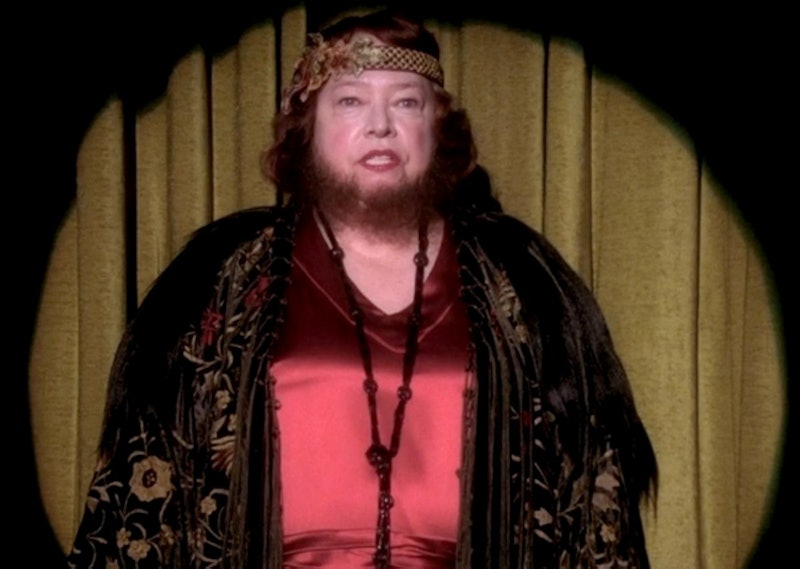 American Horror Story has always been a series noted for leaving viewers a lot of unanswered, brain scrambling questions. This season is no exception, and though I don't need an explanation for Jessica Lange's anachronistic renditions of Lana Del Rey (sad girls stick together, end of), I do get baffled at the garbled accent Ethel has. Luckily, a linguist has worked to identify Kathy Bates American Horror Story: Freak Show accent, and the explanation may just put your mind to rest. For now.

In an interview with Vox, Kara Becker, an assistant professor in Linguistics at Reed College, says that identifying Bates' accent is matter of trying to identify what kind of accent she's trying to do. According to Becker, the issue with the accent is in the execution, i.e., Bates is no Meryl Streep. Said Becker, "I don't think she's doing the best job of the accent she's attempting, as people have seemed to note on the Internet. There's some variability, and she's overdoing a couple of features." Yikes.

To go a step further, though, the accent Becker thinks that Bates is mangling is (drum roll, please!) probably from Baltimore. Becker credits the guess to the way the vowels are spoken:

The first set of features that really jumped out to me is what I would describe as the fronting of back vowels. And those are the vowels "oooh" and "oh" — I would call them "goose" and "goat" vowels, which can help with pronunciation. So a standard American English speaker would say something like "goose", and Kathy Bates is saying something like "gewse", or the words I identified in the clip, I heard her fronting her "ooh" in a word like "foolish" and in words like "you."

Essentially, she's doing a twisted Maryland accent, although as 30 Rock's Avery Jesep proves, Marylanders definitely do some weird things with their o's.

Will this be enough of an explanation to satiate the American Horror Story fandom? Likely not. Commenters and bloggers alike have made extensive guesswork about what kind of accent it is. Philadelphia hasn't been ruled out as a possibility (although I spent two years of college there and I'm going to say no) and Pittsburgh could also be an option. And as the New York Times said, the accent periodically sounds "vaguely Appalachian." Rough.

Another dark horse contender? Tom Gliatto of People notes, "It seems pretty safe that Kathy Bates never expected to play a bearded lady, let alone one with a broad Canadian accent." Now, Canadian for some reason, I could understand. A really warbled, really bad, almost minimally applied Canadian accent, because, traditionally, Canadian accents on television are peppered cartoonishly with lots of "ehs" at the end.

I suppose for now it's safe to just settle on Baltimore, albeit a Baltimore accent that may need some fine-tuning. That way we can focus on the bigger questions Freak Show lays out for us. Will we get a Taylor Swift cover before the miniseries wraps up? One can only hope.