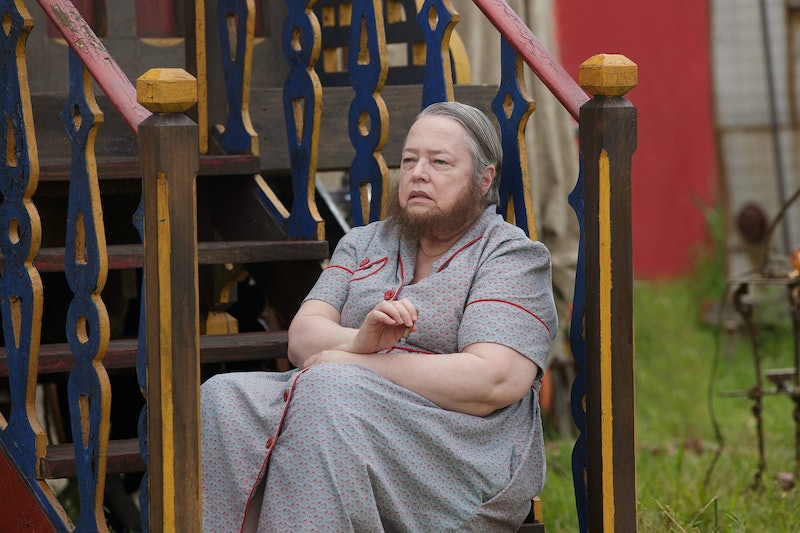 There have been many different accents showcased on American Horror Story throughout the years. Constance Langdon provided us with her Virginia-bred, Southern drawl, while Kit Walker made us swoon with his Boston dialect. Then, of course, there was always the Fiona Goode classic “KNOTTY PINE?!?!” LOL. (I doubt there will never come a time when I won’t find that hilarious.) Anyway, the point I’m trying to make is that this show has never shied away from taking on a different vernacular. And Freak Show is no exception. Though we already knew Jessica Lange’s German accent would prove to be a spot-on imitation, nothing prepared us for the vocal inflections that would make up Kathy Bates' accent in the AHS: Freak Show premiere episode “Monsters Among Us.”

So what kind of accent is Bates portraying here — or at least trying to portray? (It seemed a little inconsistent at times, no?) Though it’s a little hard to pinpoint exactly, the closest accent I can fathom is that of a Philadelphia origin. How do I know? Taking into account the trademark inflections she used on key words, I mapped out the source of said inflections and traced them back to their Philadelphian roots. Or, you know, I simply compared it to this Bradley Cooper video where he mimics a Philly accent:

Update: Some Baltimore enthusiasts have suggested Bates is attempting the Baltimore accent (see the Hairspray reference below), but I maintain Bates' rendition of whatever it she's supposed to be doing is way off.

Either way, it seems to be the closest representation out there, so if we ever see Ethel eating a cheese steak, we’ll know for sure. But as much as I love Bates and all the talent she brings to the show, this particular accent that she’s concocted really does nothing to heighten Ethel’s appeal, at least for me. In all honesty, I’d like her just as much without it. And probably then, I wouldn’t find myself so distracted during her performance by trying to pin down what kind of accent that’s supposed to be. But what’s done is done, so why obsess over it? Probably because I can’t ever let anything go — at least not without having a little fun first.

So just in case you’re not totally convinced Philly is the only ingredient in Ethel’s accent recipe, here are a few other characters that could’ve inspired Bates’ rather unique brand of dialect.

John Travolta's Hairspray alter ego has a very distinct way of talking — something dear Ethel seems to have picked up on. If you don't think these two sound very similar, then you're kidding yourself. Or I'm in need of a serious ear check-up.

If it's there, it's really subtle, but you can almost detect a slight Cajun feel to Ethel's accent. It's not nearly as prominent as Edna's, mind you, but I can occasionally hear its presence nonetheless.

Again, this could be a bit of a stretch, but I'd be lying if I said I didn't hear a hint of Minnesota twang in at least some of Ethel's words. It's doubtful that was Bates' intention, but your darn tootin' it's there.

More like this
20 Photos From The 'Stranger Things' Season 4 Premiere To Make You Feel Old
By Alyssa Lapid
Marvel's 'She-Hulk' Trailer Is Finally Here & The Hulk Lends A Big Helping Hand
By Grace Wehniainen
Everything To Know About Marvel's 'Echo' Series On Disney+
By Grace Wehniainen
Will Viewers Revisit Welcome To Eden For Season 2? What To Know
By Kadin Burnett
Get Even More From Bustle — Sign Up For The Newsletter