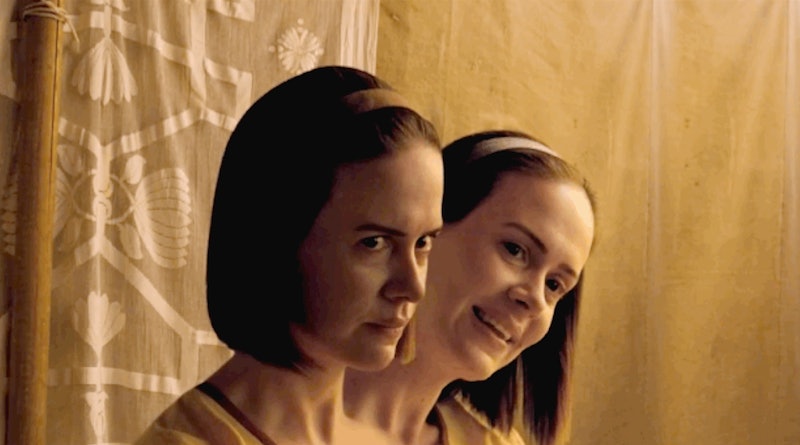 Ryan Murphy isn't one to totally explain his logic at every step of the journey, whether we're traipsing through New York with Rachel Berry or navigating the strange moral implications of American Horror Story: Freak Show. But we usually get a pretty solid indication of whether or not his embattled heroines have special powers (Rachel can sing Barbra Streisand songs like she grew up in a vocal academy and Coven's Zoe has a lethal vagina — these things we know), but Bette & Dot are different. AHS ' conjoined twins seem to hear each other's thoughts throughout the first episode, but last week, that idea seemed to be derailed a bit. So what gives?

Let's back up a bit first. For starters, conjoined twins aren't telepathic (though there is the case of Krista and Tatiana Hogan, conjoined twins who could hear each other's thoughts because they are conjoined at the head, per an NY Times profile from 2011) so any instance of telepathy between Bette & Dot (who are attached at the torso) doesn't seem to be pulled from reality. And while some posit that twins possess ESP or telepathic abilities thanks to stories of uncanny communication, the concept is not widely accepted by the medical community; it is not uncommon, however, for twins (conjoined and otherwise) to have hyperawareness of each other's emotions and feelings.

For Bette & Dot, the scales seemed to tip more towards reality Episode 2 of AHS: Freak Show, as Dot doesn't seem to be totally aware of Bette lying to her when Elsa comes to her bedside. Elsa and Bette whisper for a good minute about how Bette deserves the spotlight more than her sister before Dot hears the chatter and asks if Bette is talking in her sleep. Bette lies and says Elsa is there to congratulate them, but if Dot is being kept awake by the noise, wouldn't she be able to hear Bette's true thoughts and know that she's lying?

This could, however, be a gray area or a hole in the writing, as it seems pretty clear early on that Bette and Dot exchange thoughts. In their first few scenes on AHS: Freak Show, the series seems to be laying on the telepathy thing pretty thick. I've pulled a few excerpts from the conversation and the result seems to speak for itself. But being the cynical person I am, I just had to poke holes in all of it. Here goes:

Bette's inner monolog asks, Why is she being so nice to us? and Dot's seems to reply, She wants something. Dot even casts a judgemental glance at Bette, in a way that suggests she heard Bette's optimistic suggestion.

The caveat: Dot knows her sister well; that glance could have been cast simply because she's sure her Pollyanna of a sister would find this interaction exciting.

When Bette Talks Too Much

"When we lived in Alabama I saw her in Tin Pan Alley," exclaims Bette when Elsa notices her Betty Grable obsession. In her head, Dot grumbles, Shut up, what's wrong with you?

The caveat: Um, welcome to my inner monologue when my little brother says something he shouldn't, which is often. (Sorry, dude. I love you, but I needed an example.)

When Elsa Asks About Sharing Their Sex Parts

Dot thinks, Oh, dear God. She’s a psycho pervert. And Bette seems to reply, She’s down to earth is all.

The caveat: Bette could very likely mean "She's just down to earth is all" as a response to her own reservations, the way a cartoon princess might tell a forlorn woodland creature, "Oh, you're just scared, aren't you?" with very little prompting.

When Bette Offers Information About Sharing Their Sex Parts

The caveat: See (again), things we all think when our sibling is saying something that embarasses us.

When Bette Gives Away Their Guilt

Bette tries to tell a yarn to keep Elsa from learning that they are responsible for their mother's death, and the conversation goes like so:

“He was wearing a black fedora and he reeked of Aqua Velva,” says Bette.

“He strangled mama with her necklace while she was doing needlepoint,” adds Bette.

Shut up, Bette, thinks Dot and in response, Bette seems to flinch.

The caveat: When Dot is thinking her silencing thoughts, she's also shooting angry looks at Bette. It could be that Bette is reacting to her facial expressions, which are ridiculously severe, and not the telepathic ability to read Dot's mind.

So can Bette and Dot hear each other's thoughts?

The answer is still rather unclear, if you ask me. And while I could rail on about inconsistencies (Bette and Dot's doctors say they have four lungs, and yet, when Bette puffs on a cigarette, Dot coughs up smoke too, which seems to defy logic) this particular inconsistency might actually make things a little more interesting. Then again, with a show like Freak Show, interest isn't exactly something we're running low on.