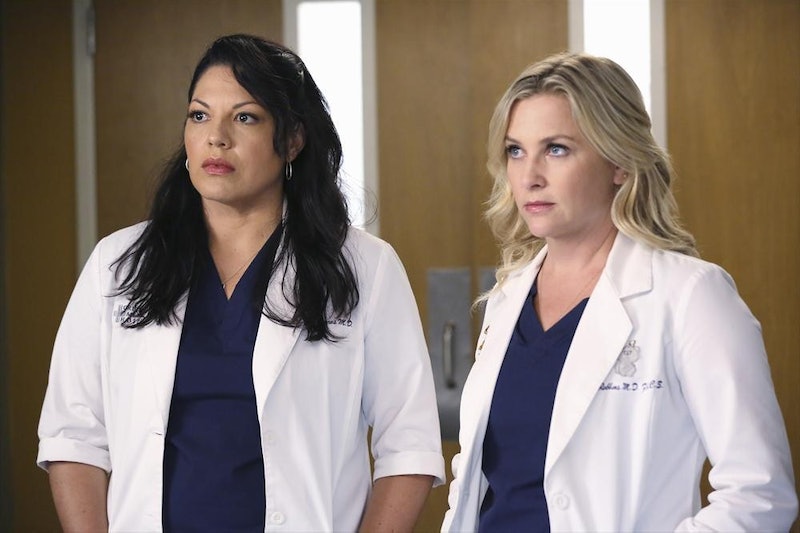 After loyally watching her shows for the past 11 years, I am well aware that I should never get too attached to any couples whose romance has been contrived by Shonda Rhimes — but I always do anyway. And now, as much as I hate to admit it, it definitely looks like Grey's Anatomy couple Callie and Arizona are about to break up once and for all. They started off the season optimistically hoping to adopt their second child, but so far, it doesn't seem like that's going to pan out. And according to all the spoilers that have been released involving the pair, their relationship ultimately might not pan out either.

This Thursday's episode, "Bend and Break," surrounds Callie and Arizona and their struggling relationship. They're in therapy, and apparently, it's not going too well, because a sneak peek released for the episode shows Callie and Meredith drinking to ease the pain of their troubled marriages. And if the editing of said sneak peek is to be trusted, Callie and Arizona are about to go 30 days without talking or having sex to see if a break helps improve the state of their relationship. If it works, I'm all for it... I just hate seeing these two at odds.

However, before anything can really get better, Arizona and Callie have to do things like take breaks and go see their therapist, because there are deeper issues in their relationship that have been ignored and patched up. It didn't end up fixing anything — those issues are still there, they're just buried.

"Callie and Arizona are basically not communicating," Sara Ramirez told Entertainment Weekly . "Callie has some resistance towards therapy, but therapy turns out to be a great place to air grievances and concerns and to also bring up the miscommunication that has led them up to this point. They definitely get a chance to clear up some stuff.”

And I can't say that we shouldn't have seen this coming. Before the season even aired, though, Rhimes warned us that all would not be well in Callie and Arizona's universe. Speaking to Entertainment Weekly, she said that things could go either way.

I'll be honest with you and say that there is literally a 50/50 chance that they'll be together or apart, and I have not figured it out yet. We really spent a lot of time in the writers' room mapping it out and talking about it. We've really mapped out what we think is going to be a really nice journey for them.

If I didn't know any better, I'd take the words "nice journey" as a sign that they're going to be together forever, but I really don't think things are looking too good. And it sucks. But in all the ways Grey's hasn't managed to be realistic lately (random long-lost sister, I'm looking at you), this is one of the few times it's hit the mark. No matter how much two people love each other, when a transgression like cheating comes into the mix, love might not be enough to put things back together again. And as much as I enjoy Callie and Arizona's many cute moments, which some of my favorite scenes on the series, seeing them fight has always been a heartbreaking experience — mostly because it just feels so real.

I'm keeping my fingers crossed that by the end of the season, they find their way back to each other. But just in case that doesn't happen, we should probably prepare ourselves now. Can someone pass the tissues and ice cream?