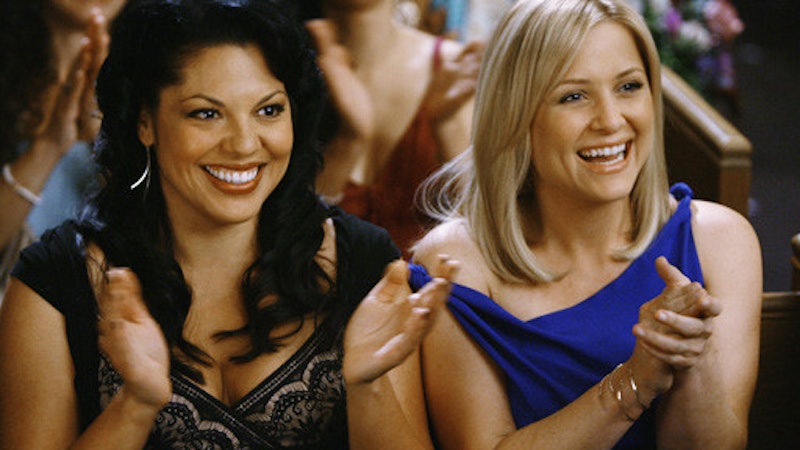 Of all of the relationships that are riding the Hot Mess Express on Grey's Anatomy, Callie and Arizona are at the forefront. Sure, their marriage is doing way better than it has been in the past, but they've had a lot to overcome. Cheating, a plane crash, a missing leg — you know, the usual Grey Sloan Memorial Hospital fodder. No big deal. But when we left them at the end of Season 10, Calzona had decided to try for another baby. Um, that may not exactly be the best idea when you're trying to regain your footing in a troubled marriage, but they're going for it anyway. The real question is this: Will they ever actually get the baby they're hoping for?

As much as I would love a little brother or sister for Sofia, and as much as I'm obsessed with Callie and Arizona's relationship and want it to last forever, I'm not totally sure that either of those things are going to happen. In Shondaland, when there's an option for drama or a happily ever after, the scales almost always tip in drama's favor. So are Callie and Arizona becoming moms for a second time or aren't they? Let's examine the evidence.

They may be getting turned away from an adoption agency

According to casting sides that allegedly leaked over the summer, two characters named Joseph and Susie (likely stand-ins for Callie and Arizona), meet with an adoption agency to put their hats in the metaphorical baby ring. And although the agent likes them, she has to reject their application unless they're willing to do some couple's counseling to ensure their relationship is stable enough to bring another baby into it. Of course, just because one agent says no doesn't mean that's a definitive answer — after all, there's still surrogacy, as well as other adoption agencies in Seattle, right? But if this first meeting does happen this season, it doesn't bode well for their chances.

When E! asked Jessica Capshaw (Arizona) about the fate of Callie and Arizona's future baby, she wouldn't give a straight answer — or an optimistic one.

We left them talking about it and that's where we pick up with them talking about it. There's not much more than can happen to them that hasn't happened to them yet, but Shonda can think of something! So far it's been really interesting because so many of the things that I think didn't get dealt with in terms of the core part of their relationship is being dealt with in the beginning of this season. It's up and it's down and it's all around.

Ugh. It's really not looking good.

Yeah, speaking of that relationship drama? The baby is just a temporary solution for a bigger problem. If Callie and Arizona think their marriage is totally repaired, they're wrong —Shonda Rhimes told The Hollywood Reporter that there's way more work that needs to be done.

Yes, it is a Band-Aid. It's going to be revealed very quickly that it is a Band-Aid. How could it not be? I don't know if anybody could watch that and go, 'Oh yeah, that's the answer for them.' How could Arizona say, 'Yes, I could have a baby but I don't want to' and not feel like a Band-Aid for whatever is going on with their relationship.

Sorry, Sofia. You might have a little more waiting to do before you become a big sister.