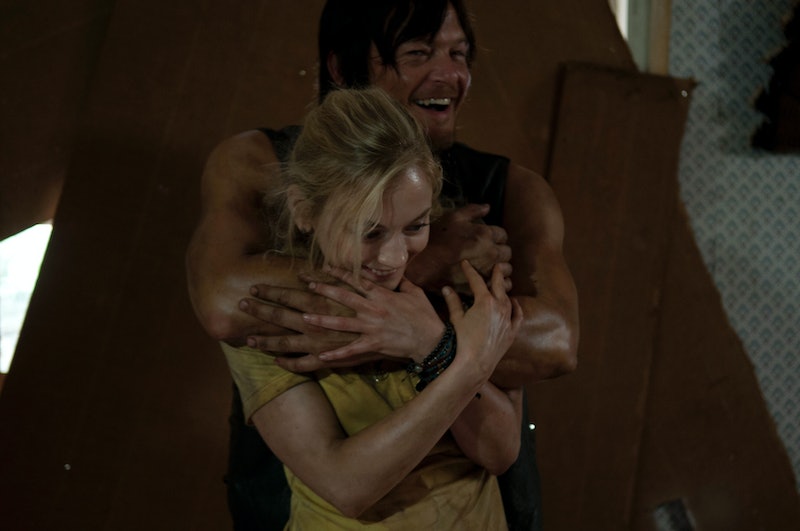 There have only been two episodes in Season 5 of The Walking Dead, but things are already getting crazy. Last week, Daryl and Carol went after Beth and everyone has been speculating that there will be a "romantic" reunion for Daryl and Beth, but I am hoping that these rumors are put to rest soon. Just because it's the zombie apocalypse, that is no excuse for a grown man to get with a teen girl (last I checked, Beth was definitely not 18!). So, listen up, Beth & Daryl 'shippers: Daryl can hook up with anyone but Beth. He’s basically like her dad.

Of course, their relationship is dramatic, don't get me wrong. Things are spiraling out of control on The Walking Dead, so ties are bound to be strong. Last week, we finally met Father Gabriel and things got pretty crazy. As the team prepped to go to D.C., Bob went off on his own for whatever reason and got captured by the hunters, who subsequently chopped off his leg and ate it for dinner. (I still have not been able to get the sight of creepy Gareth eating the meat from Bob’s leg out of my head. I just got chills.) Carol and Daryl found a working car (I still don’t understand how any cars are still running at this point) and as they were heading back to the church, the car that took Beth drove by. Naturally, Daryl and Carol are now chasing the car down. So, can we expect a Daryl and Beth reunion soon?

Considering Beth wasn’t in any of the previews for next week, I would guess that this week will be heavily focused on the team finding Bob and Carol & Daryl's search for Beth. However, Beth fans can rejoice because according to the episode 4 logline, the whole episode will focus mainly on where she has been (spoiler alert, she’s in a hospital) and maybe show the Daryl and Beth reunion people have been waiting for.

But the romance part still won't go away. During a Reddit AMA with with producer Gale Anne Hurd, someone asked the inevitable question about Beth’s storyline. Hurd responded in a way that fueled the 'shipper fire:

I think you’ll be amazed by Beth’s journey this season, and the challenges she’s going to face ... She’s had to grow up so quickly, and I think Daryl really helped her along that path, don’t you?

Well, the same could be said for anyone that hands you your first sip of alcohol, and yes, the zombie apocalypse does make you grow up faster, but that doesn’t mean there should be a romantic storyline between a man and a teen, 'shippers. Unfortunately, they can take creative liberties on the show since Daryl isn’t in the comics and doesn’t have a specific plot to follow.

To add fuel to the fire, Emily Kinney told Entertainment Weekly that there was a special something between Beth and Daryl:

Despite the alone time that Daryl and Beth had last season, Carol is back and in a weird way, I think Carol and Daryl should hook up. There’s been sexual tension there for a long time. Plus, that hug in the Season 5 premiere? Oy, that was so emotional. Let's stick to that storyline — OK, AMC?