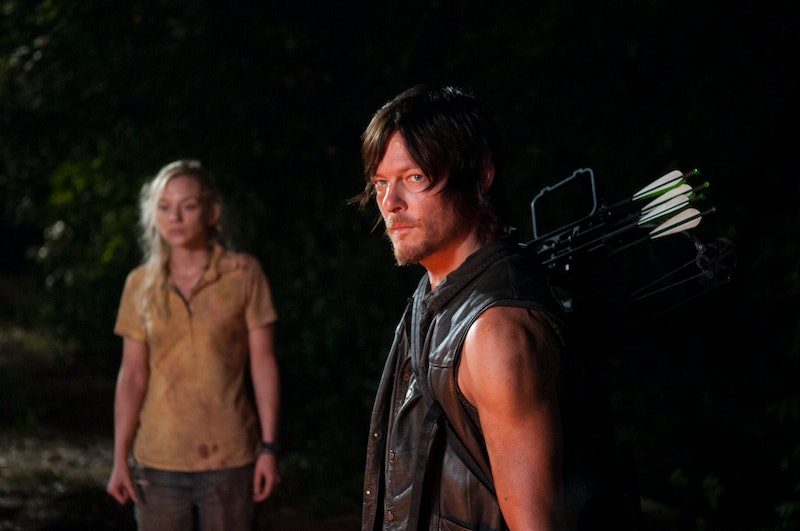 The Walking Dead showed us a very interesting pairing last season with Daryl Dixon and Beth Greene. After the Governor attacked the prison (again), our favorite band of zombie killers was forced to flee their cellblock home, Norman Reedus's Daryl and Emily Kinney's Beth joined forces. And then the show developed their relationship to become much deeper than expected, which made it all the more crushing when Beth was captured in the Season 4 episode, "Alone." Although there are many theories on where Beth is, we haven't seen her since. But it was confirmed that Beth will return for The Walking Dead Season 5, so what does that mean for Daryl and her?

In the episode before Beth was kidnapped, "Still," we followed Beth and Daryl throughout the entire episode on Beth’s quest to get drunk. She even was able to get Daryl to open up about his past. Now, I wasn’t always a fan of Beth’s wisdom (I know she's currently living through the zombie apocalypse, but just 'cause you're Hershel's daughter, doesn't mean you always got the goods to back up your life lessons), but it was nice to see Daryl’s darker and softer sides with a character other than Carol.

We also learned a few additional things from "Still":

(Also, can we just discuss how Beth would have been wasted?? They were drinking moonshine, she weighs like 100 pounds, she never really has drank before, and the rattlesnake that Daryl caught in the beginning of the episode didn’t look that filling.)

If we can focus on the fact that their relationship is purely like a big brother-little sister one (at least it better be), their moments together were kind of touching. So in the next episode, when a herd of zombies attacked the funeral home that Beth and Daryl had been staying in and Beth was taken captive by some unknown people (person?), it was heartbreaking.

Daryl and Beth found a funeral home that also was a great house, but didn't it seem too great? That house seemed too clean and too well-stocked not to have some people attending to it very recently. But Beth had broken Daryl down — the ever-roaming Daryl was ready to stop wandering.

It wasn't a bad idea for Daryl and Beth to lay low for awhile, but Daryl became content to just stay in that sweet house filled with delicious canned goods and lost his edge. Could the people who took Beth be connected to the house? Showrunner Scott Gimple explained that there was an innocent backstory to the funeral home on The Talking Dead Season 5 preview special earlier this month, but I'm not buying it. The Father Gabriel theory seems more and more promising.

Regardless of who actually took Beth, seeing poor Daryl run after the car that Beth was taken in until he collapsed on the street was devastating. Daryl is obviously one of the best (if not the best) characters on the show. He’s always tough, he’s always badass, and he always survives. Despite his complicated relationship with his brother Merle, I think losing the vulnerable Beth not so far after losing Merle hit Daryl particularly hard. Although he encouraged Beth to be more self-sufficient, he ultimately feels responsible for her disappearance.

Season 5 of The Walking Dead will not be back on until Oct. 12, but it will be an intense dynamic when Daryl tells Maggie what happened to Beth now that everyone is stuck in the train car in Terminus. He just told Rick that she was simply “gone,” but that explanation is absolutely not going to fly with Maggie. Let’s hope things don’t get too heated in that train car.

Once they do get out of the train car, I'm sure both Daryl and Maggie are going to make finding Beth a top priority. Daryl is a top-notch tracker, and with Maggie's tenacity, the pair could successfully locate her. And if they do find her, what will Daryl and Beth's relationship be like when they aren't on their own? I'm hoping they can keep their close friendship (and let me emphasize the word "friendship"), since it will help them both grow emotionally. And saving Beth better not lead to Daryl dying. They've both lost family members and have had a rough time since they've parted — they deserve to have a friend right now.

More like this
Will 'The Walking Dead' Return For Season 12?
By Grace Wehniainen
Theo James Revealed The Truth About His 'White Lotus' Nude Scene & Fans Can't Cope
By Stephanie Topacio Long
The 'Kenan & Kel' Reunion On 'SNL' Took A Dramatic Turn, Thanks To Keke Palmer
By Brad Witter
Keke Palmer Just Announced She's "Going To Be A Mom" On 'SNL'
By Brad Witter
Get Even More From Bustle — Sign Up For The Newsletter