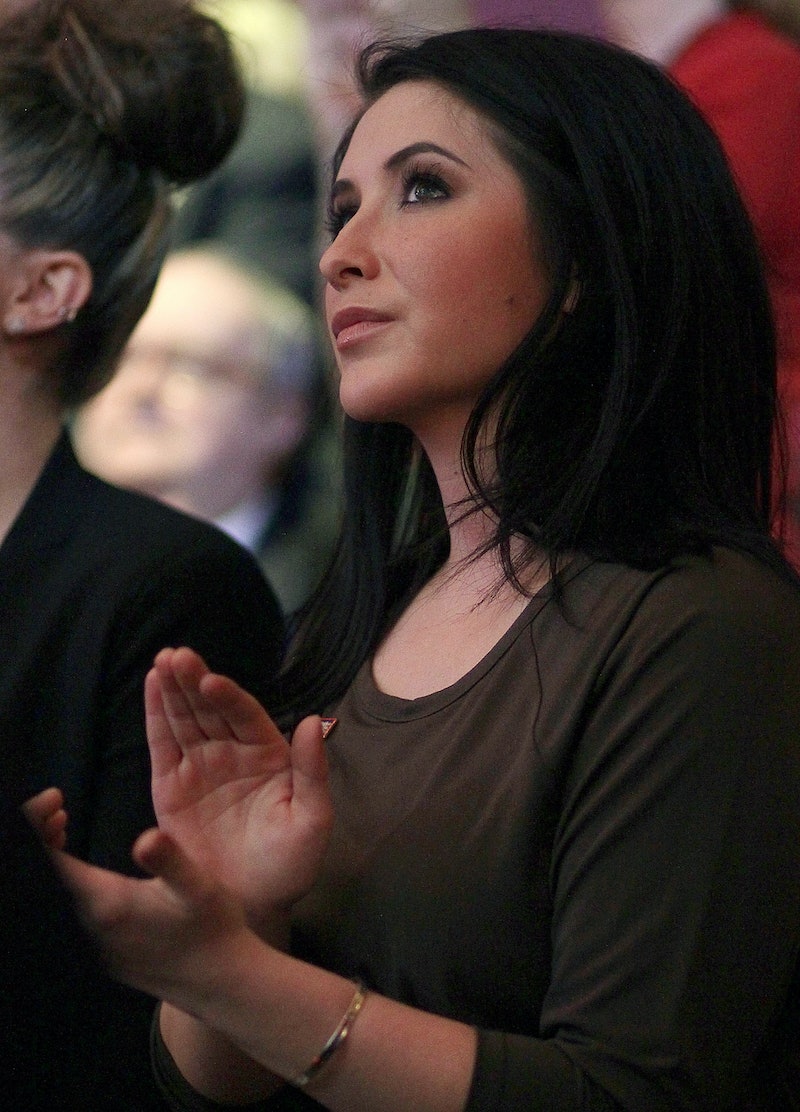 In September, news broke that the Palin family was involved in a drunken brawl during patriarch Todd Palin's birthday party. In the wake of what she calls false reports, daughter Bristol Palin is speaking up about what really happened that night. According to Bristol, a family friend was punched and a party-goer was live tweeting it in order to "get famous." Her younger sister Willow saw this and told the tweeter's mother to "get ahold of [her] son." The woman allegedly responded by shoving Willow.

"By this point, I'd already gotten into the car," Bristol wrote in a blog post. "But when Willow ran to me crying, telling me that some lady had pushed her down, I got out of the car to go talk to her. Any big sister would do this. Next to God, family is the most important thing to me."

So Bristol went to confront the woman when she was stopped by "a guy in his late thirties or early forties" who allegedly called her a slut and a c**t. "But it got even worse when this guy started pushing me ... He was towering over me — probably at 6 foot something and over 200 pounds," she recounts. "He had his hands on me, pushing me down. That's when I swung and hit his face."

Eric Thompson, a guest at the party, originally reported that Sarah Palin's daughter hit the man "in the face like six times; it was an assault if I've ever seen one. It wasn’t a light punch either. She was really hitting him."

But Bristol disagrees with his version of the story.

I didn't 'swing and hit him seven times with a strong right hook' as so many so-called news stories have reported. After this incident, I still had a perfect manicure on all ten of my nails. Plus—I'm left handed. I wouldn't even begin to know how to begin 'swinging' at someone.

Instead, she's sticking by her one-punch out of self defense story. "Some would say I should've never retaliated in defense against him, but certainly he should never have pushed a girl," she wrote. "He pushed me down to the ground and kept me there. It was scary and awful. He held me down until someone got me out of the situation."

If that story is true; that is awful. Unfortunately after news of the fight broke, many people made jokes about it.

And TMZ laughed it up about Bristol's camo party dress and how America was lucky not to have this hillbilly family in office. But joking about violence is wrong, even when it seems like the Palins are an easy target. As Bristol points out in the end of her post, "Violence against women is never okay... Even if that violence occurs against conservative women."

You can hate the Palins and their politics all day long, but this type of attack should always be taken seriously. For Bristol to have allegedly been pinned down by a man twice her age and size must have been terrifying. No one deserves that, regardless of party lines or family affiliation.