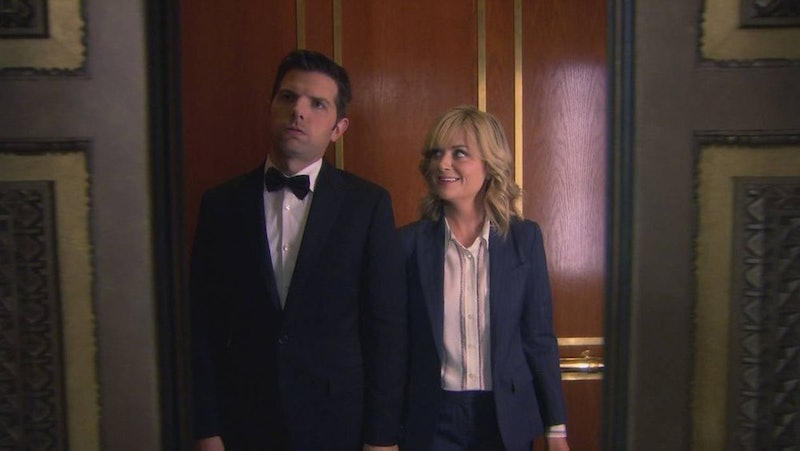 Ben Wyatt, if you're reading this, I have good news. Your prayers have been answered. Your dreams have been fulfilled. You have made calzones cool. At least it looks that way in recently released spoiler photos from Parks and Rec Season 7. Other than the obvious and exciting campaign buttons both Ben and Leslie are sporting that suggest Ben could be running for governor in 2017, there's another piece of information from one photo that must be discussed: The gigantic calzone Ben is holding at the microphone and his apron that reads "In The Zone." Could it be that thanks to Ben, calzones have become the number one new favorite food in Pawnee or possibly even all of Indiana? Could it be that calzones are no longer, as Leslie once put it, "pointless"?

We all know that Ben has some strange ideas and interests, both business-wise and life-wise. For example, he wasn't a fan of Peter Jackson's interpretation of The Lord of the Rings and once worked really hard for six weeks to make two seconds of "claymashe." But his love of calzones has been a Ben Wyatt staple since the first moment he brought them up to the Parks and Recreation department as a substitute for a police officer party. Despite mini calzones betraying him by giving him food poisoning while Ben searched for a wedding meal for him and Leslie, these pictures suggest he no longer harbors hatred for the bread stuffed with meats and cheese. In fact, he's flourished with them by opening a business that seems to be burgeoning. My only complaint: "In The Zone" is so much lamer than "The Low-Cal Calzone Zone," but I guess simplicity is key in opening a successful calzone eatery? While we all ponder how many different types of calzones Ben has created, (do you think he has dessert flavors? Weird…), let's take a look back at our favorite nerd's weirdest and most endearing interests and business ideas in the last four years.

The game of games that secretly became a cult phenomenon thanks to Ben's former colleague Barney, who is not-so-secretly obsessed with Ben. It might actually become a real game soon, believe it or not, and there's no way I'm not playing. Who's with me?! And who wants to be the Ledgerman?

"Requiem For A Tuesday"

If Ben had actually finished this claymation project after he resigned in disgrace, I'm pretty sure it would have been awesome.

To be fair, he's right to get upset. NO ONE would ever dare to cancel Game of Thrones. And name one other Game of Thrones fan that wouldn't freak out to sit in the Iron Throne.

This is a guy who took a job as an accountant at an accounting firm for a little while. As Jean-Ralphio once so eloquently put it, at the boring office, he's the one with the most boring job.

Again to be fair, everyone likes Batman right? Maybe not enough to buy an incredibly detailed costume, but still.

We'll just have to wait to find out exactly what's going on with Ben's calzone eatery and his potential gubernatorial race. However one thing is for sure: Ben might not be the most popular or cool man in Indiana, but he works hard and would make a great leader. And a great calzone business owner.