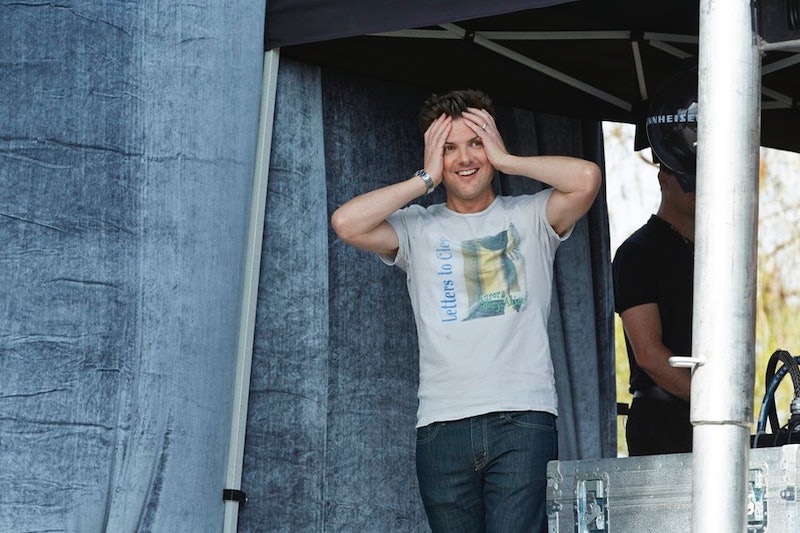 Holy calzones, Batman! We knew that something was up with Ben Wyatt when he appeared in an ominous tuxedo in the final scene of last season's Parks and Recreation finale. The flash-forward promises many changes for our favorite Pawnee Government Employees, but this is unexpected. Pause your Parks re-watch, because I am about to drop a Paunch Burger-sized bomb on you. New filming photos released by PopSugar suggest that Ben is running for Governor in Season 7. The photos show Adam Scott and Amy Poehler standing before a crowd, wearing buttons that read "Wyatt for Governor." Say what? With all the job changes Ben has been through on this show, from auditor to City Manager to amateur claymation artist and Cones of Dunshire architect, this one is completely nuts. What does it mean for the show? What does it mean for Leslie?

I like that Parks and Recreation hasn't forgotten Ben's own political aspirations. He may have been a failed kid mayor, but his responsible public service work was supposed to gear him up for returning to office one day. That desire is something he recognized instantly in Leslie. It was the first time they connected. With Parks in its seventh and final season, I'm happy for him that he's able to achieve that. Of course, Governor is a big step. You don't just announce that without credentials. Are you thinking what I'm thinking? I think that three years into the future, Ben is already Mayor of Pawnee. That would certainly explain the tux. Maybe they were going to his swearing-in ceremony in that final scene.

Last season's finale made a big deal about Leslie Knope being able to take her new swanky job as Regional Director of The National Parks Service and still live in Pawnee, the greatest city in America. So for that reason, the implications of Ben running for Governor are a bit worrisome. If he wins, they'd probably have to move to the capital. I don't know what the living expenses are for your average Governor's Mansion, but I would assume that you have to put in some time there and couldn't afford to have dual residencies.

Ben Wyatt and Leslie Knope are one of the most supportive couples on television right now. It has been a real treat to watch them grow together and strengthen as a team. Is this going to be what finally gets them out of Pawnee? Do I even want that for Leslie? They are a power couple, so there's probably no cause for concern.

Of course, there is a splinter of a possibility that Leslie Knope changed her name legally to Leslie Wyatt and she's the one running for Governor, not Ben. The former Deputy Director and City Council member might want to run for office with a clean slate. The name Wyatt might say "Ice Town" in Minnesota, but the name Knope has more negative connotations in Indiana. However, I don't think that's likely. Leslie Knope may not have the cleanest record, but she does have pride.

More like this
The ‘Emily In Paris’ Season 3 Release Date Is Here, Plus The First Footage
By Bustle Staff
The ‘You’ Season 4 First Look Shows Joe’s New Identity And Potential Victims
By Bustle Editors
New ‘Lupin’ Part 3 Teaser Hints That Assane Will “Go Out In Style”
By Brad Witter
The First Clip From Netflix’s Queen Charlotte ‘Bridgerton’ Prequel
By Bustle Editors
Get Even More From Bustle — Sign Up For The Newsletter