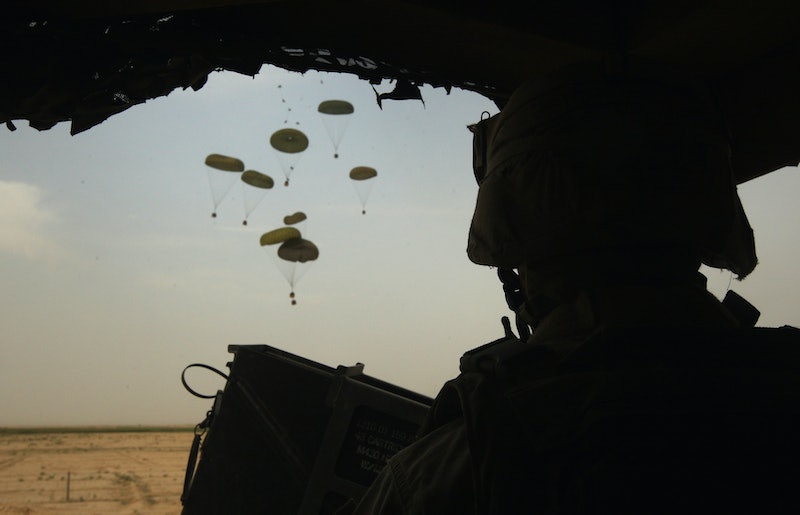 Well, that didn't go according to plan. This week, the U.S. tried to send reinforcements to Kurdish fighters helping to combat ISIS on the ground in Syria, only to have their shipment get delivered to the wrong address. NBC News reports the U.S. airdropped dozens of pallets into Syria intended for the Kurds, but one bundle of U.S. weapons landed in ISIS hands. The terror group posted a video of their fortuitous discovery to YouTube, revealing their new possessions. In response to the cock-up, the Pentagon essentially shrugs.

In the ISIS-posted video, boxes from the bundle are lined up in the desert as a militant opens one after another to reveal a treasure trove of grenades and other weapons. The authenticity of the video is still being confirmed, but Pentagon spokesman Col. Steve Warren said at a press conference that the video was likely legitimate. This certainly wouldn't be the first time ISIS got its hands on U.S.-provided military equipment. In the past, ISIS has appropriated everything from American humvees to cargo planes to machine guns.

On Wednesday, the Pentagon admitted that one of the airdropped weapon pallets was intercepted by ISIS, noting that it was only one of 28 total and the Washington Post reveals that a second bundle that had also veered off course was successfully destroyed by the Air Force.

Not only is that not reassuring, Pentagon officials have taken a decidedly indignant stance with the situation. Instead of owning up to their mistake, they've done everything from blame the wind to play off the severity of the blunder. Warren said at the conference that "one bundle worth of equipment is not enough equipment to give the enemy any type of advantage."

Pentagon spokesperson John Kirby also addressed the situation, but not only did he refuse to apologize, he also took the opportunity to boast and do his best Roger Goodell impression by repeating the same things over and over again. Here is a breakdown of Kirby's statement to the press.

We are very confident that the vast majority of the bundles did end up in the right hands. In fact, we're only aware of one bundle that did not....

And again, for emphasis?

The vast majority of the bundles, we know ended up in the right hands.

In fact, it's a reliable method ... usually.

It's a very safe, effective, and efficient way to deliver supplies.

Instead of apologizing, the Pentagon pats itself on its back.

I don't think that anybody in the Pentagon is going to apologize for conducting the mission the way it was done.... We're very good at air relief. Very good at it.

And one more time, in case you missed it the first time.

And it was deemed the best, most efficient, effective way to get the supplies in. This is the decision we made and we took it.