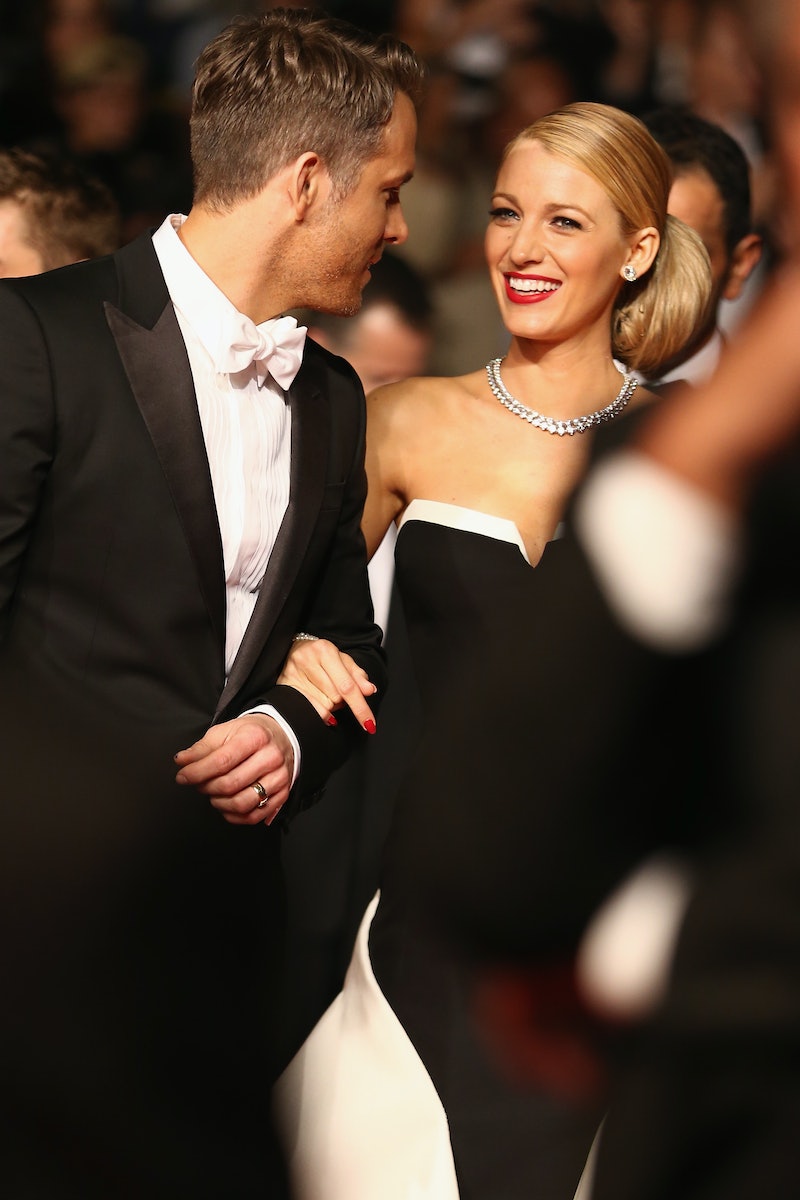 With all the baby buzz, not to mention cute maternity outfits, all eyes are on soon-to-be parents Blake Lively and Ryan Reynolds recently. The two are just so good-looking it seems almost unfair, and now they’re going to be ridiculously rad parents to a wee him or her in a few months. Just by looking at Lively’s Preserve website, it seems to me that the twee Lively-Reynolds will be living a life of Mason jar baby bottles and hand-whittled toy ducklings. Also, it will be perpetually fall. It’s a Pinterest-worthy life we can all covet, but of course I’m left wondering how exactly these two attractive blondes came to be a couple? Exactly how did Ryan Reynolds and Blake Lively meet?

Not that I have anything against Reynolds, but I always thought that Lively and her Gossip Girl costar Penn Badgley would make it through the teen drama as the real life OTP — because obviously the show’s OTP crown would go to Chuck and Blair — so I was in stark denial when they broke things off, but surprisingly, she didn’t immediately date Reynolds afterward. Despite Lively and Reynolds already being close after working together on Green Lantern, the two were seeing other people at the time, and when they broke off those relationships, they went on to date other Hollywood elites, before realizing the inevitable. Actually, all of the juicy gossip about their love lives leading up to their marriage is very much in the same vein as my favorite fictional societal blogger, Gossip Girl.

March — Spotted: Two gorgeous blondes bonding on the set of Green Lantern. Lively and Reynolds meet while filming the DC superhero flick and become friends on set. Wonder if they'll keep in touch after filming? (Spoiler: They do, and their relationship lasts longer than any hype for this movie.) I'd say there could be a love connection here, but Lively is dating Penn Badgley, and Reynolds is married to Scarlett Johansson.

October — Word on the street is that Lively was seen with The Notebook hunk Ryan Gosling in Disneyland, thus making it the happiest place after all. Fans saw them sharing ice cream in the park and took pics with them, but the actors refused to be in the same photo.

December — Tipsters say they saw Lively make a sly entrance for Gosling's Blue Valentine NYC premiere. Rumor has it that the pair are "casually dating." (This reportedly only lasts for a couple months.)

December Part 2 — Big news, everyone. Reynolds and actress Scarlett Johansson got divorced. They'd been married since 2008, and before that, Reynolds was engaged to Alanis Morissette from 2004 to 2007. Reynolds is sure down on his luck in the love department.

March — All of the world's a stage and Reynolds and Lively are running it as the pair reunited as press tours rev up for Green Lantern. They even hit Comic Con together.

May — Spotted: Serena van der Woodsen's real life counterpart getting cozy on Steven Spielberg's yacht with none other than Leonardo DiCaprio. Is this just a summer fling or are they a match made in Monte Carlo?

June — Reynolds and Lively complete their press rounds with the premiere of Green Lantern, and we all see how cute they look together on-screen and on the red carpet.

July — Can it be? Is Reynolds dating actress Charlize Theron? Because according to Us Weekly, these two were dating for months before rumors started to surface. Sources saw Reynolds' motorcycle outside her home. That's enough to leave us all whispering.

October — It looks like Lively and DiCaprio were just having a bit of summer fun. Despite partying at Cannes together, spending June at his LA home baking, and traveling to Venice in August, the pair surprised everyone by bringing their International PDA to an impasse.

Late October — What have we here, Upper East Siders? Lively was spotted in Boston, leaving Reynold's apartment and later visiting him on the set of R.I.P.D., a day after filming Gossip Girl in New York. And apparently they were getting into the holiday spirit together too. They were caught celebrating Canadian Thanksgiving at a nearby restaurant that evening.

December — While you've been busy decking the halls and donning your gay apparel, Lively and Reynolds have been seen traveling to Vancouver, Canada to spend some time with his clan. It looks like these two are getting close.

September — Nothing gets past Gossip Girl, but then again there's a first time for everything. Reynolds and Lively surprised everyone by secretly marrying in Charleston, South Carolina after a year of dating. Martha Stewart helped with the decorations and photos of the dessert bar and a glimpse of Lively's wedding dress made it on the lifestyle queen's website.

There's also speculation on whether Lively is pregnant or not. Spoiler: she isn't.

May — The couple shows that they can do no wrong when it comes to dressing up spiffily in Cannes.

October — Spotted: Blake Lively holding her belly in a very motherlike fashion on her website. The two always did want a big family. Congrats to both of them. XOXO, Gossip Girl.