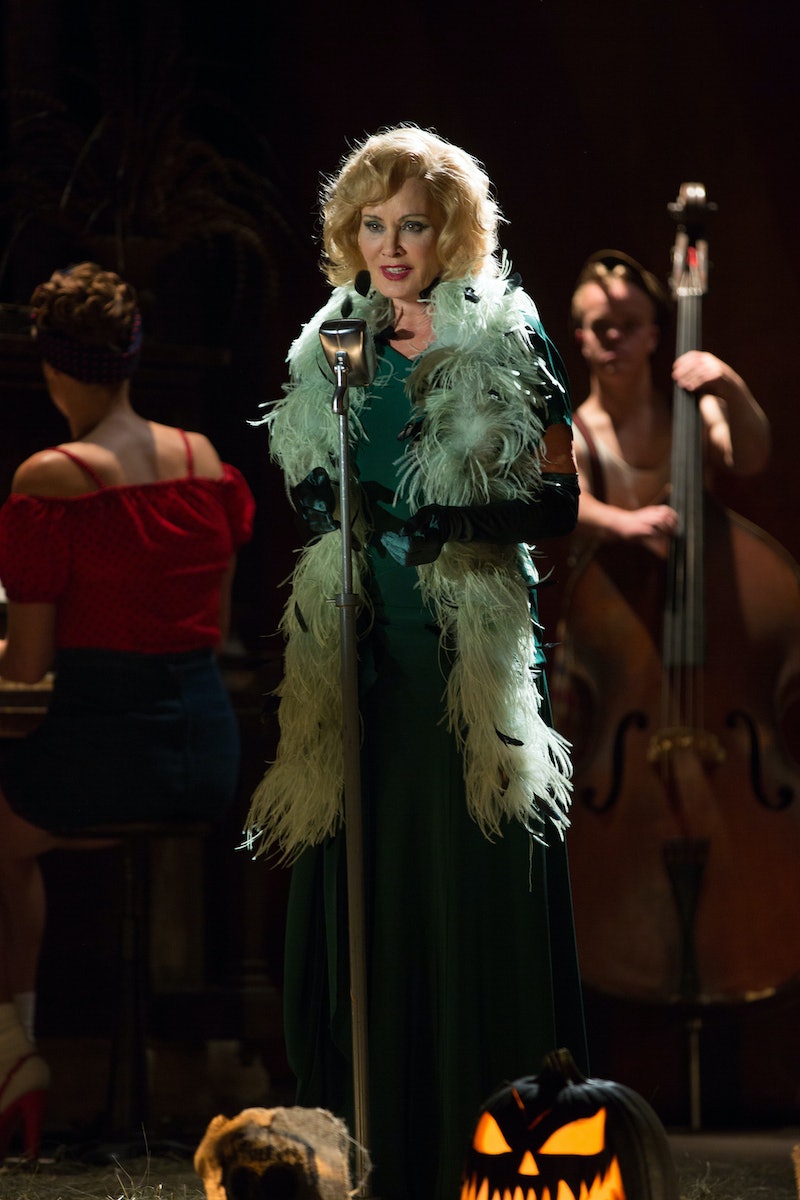 No, you haven't accidentally switched over to a dark and twisted episode of Glee, though I could totally understand the confusion. American Horror Story: Freak Show has delved deeper into the musical realm than any prior season ever has before. First, we witnessed Jessica Lange sing David Bowie's "Life on Mars?," followed shortly by Sarah Paulson's Bette and Dot characters belting out Fiona Apple's "Criminal." However, in Wednesday night's Halloween episode "Edward Mordrake: Part 1," this FX thriller broke the mold when it showcased Lange's Elsa Mars covering Lana Del Rey's "Gods & Monsters," which can only be described as utter perfection, to say the least.

Seriously, Lange truly outdid herself this time. Between the glamorous wardrobe and sultry lyrics, it's no wonder this epic performance was capable of raising the dead. More specifically the spirit of the two-faced urban myth, Edward Mordrake (played by the facial hair wonder that is, Wes Bentley), who seemed just as captivated by Lange's powerful vocals as the rest of the world. (Also, is anyone else kinda 'shipping these two after this scene or have I officially crossed over to the dark side? Either seems equally possible at this point.) Let's just say that I don't exactly hate the idea.

And while viewers shouldn't expect there to be a musical number every single episode (though right now that really does seem to be the pattern), Ryan Murphy has promised that there's still a few more performances in Freak Show's arsenal, including an eventual Kurt Cobain cover. Naturally, Murphy has yet to reveal which song it'll be, but I'm personally hoping for "In the Footsteps of the Dead" or "Wasted Life." (Though, "Mercury Rising" would fit in with the whole outer space theme. First Mars… now Mercury.) Either way, I can't wait to see what the series has in store for my iPod next.

But as we wait for that miraculous day to occur, let's focus on what we can obsess over in the present day, and that means watching all three of AHS: Freak Show's musical performances until our hearts content, which is pretty much what I've been doing since Day 1. Though they're all pretty spectacular in their own right, here's a ranking of all three numbers from my least to most favorite — a Sophie's Choice-type of situation if there ever was one.

Though I love Paulson's vocals (not to mention just this song in general), for me it didn't have quite the same spectacular feel as the other numbers. Maybe it's because one twin was acting so timid and really didn't get into it enough? I'm not exactly sure. But I have a feeling if both Bette and Dot let loose it could turn into quite the must-see event.

The blue suit and matching blue eyeshadow — what's not to love? David Bowie may only have been 5 years old at the time this is supposedly taking place, but rest assured he would've been proud to see Lange bring those lyrics of his to life — on both Mars and Earth. Also, if he could make a cameo at some point this season that would be great. kthxbye

There is nothing I don't love about this performance. Equal parts seductive and creepy, this little rendition deserves a standing ovation after each and every viewing. Now, if you'll excuse me, I have to go watch something for the one billionth time. BRB.