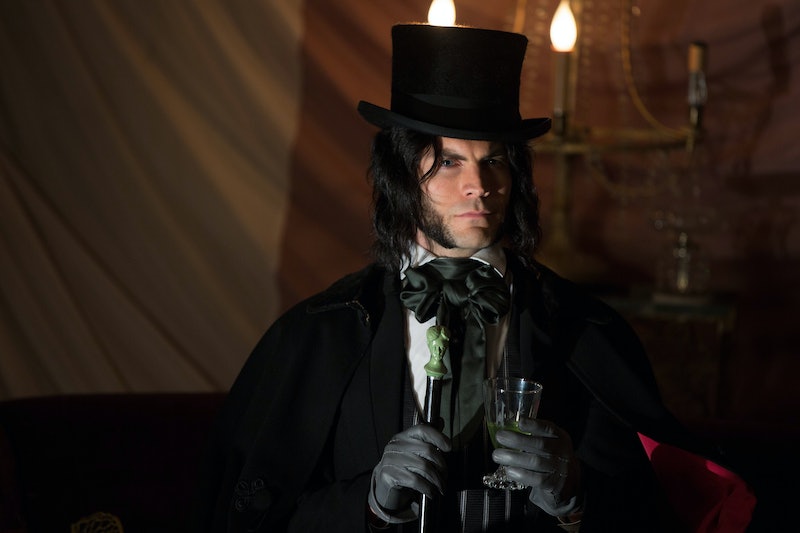 Once Ethel Darling told the story of one Edward Mordrake, the outcome of AHS: Freak Show's third episode was something of a forgone conclusion. The legend goes that Edward Mordrake had an extra face on the back of his head that just so happened to be evil. Long story short, after trying to kill the face over and over, he went nuts, killed his fellow freaks, and now, freaks don't perform on Halloween for fear that he'll show up and take a freak back to hell with him. Naturally, Elsa couldn't resist the spotlight, Mordrake is here, and all we can ask now is which AHS freak will die so he can return to his resting place?

The truth is, this is a ridiculously tough question. Ryan Murphy has said death will be for keeps this season, so whoever dies is going to be a serious loss. That eliminates Jessica Lange's Elsa, Sarah Paulson's Bette & Dot, and Evan Peters' Jimmy Darling (who was recently posing for photos on Instagram on the set of AHS: Freak Show). The Strong Man clearly has more story to tell and Ethel seemed to be deemed unworthy of Edward's rage at the end of "Edward Mordrake (Part 1)."

Still someone has to go, and it has to be someone that stings when they leave. It can't be one of the random newbie freaks that showed up this episode — Murphy and Brad Falchuk know better than that. Here's who would make a big impact without pulling one of the main characters out of rotation before their story has a chance to percolate:

Think about it. This would hurt in a big way because it would hurt the freak family and it would especially hurt poor Pepper. What's more, is that since we know this Pepper is the same Pepper from AHS: Asylum, it would stand to reason that losing her best bud helped put her in a mad enough state to find herself at Briarcliff 14 years later, no?

While I would hate to see Jyoti Amge go so soon, having Elsa lose her veritable favorite "freak" would certainly help to unravel the egotistical nightmare that is Elsa Mars. Plus, it would unleash a wave of guilt, since her need to perform is what brought Edward Mordrake and his Halloween murder plot out to play.

While it would certainly be insane to kill one of them off already, the show does seem to be pushing the separation/death storyline pretty heavily. We've already seen two hints in just three episodes (Dot's dream this week and Elsa's slip of a potential murder weapon last week). Plus, while Sarah Paulson isn't going anywhere any time soon, that doesn't mean she can't lose one of her heads.

Of course, knowing AHS, absolutely anyone (who has not been spotted on set recently) could kick the bucket next week. Maybe stock up on tissues and something to quell your rage, because whatever happens, you're going to have some feelings about it.