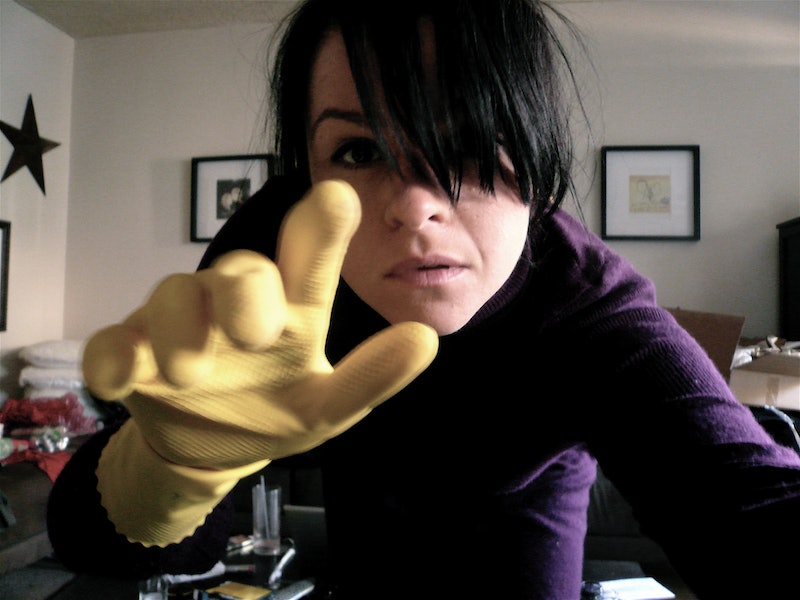 There I was, sitting in the bathroom, with blood running down my hand. I had been feeling my cervix — like I do every day — when I noticed a small lump. As I investigated this strange new growth, it started to bleed. I was still weeks away from my next period, so, naturally, I started to panic. Could I have cervical cancer?

The idea of getting up close and personal with one’s cervix is foreign to a lot of women, and it isn’t something that was immediately appealing to me. I began the unconventional practice almost two years ago when I made the decision to give up the pill for natural birth control. Yes, I said it: I use natural birth control.

People tend to make a lot of assumptions when they find out I don’t use the pill or another, more “modern” method: I must be an irresponsible, rhythm-method-using, anti-science, period-loving hippie. I can’t say that I blame anyone for thinking this, because that’s exactly the image that popped into my head when I first heard about the method.

how many women out there could potentially benefit from performing the simple cervical self-exams that I do on a daily basis as part of my birth control method? After all, they can help in the detection of issues like vaginal infections, pelvic inflammatory disease, hormone imbalance, infertility, and, in my case, cervical polyps.

But I’m not any of those things. I’m one of the most responsible people I know (for better or worse), I’m a total science nerd, the thought of using the rhythm method makes me cringe, and I have a love–hate relationship with my period just as much as the next gal (like, maybe I want kids at some point, but it feels like my uterus just went on a stabbing spree inside my body).

In the two years before I decided to quit the pill, I was dealing with nasty side effects that just wouldn’t let up, and I wanted to make the switch to something natural. As a science nerd with obsessive tendencies, I suspected that finding another birth control method that was up to snuff would be no small task.

It took weeks of disappointing research, a defeating trip to my gynecologist, and a diaphragm prescription that I had no intention of filling for me to find a natural method that finally piqued my interest. It’s called the sympto-thermal method (which you may hear referred to as FAM, for fertility awareness method), and it’s so gloriously rooted in science that I immediately knew it was the one.

Instead of popping a little pill every day, I started taking my temperature when I woke up, touching my cervix at least once a day, examining the fluid produced by my cervix, and following a simple set of rules. All of these things might seem completely weird, but they help me figure out when I’m fertile.

See, for most of the menstrual cycle, the vagina is actually a totally awesome sperm-killing machine. It’s only when the cervix produces a special type of fluid that sperm can survive long enough to fertilize an egg. Touching my cervix and checking my cervical fluid tells me when my vagina is in sperm-killing ninja mode, and taking my temperature tells me when I’ve ovulated and won’t be at risk of pregnancy again until my next cycle. Science (and vaginas), for the win.

I ended up spending the next year (a freaking year, you guys) obsessively learning about the science behind the method — and then starting a women's health company called Groove and writing a natural birth control book — all because I was so fascinated by all of the stuff I was never taught about my body.

People are usually pretty surprised when I reveal the truth about this intimate part of my life. But I didn’t switch to natural birth control because I just love the way my cervix feels or because I'm into "contraception voodoo," as a recent article by the Guardian suggests. I use this method because I like knowing what’s going on in my body. I like knowing that there are certain parts of my cycle when it’s highly unlikely I will get pregnant, and I like knowing exactly when those times are.

I like that practicing the sympto-thermal method is as effective as the pill and that I don't have to deal with the horribly long list of side effects I used to endure. And when I recently found myself sitting in the bathroom wondering if I might have cervical cancer? Well, I also like that my birth control helps me figure out that I have an abnormal, blood-spewing growth on my cervix.

When I found the bump, I think it’s an understatement to say that I was a little concerned. I was totally sure that I probably (maybe?) had cancer and was going to die. By that point, I had touched my cervix enough times to know what was normal for my body, and a bloody lump definitely wasn’t it. But being the science-obsessed gal that I am, I decided to do a little digging around to try and make sense of my discovery. After a little research, and a little more cervical spelunking, I was certain that I had finally cracked the case. And it wasn’t cervical cancer, thank God.

Random bleeding, an elongated bump, heavier-than-normal periods: I believed I had a cervical polyp. Although relatively rare for women my age, a vast majority of cervical polyps — or small tumors on the cervix — are benign and cause no immediate or long-term harm. They can, however, be a sign of a hormone imbalance — an issue I’d already been suspecting in recent months for other reasons.

Relieved by my discovery, I made an appointment with my doctor to confirm my suspicion and have the polyp removed. I was still more than six months out from my annual pelvic exam, so, needless to say, I was also feeling pretty darn proud of myself. And to think, it was all thanks to my irresponsible, anti-science, hippie birth control.

Still, cervix-touching isn’t exactly mainstream, and it's normal if you find the notion of touching your cervix totally ridiculous or potentially unsafe.

In order to get some professional advice (as you always should before embarking on any birth control method) I spoke with Dr. Joshua M. Hurwitz, a board-certified physician of Obstetrics and Gynecology (OB/GYN) and Reproductive Endocrinology and Infertility (REI) at Reproductive Medicine Associates of Connecticut (RMACT). He offered some advice on checking the cervix.

"Wash your hands before and after," Dr. Hurwitz says. "You obviously don’t want to use any sort of foreign objects that may or may not be sharp to stick into the vagina or into the cervix, because you don’t want to do anything to cause harm or abrade the tissue inside."

The sympto-thermal method (and natural birth control, in general) definitely isn’t a fit for every woman, and I would never claim it is. But my experience makes me wonder: how many women out there could potentially benefit from performing the simple cervical self-exams that I do on a daily basis as part of my birth control method? After all, they can help in the detection of issues like vaginal infections, pelvic inflammatory disease, hormone imbalance, infertility, and, in my case, cervical polyps. It doesn’t always take the latest-and-greatest technology to discover a potential problem.

“There’s a lot that can be gleaned from these old-fashioned methods. I won’t even call them old-fashioned, because they’re still germane and important for our lives today — so I don’t really think of them as old-fashioned,” says Dr. Hurwitz.

Dr. Hurwitz advocates that “every woman should have knowledge-based fertility awareness to empower knowledge and comfort with her own body,” and in my opinion, every doctor should, too.

Most doctors and health organizations already advocate for breast self-exams, so doesn’t it make good sense that this knowledge-based awareness also include self-exams of the cervix and cervical fluid as an important part of prevention and detection of reproductive issues?

I’m living proof that these strange practices are more than just a hippie stereotype. So even if you have absolutely no interest in using natural birth control, and even if you’re not ready to reject the stereotypes that plague natural methods, I challenge you to take a more active role in your reproductive health.

I challenge you — with clean hands and with no sharp objects in sight — to touch your cervix.

More like this
An Honest Review Of The TikTok-Famous WalkingPad
By Kaitlyn Wylde
5 Crystals To Lower Your Anxiety
By Megan McCarty
5 Crystals To Manifest Better Sleep
By Megan McCarty
The Viral TikTok “30,000” Sound Fits Nearly Every Scenario
By Courtney Young
Get Even More From Bustle — Sign Up For The Newsletter