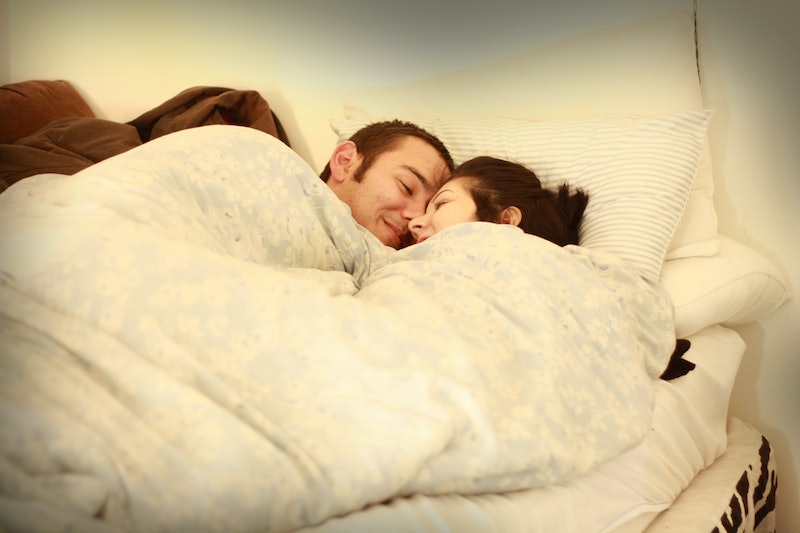 I was raised in the '90s, during the first great wave of public breast cancer awareness campaigns. Though I'm amazingly lucky that no one close to me has ever developed the disease, it's always been on my radar. My childhood memories are dotted with breast cancer education and outreach efforts — charity walk-a-thons festooned with pink streamers, brochures advising how to administer self-exams, and of course, those pink foil lids on your yogurt that you were supposed to do something or other with.

One day, in a middle school health class, we seventh grade girls were even given palm-sized, clear rubber boobs, with a tiny tumor embedded in the back, to make us more comfortable with breast self-exams when the day came.

Though I can't tell you what happened to that rubber breast (I think I might have thrown it at someone's head on the school bus later that day), I can tell you that, despite my own best efforts, time as moved forward — and the time to actually pay attention to my breast health has finally arrived.

my boyfriend joined me in the bedroom to examine my boobs. "You're too tired to have sex, right?" he asked, eagerly hefting my breasts in his palms like he was checking cantaloupes for ripeness. "Yes, and also that's not how you do it," I said, grabbing his hands. "You do it like this."

And in those intervening decades, despite the best efforts of doctors and public health campaigners alike, I did forget to get comfortable with checking my breasts for irregularities. I'm the most worthless kind of hypochondriac — the kind who thinks she's somehow contracted Ebola at Starbucks, but then puts off actually seeing the doctor — and the idea of regularly checking my breasts for lumps hit me in my greatest blind spot.

While breast self-exams have been the source of considerable medical controversy in recent years — multiple studies have found their role in early breast cancer detection inconclusive, the U.S. Preventative Services Task Force recommended against the practice of breast self-exams, while a recent Canadian study found that correctly conducted self-exams play a crucial role in catching developing breast cancers — everyone seems to agree that becoming as familiar as possible with your breasts and how they feel is a plus when it comes to early detection of breast cancer.

And though I do get a clinical breast exam once a year, my gynecologist does it for just a few moments, as almost an after-thought after my pap smear. I trust her judgment, but I also know that she's most likely looking for very noticeable lumps and bumps; she wouldn't know if a certain area of my breast felt lumpier or denser than usual. When it came to consistently examining my breasts, the ball was in my court — a challenge that I found absolutely terrifying.

And yet totally necessary. My questionable credit rating and occasional compulsion to shop at Nasty Gal have allowed me to keep believing that I'm still about 23 years old most days; but in reality, I'm actually 32, and breast cancer isn't some far-away thing that I can figure out how to think about later.

I also started getting my period before age 12 and have never been pregnant — two other breast cancer risk factors — so, though no one in my family has ever had it, that doesn't actually mean that I'm as safe from breast cancer as I had always assumed. In fact, lack of family history is not the protection I had believed it to be: only 5-10 percent of breast cancers are hereditary, a number than honestly shocked me. Taking this all in, I was caught frozen between brushing off a serious concern and unnecessary panicking.

So, like I do whenever I confront something I'd rather not deal with in my life (family troubles, work problems, a Con Ed bill that I forgot to pay for six months), I decided to look to my boyfriend for support. Many medical professionals advocate getting partners involved in breast health routines — often, breast lumps are first noticed by partners, and partner exams for breasts, moles, and testicles are touted by a number of experts as part of an effective self-exam regimen.

After all, my boyfriend is in his late twenties, smack in the middle of the highest-risk age group for developing testicular cancer, so I've been casually checking his balls for anything irregular for years. And let's be real — he's certainly the world's #1 expert in everything and anything having to do with my breasts. So why not get him involved? Not only would he currently be the best judge if anything was off with them, but having him there would take the edge off for me.

And so, in order to confront my fear of self-exams this Breast Cancer Awareness Month, I asked my boyfriend to literally play doctor with me. "Will you rub my boobs before we go to bed?" I asked one night in the bathroom. "Yes, but let me finish q-tipping my ears first, okay?" was his response. And so, I learned my most important lesson for partnered breast exams: let your partner take the q-tip out of their ear before asking them to fondle you for health-related reasons. That's probably the first thing they teach you in medical school, I thought to myself.Cotton swab discarded, my boyfriend joined me in the bedroom to examine my boobs. "You're too tired to have sex, right?" he asked, eagerly hefting my breasts in his palms like he was checking cantaloupes for ripeness. "Yes, and also that's not how you do it," I said, grabbing his hands. "You do it like this."

I then moved his hand in circles around my breast —those same slow circles that I learned so many years ago in health class with that rubber boob. I told him what to feel for — sharp lumps and other irregularities. "Okay," I said, linking my hands behind my head like I was about to do some mid-air stomach crunches, "now you do it by yourself." We were both giggling pretty hard at this point; I was quite positive that what was going on now would not pass anyone's muster as a serious act of preventative health care. But he was checking. And it wasn't so scary.

"You should have just asked me to rub your breasts like this while we were having sex," he said. "Yeah," I said, "but what if you found something?" Just hearing the words come out of my mouth made me nervous. I was glad that my boyfriend was there, cupping my breasts, but this was the first time in my life that I'd ever even acknowledged out-loud that breast cancer was a thing that could happen to me. It was, even with all that giggling, surprisingly intimate.Lifting up his hand, my boyfriend announced, in a Barry White voice, "Girl, you don't have any lumps." I burst out laughing. Then, in his regular voice, he said, "So, are you sure you're too tired to have sex?"

If we had found anything unusual, I'm sure the partner exam would have ended a little differently (spoiler alert: it ended with us making out), but having someone else there made the idea of dealing with something bad a little easier to think about. I wouldn't have to face that first second of terror on my own. While I'm going to try to start doing exams on my own, getting my boyfriend involved also reminded me that someone else is counting on me to take decent care of myself.

Partner breast exams are no substitute for self-exams, of course, and self-exams are no substitute for actual exams conducted by a medical professional. But if the health of your breasts depends on being as familiar as possible with how they normally look and feel, why not get as many people on your team as possible? Because sometimes, when it comes to boobs, it takes a village.

More like this
What Is The Forest Personality Test? The TikTok Trend, Explained
By Georgina Lawton
Why Experts Say Sleeping With A Fan On Isn’t Totally Risk-Free
By Sophie McEvoy
The Best Time To Date After A Breakup, According To Experts
By Bustle Editors
Young People Are Still Experiencing Period Poverty In UK Schools
By Sophie McEvoy
Get Even More From Bustle — Sign Up For The Newsletter