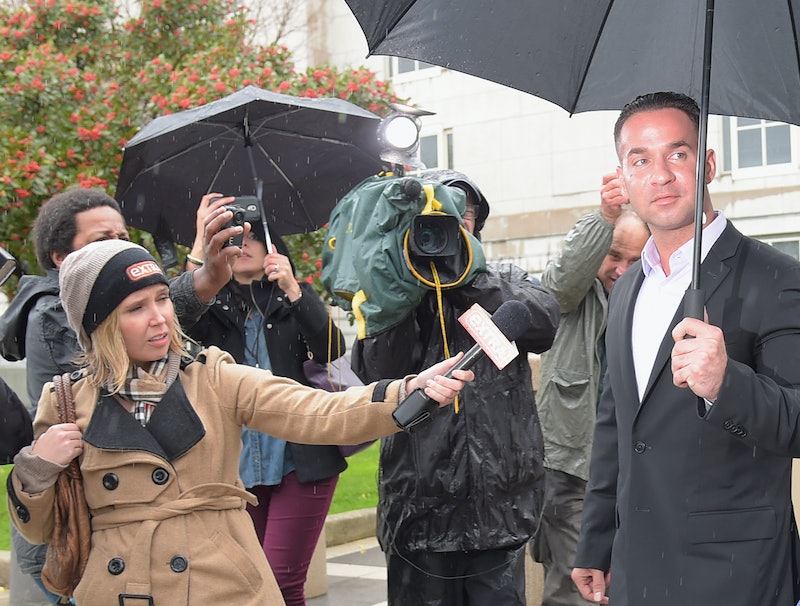 "The Situation" is trying to handle his situation. On Thursday, Oct. 23, Mike "The Situation" Sorrentino pleaded not guilty, alongside his brother Marc, to conspiracy to commit tax fraud. Thursday's arraignment was originally set for Oct. 6, but was postponed due to Mike's prior obligations aka he had to film another reality show, Marriage Boot Camp, with his fiancée. That last part isn't a joke. Moving on, the trial is now set for Dec. 2, where Mike and Marc will face several tax fraud charges — seven counts to be exact — on avoiding to pay taxes on nearly $9 million in income.

So, here are the charges: The Sorrentinos have been charged with one count of conspiracy to defraud the United States. Mike himself is facing two counts of filing false tax returns for 2010-2012 with Marc is facing three of the same charges. And, in addition, Mike is being accused of not filing a 2011 tax return, a year in which authorities reported he made almost $2 million.

With that said, it means both of the Sorrentinos are facing a maximum of five years in prison, if convicted.

According to the indictment, Michael and Marc Sorrentino filed false tax returns that incorrectly reported millions made from promotions and appearances. The brothers allegedly also claimed costly clothes and cars as business expenses and funneled company money into personal accounts. The law is absolutely clear: Telling the truth to the IRS is not optional.

Well, this definitely isn't going to be a simple and short road ahead for the brothers. Not only do they have to wait until December for their trial, but if found guilty, they will face their punishment in prison. About a month ago when this all came to light, Mike was trying to stay positive, so I wonder how he's feeling today? During his Jersey Shore days, I bet Mike never thought he find himself in this situation.