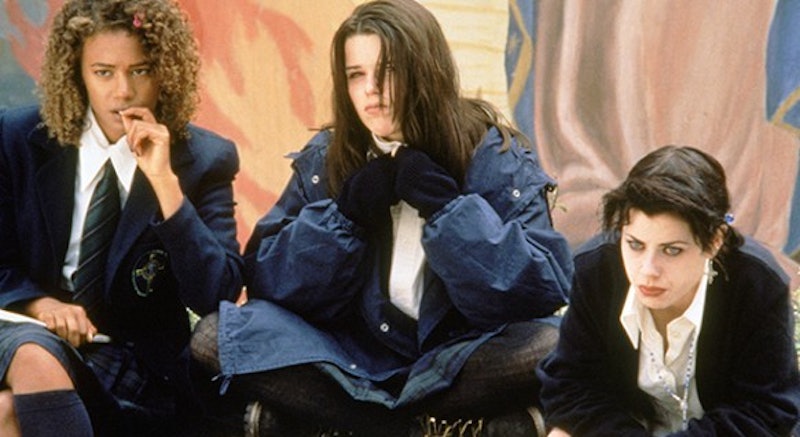 I did not have a fantastic high school experience. Kids are cruel: they thought I was a witch, and it's something I've chosen to never get over. But when the going gets tough, I turn to Netflix, and while I'm there, I like to keep company with all the other freaks of film. To a girl who got told "It's not Halloween YET" everyone September through October, it's comforting to know that even when cursed with enormous supernatural abilities, 11th grade is like, SUCH a drag.

I'm sure some of you can can identify, and even a handful of you may even be experiencing the hell of Algebra 2 right now (because teenagers, I hear, use the internet, too). Between boys, zits, and getting possessed by Satan AND snagging tickets for Miley Cyrus, there's a lot of everyday stresses would be made so much easier by some cinematic solidarity. that In recognition of that, I've assembled a small collection of horror (with a dabble of comedy) films that showcase that all girls, whether they're vampires, werewolves, telepaths, and yes, even witches, have a difficult time with the dramas of high school.

If you haven't seen it, you've at least read about 50 Nylon Magazine articles about it already. That said, it's a worthwhile cult hit that has four misfits tinkering with dark forces to fix their everyday issues. Therapy maybe would've been a healthy alternative, but what can you do. Sarah, Bonnie, and Rochelle undergo a lot of shit throughout the movie, but Nancy deeeeefinitely has the most baggage out of the group.

This is actually a trilogy, and while I can't vouch for the other two movies, the first one is really worth a watch. Sisters Ginger and Brigitte face a rift when Ginger gets turned into a werewolf. You know, it's an extended puberty metaphor. At one point Ginger, regurgitating blood, tells her sister, "I get this ache, and I thought it was for sex, but it's to tear everything to fucking pieces." I should've made that my senior quote.

I need to go on the record as saying this is NOT a great movie. Considering this was Diablo Cody's follow-up to Juno, named after a Hole song, no less, I had way bigger expectations. To be fair, this was the point in Megan Fox's career when she was so hot she occasionally forgot to act.

Still worth watching once, though. Basically, all hell breaks loose when cheerleader Jennifer turns into a succcubus after a botched sacrifice when she's mistaken for a virgin (although, SERIOUSLY? She's like the Sloriest Slore in Sloretown). She then starts eating boys, so at least there's that.

Not a monster, but chosen to be equipped with the strength to fight against monsters, which is really stressful when it correlates with the big school dance. Definitely a campy treat for fans of the series, which is basically a rich several-season story about how difficult it is to be a female. You know what the series lacks, tho? Pee-Wee Herman as the undead.

The movie has a morbid fascination with suicide, but if lesbian vampires are your thing, then here you go. Definitely tackles some teenage struggles, especially concerning being in a dominating relationship. Weirdly leaves out how awful your life would be if your parents named you "Ernessa."

Such a classic, and really valid because nobody has a worse time at school than Carrie White. No wonder she sets it on fire (oh no, spoiler alert for a movie over 30-years-old!). This film is also great at showcasing the nightmare of unexpectedly getting your period on campus.

Because while getting your period at school is bad, having a fanged vagina is worse.