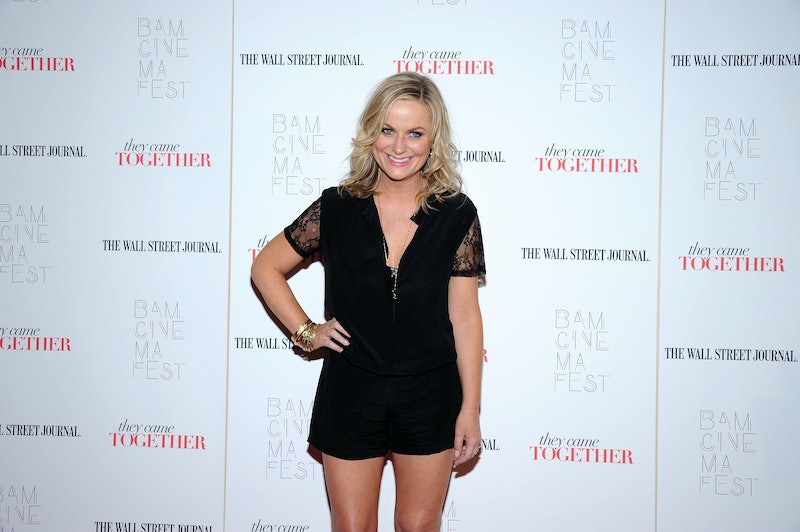 You’d have to be a humorless misanthrope with a heart of stone to dislike Amy Poehler. She’s hilarious, relatable, talented as hell, and, with her BFF Tina Fey, half of one of the funniest comedy duos around. Her Hillary Clinton impression is now part of the Comedy Hall of Fame — if such a thing existed. She co-created Smart Girls at the Party. Her all-time favorite show is Law & Order. In her new book Yes Please, she thanks Dolly Parton in the Acknowledgments, “Just because.” I'm not going to say any more, because I don't have to.

In Tina Fey’s book Bossypants, the actress told a now oft-repeated Saturday Night Live behind-the-scenes story about Poehler telling a joke that was “dirty and loud and ‘unladylike,’” which caused Jimmy Fallon to say, “Stop that! It’s not cute! I don’t like it.” Did petite, blond SNL newbie Poehler say, “Oh sorry, I’ll stop”? Hell no. She said, “I don't fucking care if you like it.” And then she kept on talking.

Reading Yes Please gives you a glimpse of this side of Poehler — the feisty, scrappy, Massachusetts born-and-bred hell raiser who worked her way from an elementary school production of The Wizard of Oz to Second City, the Upright Citizen’s Brigade, SNL, Parks and Recreation, the Golden Globes (as winner and host), and now, author of one of the heaviest 329-page books ever written. (For real — Yes Please is so heavy it feels like the pages are made of granite. But don’t let that stop you from reading it.)

What the book proves is that Poehler isn’t relatable and awesome because she’s adorable and funny and agreeable, but because she’s a total badass. And here are a few moments from the book that prove it:

She knows when to say “sorry” — and when to stop apologizing

There’s a section in Yes Please called “Figure out what you want. Say it loud. Then Shut Up.” In it, Poehler writes about giving birth, being born, losing her temper, screaming at people, and learning when — and when not to — apologize. “It takes years as a woman to unlearn what you have been taught to be sorry for,” she writes. “It takes years to find your voice and seize your real estate.” See: Badass.

There’s a lot of namedropping going on in Poehler’s book. And why wouldn’t she namedrop? The woman has met presidents, Oscar winners, and Beastie Boys. She’s friends with Kathleen Hanna. She’s hugged Justin Timberlake, sat on George Clooney’s lap, and, backstage at SNL, she’s seen Robert De Niro, a master actor who is revered across the world, “wiggle into spandex pants as Siegfried. Or Roy.” It’s not that Poehler is cool because she can text Tina Fey or have a beer with Hillary Clinton, it’s because she’s not pretending that it’s not badass to know all these people. There’s no need to humblebrag about it. It is badass.

You know those people that are like, “Oh you have to breastfeed your child or they’ll grow up to be criminals who suffer from seasonal allergies” or “If you wear white after Labor Day your life will be one miserable march into the abyss”? Well, Poehler shares a motto in Yes Please that’s ideal to use in these situations: “Good for you, not for me.” You want to (and can) breastfeed? Great, I’ll do my own thing. You follow antiquated fashion rules? Cool, it’s December and I’m going to slip into some snow-white ankle boots now, thank you very much. #Badass.

If you’re having a bad trip, you might want Amy Poehler around to help talk you down from the tree branch you’re clinging to or coax you away from the pool of molten lava you think you’re about to jump into even though it only exists inside your mind. She’s apparently very good at this. She also has solid advice about teens and hardcore drugs: “Teenage bodies should be filled with Vonnegut and meatball subs, not opiates that create glassy-eyed party monsters.”

She’s not as nice as you think she is

One of my favorite lines in Yes Please is “See? I am not as nice as you think I am.” It won’t win her the Pulitzer or get recited by presidents (actually, it might — she does know a lot of important people). The confession comes after Poehler has just written about her annoyance with people who shove their movie or TV scripts in her face as she’s riding the subway or walking down the street. “Good or bad, the reality is most people become ‘famous’ after a very, very long tenure shoveling shit and not because they handed their script to someone on the street.” In other words, she’s not into laziness. In fact, the very first line of her book is, “I like hard work and I don’t like pretending things are perfect.” Amen.

Towards the end of the book Poehler writes, “Let me take a minute to say that I love bossy women. Some people hate the word, and I understand how ‘bossy’ can seem like a shitty way to describe a woman with a determined point of view, but for me, a bossy woman is someone to search out and celebrate.”

That, my friends, is badass.

More like this
30 Books To Read This AAPI Heritage Month
By K.W. Colyard
Selma Blair Wrote Through The Pain
By Samantha Leach
Watch The Emotional Trailer For Dolly Alderton’s 'Everything I Know About Love'
By Bustle UK
At 28, Minnie Driver’s Personal Life Was “Falling Apart”
By Kate Dwyer
Get Even More From Bustle — Sign Up For The Newsletter