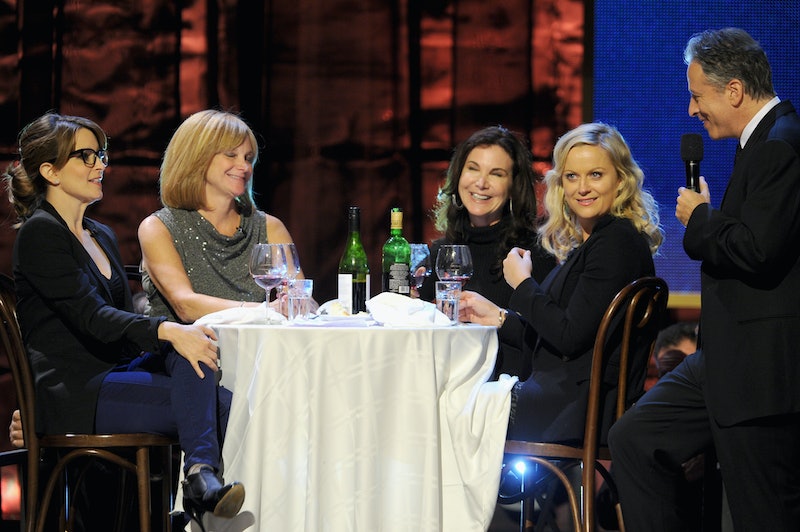 A few years ago I stumbled upon Awesome People Hanging Out Together, a Tumblr devoted to photographs of interesting and often surprising combinations of famous and influential people socializing or working together. I easily got sucked into the website, and as I scrolled through photo after photo, I couldn't help but wonder about the backstories to these weird and wonderful groupings of people.

I kept thinking back to this website as I read Amy Poehler's new book Yes Please, because Awesome People Hanging Out Together would have been a good alternative title. Considering Poehler's success in improv, television and film, including her seven years on Saturday Night Live, which welcomes a new guest every week, she has a whole arsenal of behind-the-scenes stories involving actors, comedians, musicians, politicians and more that she freely taps into in the book.

Rather than feeling like an attempt to re-enforce her celeb status, Poehler's namedropping comes across as just another way that she is opening up the doors to her life and inviting readers in. Sure, she may rub elbows with Barack Obama and Bono, but like those pictures of awesome people hanging out together, there's usually an interesting story to go along with it, and in Yes Please, Poehler shares some of her best.

During her tenure on SNL, Poehler was the go-to girl for impersonations of the former First Lady, Senator, Secretary of State and presidential candidate. Luckily, Clinton had a sense of humor about it, appearing with Poehler in a 2008 sketch. While Poehler herself says she doesn't think she ever got her Clinton impersonation exactly right, she must have been pretty close. When Poehler's son Archie was born in 2008, Clinton sent a personalized note to the baby commemorating his birth, signed "your mother's double."

She and Seth Meyers go way, way back

The host of Late Night with Seth Meyers pops up regularly in Yes Please, even penning a chapter of the book, but perhaps his most interesting appearance is the one in which he and Poehler didn't know who the other was. Turns out, Meyers and Poehler met in Chicago in the 1990s when Meyers attended one of Poehler's shows at the ImprovOlympic, and volunteered to be part of an improv game. "My first conversation with Amy was in front of an audience: me in a chair, her standing beside me," Meyers writes. "She was charming, funny, sweet and sharp, and I left thinking, 'I would like to be her friend.'" Of course, Meyers got his wish and then some when he joined the cast of SNL, and eventually replaced Tina Fey as Poehler's "Weekend Update" co-anchor.

Jon Hamm made her laugh 'til she peed

Don Draper has a way with women in real life, too, it seems. Hamm was the host of Saturday Night Live the week Poehler gave birth to son Archie, and was in rehearsal with her when she found out her OB/GYN had died suddenly of a heart attack. When Poehler panicked, Hamm came to the rescue, putting an arm around her and saying, "I know this is very sad, but this is a really important show for me, so I'm going to need you to get your shit together." Writes Poehler, "This made me laugh so hard I think I peed."

Everyone, including Poehler, knows that Betty White is a national treasure deserving of love and praise. When White appeared on a Mother's Day episode of Saturday Night Live, Poehler asked the comedy legend what she did when she went home at night. White's reply? Fix herself a vodka on the rocks and a cold hot dog. Who would have thought that was the secret to a long, successful life?

Nick Kroll is much nicer than the characters he plays

Since 2013, Poehler has been romantically linked to the star of The League and Kroll Show. While the thought of Pawnee's sweetheart Leslie Knope dating Rodney Ruxin is a little disturbing, this cute story makes up for it: "On one of our first nights together I woke up apologizing for my snoring and he pulled out the two earplugs he had worn to bed so that he could hear what I was saying. It was one of the most romantic gestures I have ever seen."

She and Carol Burnett are besties (sort of)

Even for people who are famous in their own right, meeting one of your idols can be a big deal. Poehler writes of how lucky she was to be interviewed for a TV Guide piece with one of her comedic inspirations, Carol Burnett. The best part, she writes, was having Burnett tell her, "You're my new best friend!" How's that for a fangirl moment?

Poehler loves doing small comedic routines known as bits, particularly at awards shows. In Yes Please, she chronicles some of these bits, such as the one she helped orchestrate at the 2011 Emmys. But perhaps the best one of all was the 2013 Golden Globes, when she lived out the fantasy of millions of heterosexual women, and got to canoodle with George Clooney. In an even ballsier move, she didn't tell Clooney beforehand what she was going to do, writing, "Don't ask for permission to sit on George Clooney's lap, beg for forgiveness once you do." The consummate professional, Clooney played along, even encouraging Poehler to kiss him if she won. So what was he whispering that made her giggle so hard? You'll have to read the book to find out...

More like this
Jennette McCurdy’s First Kiss On 'iCarly' Didn’t Go As Planned
By Bustle Editors
Kanye West Has The Most Kanye Reaction To Kim Kardashian & Pete Davidson's Split
By Jake Viswanath
We’ve All Had Bad Sex. Nona Willis Aronowitz Is Talking About It.
By Sophia Benoit
10 Must-Read New Books Out This Week
By K.W. Colyard
Get Even More From Bustle — Sign Up For The Newsletter