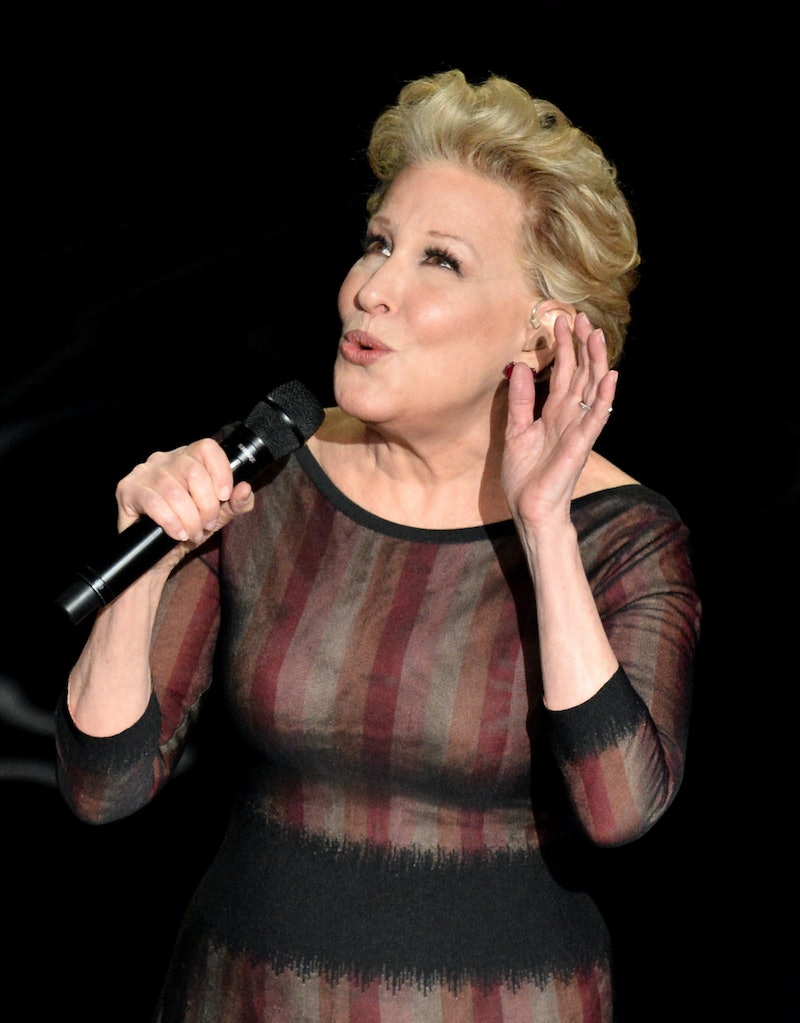 Just in case you ever had any doubt that The Divine Miss M could sing absolutely anything, then her latest musical endeavor will finally be able to put your mind at ease. Included as part of her new album, It's The Girls, Bette Midler sings TLC's "Waterfalls" and obviously it's nothing short of spectacular. The legendary artist slows the rhythm way, way down, which helps to really capture the elaborate sadness of the story this song entails. However, Midler unfortunately opts to completely skip over Left Eye's iconic rap sequence, which is not all that surprising, but still a little disappointing. (You just know she would've totally nailed it had she given it a try.)

And while TLC may seem like an unlikely choice for this iconic artist, the album actually features her singing tunes from a wide variety of different, yet talented, girl groups, ranging from TLC to the Boswells to the Andrews Sisters, and many, many more. But since the album won't be dropping until Nov. 4, I thought I'd take this time to compile a wish list of songs Midler should cover — if not in this album, then in one sometime in the future. With vocals like hers, something tells me Midler would be able to turn any song out there into a gold record.

Need proof? Just have a listen to her take on "Waterfalls" and see for yourself:

And with that in mind, here's what I'd love for her to take on next:

This may be hard for you to imagine, but "Waterfalls" wasn't exactly something we thought she'd do either, and yet here we are. There's no telling what she could do with this song about friendship. Those "zigazig ah's" won't know what hit them.

Talk about girl empowerment, this song has got it in spades, which would only be further enhanced with Midler's iconic singing chops. Prepare yourselves.

"Jump (For My Love)" — The Pointer Sisters

It's fun. It's a classic. And if it comes with a dancing Hugh Grant, then so be it!

Let's be honest, Midler is capable of singing the hell out of this song. (Or any song, for that matter.) Plus, she's had great success singing about the five great elements of the world before ("Wind Beneath My Wings, now "Waterfalls," etc.), so odds are talking about flames and fire would prove to have similar results.

Not to sound like a broken record or anything, but Midler would totally rock this song, no matter what rhythmic direction she took it in. What can I say? The woman is simply flawless.

Then again, I'd be just as happy to see her tackle yet another TLC song. After all, why mess with a good thing, right?

Then, Of Course, There's Always This…

Another version of this song floating around out there makes the mind run amok, amok, amok!