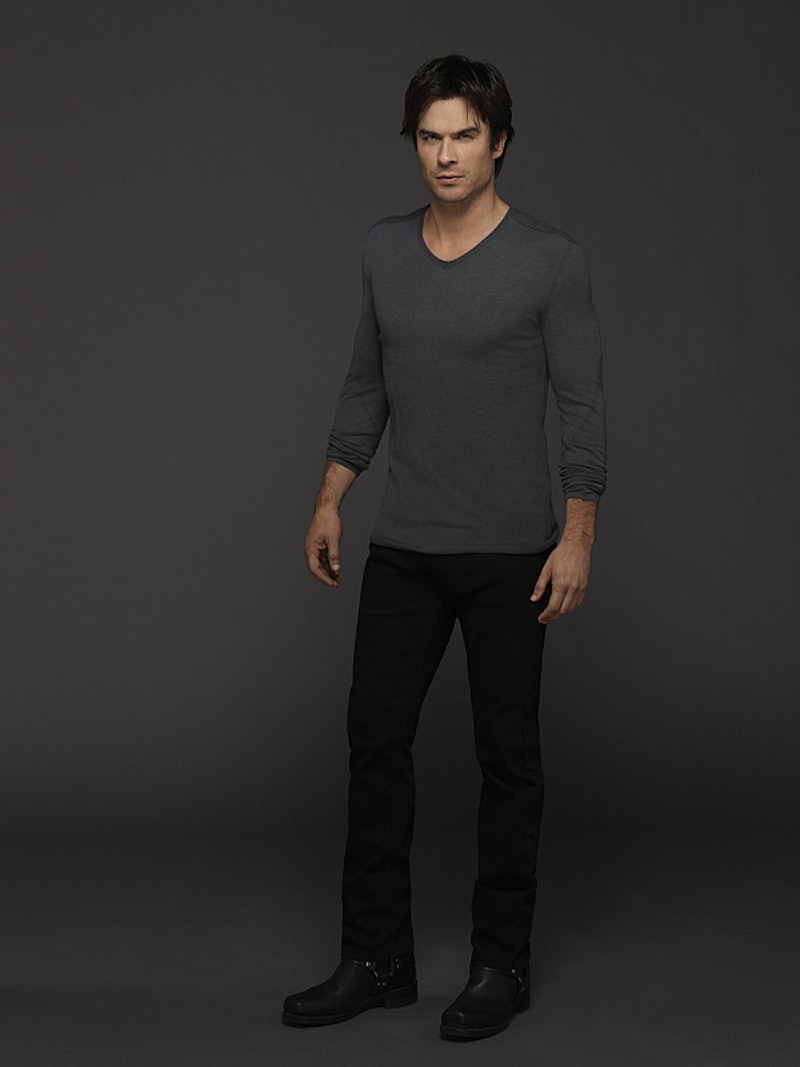 It is definitely no secret that The Vampire Diaries ' Ian Somerhalder is one very gorgeous specimen of a man. Seriously, though, how can one person be that attractive? It almost makes me believe that he's actually supernatural like his TVD counterpart Damon Salvatore, who is arguably just as handsome, if not more. (What? I kinda got a thing for bad boys. But that's a Freudian talk for another day.) I guess what I'm trying to say here is that I don't mind looking at this guy's face up on my television screen every Thursday night. Nope. Not one bit.

But like anything, Somerhalder's character, Damon, has various degrees of sexiness on the show. And while asking me to pick which facial expression is hotter than another seems almost equivalent to asking a parent to pick their favorite child, I'm willing to give it a go. For the sake of TVD fans everywhere. (Or this is just my excuse to stare at various images of Damon for the rest of my evening.) Either way, let's chock it up as being a huge sacrifice on my part.

So without further adieu, here are the many different levels of the Smolderholder's facial expressions, ranked from fangs-out scary to full-on smoldering. Brace yourselves, ladies.

Not exactly his best look ever, though, to be honest I'm still not totally un-attracted to him right now. (I know, I'll call my therapist first thing in the morning.)

He may look just as hot as ever here, but anything that involves Damon acting annoyed with me (or anyone he's talking to) is never a good thing. Unless he's waving me over and not away, I don't want anything to do with it.

Though I can't deny that he's still very attractive, I'm not really digging the whole deadpan stare he has going on here. Still swoon-worthy, of course, but just a little too intense for my taste.

My favorite kind of Damon is one who actually cares about something (or someone) and isn't afraid to show it. So this whole indifference thing is definitely something I could do without. (Though if this is the only facial expression offered to me, I'll take it.)

Even with a furrowed brow, this guy is so intensely serious that it's somehow still downright sexy. Who wouldn't want to be caught in that gaze?

He still may not look very happy, but this level of intensity feels more like a combination between cocky and passionate, which, to me, is very, very appealing. Plus, the shoulder roll really helps with the overall effect.

Still arrogant, but in a joking/flirting kind of way. And it's not as if what he's saying is inaccurate or anything.

It doesn't matter that he's killed thousands of people without a shred of remorse. As soon as he gets that pained look of concern on his face, I immediately become blind to all of his sins. I mean, what's murder in the face of pure perfection, right? (Logic was never my strong suit BTW.)

Damon saved Elena from embarrassment at the Founder's Day Gala, and proved that he could be just as much of a gentleman as his brother. Notice how they're solely focused on each other? As if no one else in the world exists. #TeamDelena4eves

For all the times he wanted to voice his concern or show just how much he cared. You can't help but fall for this tortured vamp.

He can be my vamp in shining armor whenever he'd like.

Watching Damon cry is absolutely gut-wrenching, but it's also guaranteed to make you fall head over heels in love with him. After all, watching a bad boy become so vulnerable is pretty much every girl's Achilles' heel.

When Damon smiles, the whole world smiles with him.

There's that side smirk that we know and love. Which is almost as as good as…

It's the perfect recipe for any successful seduction.

OK, fine, technically being shirtless doesn't qualify as a facial expression, but if you'll notice the look on his face while taking his shirt off, it's easy to understand why it still fits so high up on the list. The pure passion and wanting in his eyes is enough to make any girl melt over and over again.

The short answer: EVERYONE. (He's called the Smolderholder for a reason, people!)