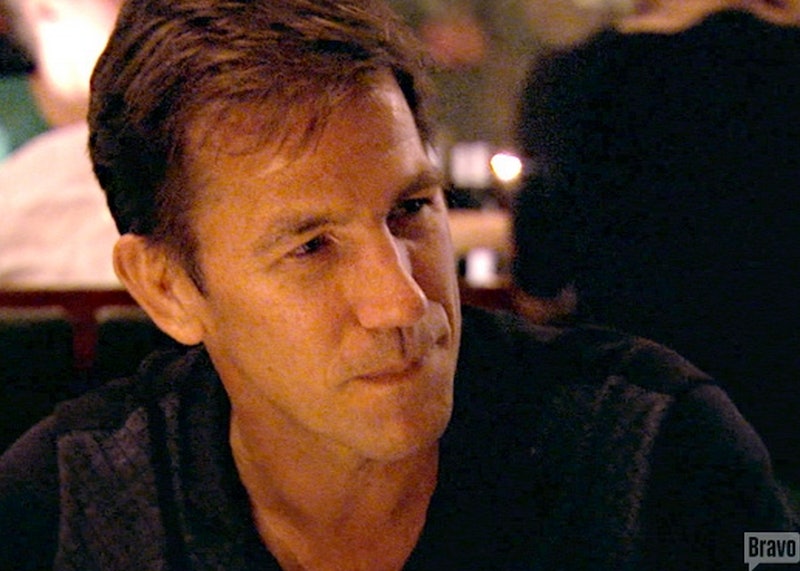 Ever since I found out Southern Charm' s Thomas Ravenel didn't just fire shots at Bravo, but said he's through with the show, I haven't stopped checking the Internet for updates. And Wednesday, I found something: According to the Charleston City Paper, Ravenel says he won't film any more episodes until the election is over. Well, I'll be! It sounds like he may not done with Southern Charm afte— I'm going to stop myself right there. That has to go on the back burner. Because a very big story has surfaced: The S outhern Charm star has been accused of assault. And the details of the police report are pretty disturbing.

Lauren Moser, stylist and friend of Ravenel’s girlfriend Kathryn Dennis, notified the authorities about an alleged incident that went down last Friday at the US Senate candidate’s home. According to Moser, she and Dennis were sitting in the backyard when Ravenel “stormed out of the house” while holding his and Dennis's daughter. Moser says Ravenel “yelled to Kathryn that she needed to take care of the sleeping child," and then he slipped as he walked toward the two women. Still holding the baby, he reportedly fell into the pool.

After Ravenel pulled the baby out of the pool, he handed her to Dennis. Moser says that's when she decided to record what was going on with her cell phone. According to Moser, she'd seen Ravenel get aggressive before and she “felt that more was about to transpire.”

According to the police report, as Moser followed Ravenel into the house, Ravenel swung the door to close it, but instead hit her knee. Moser says that when Ravenel realized the door didn't close, he hit her on the inside of her right arm with the door. Not only did this reportedly bruise her arm, but she says this caused her to "topple backwards down three steps and into some bushes."

Moser says she went to the living room to check on Dennis and the baby, and Ravenel went upstairs. Ravenel reportedly came back to the living room and screamed, "B*tch, get your stuff and get out." Oh, and he was allegedly naked.

Moser has a video recording of the incident, but the CPD does not have a copy.

I learned through a news report that the Charleston Police Department is investigating this incident, and I am totally confident that once the investigation is completed, the truth will come out and any allegations against me will be found to be without merit. I look forward to meeting with any member of law enforcement if they believe it will be helpful to their investigation.

Ravenel has not been charged and multiple local news affiliates report that the investigation is still underway.