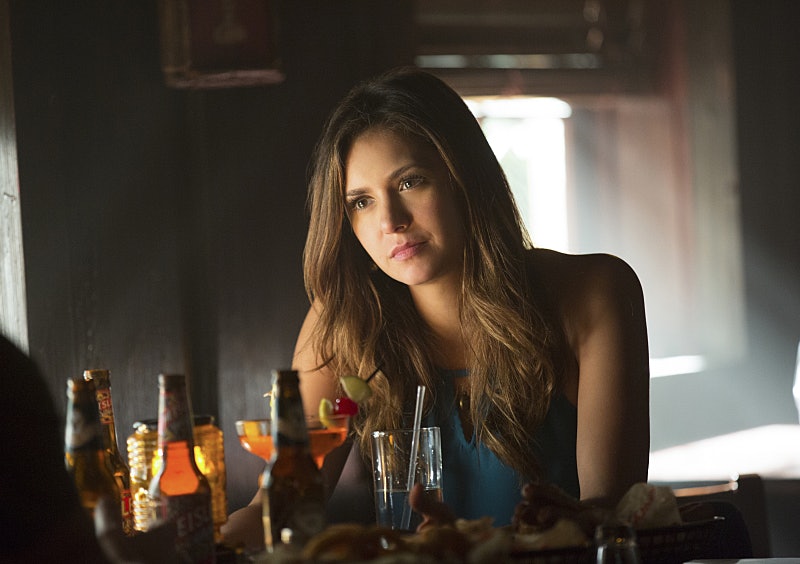 I guess we all cried for nothing, TVD fans. As a diehard Delena fan, a little part of me died when Elena had her memories of Damon erased. Because, deep down, I obviously know that Damon will return to Mystic Falls during The Vampire Diaries Season 6. There's no possible way that he wouldn't, so it hurt me to think that he'd return to the love of his life, only to have her not know him anymore. But, apparently, that's not the case. Thursday night's new episode, "Black Hole Sun," revealed that Alaric can give Elena her memories back on TVD — all she has to do is read the journal entry he wrote her and ask. Yep, it's that easy.

I'm sorry but, WTF VAMPIRE DIARIES?! You put me through all of that emotional trauma of Elena reliving the moment she fell in love with Damon FOR NOTHING? You made me painstakingly try to figure out whether or not Elena could get those memories back FOR NOTHING? God, you are soulless, Julie Plec. SOULLESS, I SAY. OK, I'm breathing again now.

On Thursday night, Stefan finally had enough of Elena's new airhead personality (thank god) and basically told her that she is a weak fraud for running to Alaric and getting compelled. And, I mean, he's right. It hurt me to see Elena standing there asking Stefan how he could be so hurt by Damon's death even though Damon was a miserable monster. (I think I actually told Elena to "shut up" multiple times during her rant.) She pushed Stefan to snap, so he told her off. Because someone really had to do it.

And it was after Elena ran to Alaric and tried to tell him off for wiping her memories that TVD revealed how easy it would be for her to get them back. All she has to do is ask Alaric to give them back and he will. No painful witch magic, no deaths, no nothing — just a good, old-fashioned "please" and her sweet memories of loving Damon will be restored. And just like that TVD killed all of the urgency and heartbreak that it'd built up in Damon's absence and made Elena just look like a pathetic fool that's too weak to grieve.

But that's not even the worst part about this reveal — Elena read Alaric's journal entry and DECIDED TO NOT GET HER MEMORIES BACK. Instead, she asked Alaric to keep the journal in a safe place in case she needed to read the entry again. Because, after all of that — after watching Stefan get beat up because he's so hurt that he can't feel anything anymore — she still felt too weak to feel her pain. I don't think I've ever felt more hurt and deceived by The Vampire Diaries in the five seasons I've been a fan. But I'm sure I'll watch next Thursday anyway. (Damnit.)