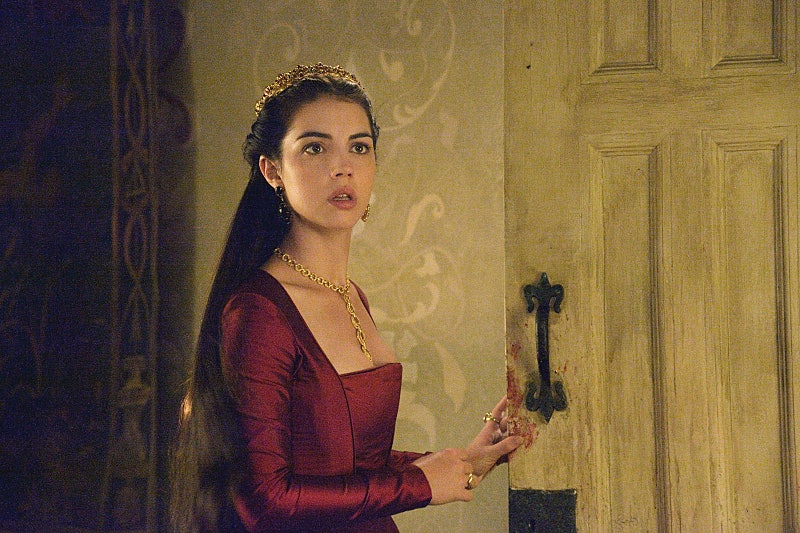 Mary is pregnant. Well, she was anyway. In the most recent bit of Reign baby drama, Mary loses her baby (for modern viewers, it's easy to blame the champagne and wine for playing a part in that), which is understandably devastating. What's not devastating though, is how amazingly feminist (and relevant) this week's episode, "The Lamb and the Slaughter," is. While Mary is focused on her pregnancy (and all of the advice that comes with it, like "Have some sage to ward off evil spirits," and "you're going to lose your figure anyway, so eat up"), Lola has taken up the cause of Estelle, who claiming that her husband, Narcisse, is abusing her. Lola goes to Mary for help in getting Estelle away from court (and Narcisse) and when Mary refuses, things get very real, very fast. Lola lays into Mary, telling her that she's lost her compassion. Mary counters that Lola is being ruled by hers and that it's blinding her to the right thing to do. This segues into an argument about Lola's tryst with Francis (Mary has been holding in all of her anger for so long – it was only a matter of time before that fuse blew) and Lola insisting that it was one night, one mistake. When Mary says Lola needs to take responsibility for her bad choice, Lola snaps and accuses Mary of being out of touch with normal women. As a queen, Lola explains, Mary is privileged enough to have choices. As a queen, she has power that most women could never dream of and that most women feel like prisoners in their own lives.What's amazing about Lola's speech is that it could easily be applied to women today. Replace "queen" with "upper-middle class woman" and Lola's comments become kind of unbelievably relevant to the dreaded and ongoing issue of "having it all." When you have resources (money, time, a support system), it's easy to take the idea of choice for granted. Lola's lack of choice might seem like a symptom of the time she lives in, but the frustrations she expresses aren't so different from the ones millions of modern women deal with every day. Reign took on a very real and often overlooked problem this week, which is kind of amazing for a show that, up until now, was best watched as fashion porn and soapy ridiculousness.

But that's not all! The Reign writers were on a feminist high this week. After the big blowout over power plays and women's choices, Mary and Lola makeup and go into 100% supportive mode. Lola even asks Mary to be the godmother of her child. That alone is big, but what's even bigger is that Mary accepts, even though it puts her in the awkward position of being the godmother of her husband's lovechild. She puts the pain aside and makes the choice (putting her privilege to make them to good use) to love and support her friend.