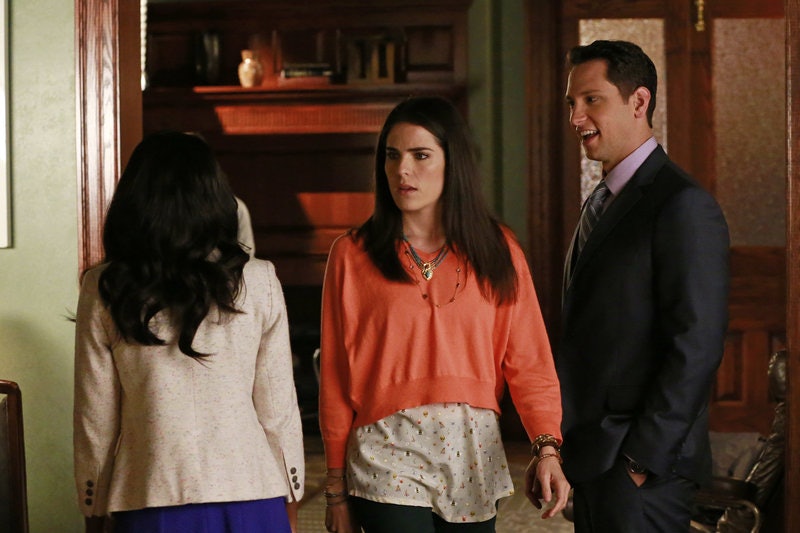 With every new week, and with every new episode, we learn a little more about each law student on How To Get Away With Murder. Well, tonight was Laurel's time to shine on HTGAWM , and shine she did. From the beginning of the season, Laurel was the wallflower. She apologized for everything, seriously everything — don't say sorry for being you girl! — but on Thursday's episode, we saw Laurel have a little more bite to her, and it was great. And finally, we learned more about Laurel's relationship with Frank, which it seems like she may totally use to her advantage in covering up Sam Keating's murder.

When the law students were in the woods, as they are multiple times throughout the episode, Laurel kept getting phone calls from Frank. First of all, Laurel, my girl, when trying to dispose of a body, do yourself a favor and put on "Do Not Disturb" please. It's easier for everyone involved. Secondly, Laurel, you sneaky girl, you've got Frank wrapped around your finger. 'Atta girl!

After ignoring the first phone call, her friends — although she says they aren't her friends — tell her to answer the second call from Frank since it will help solidify their alibi of being at a bonfire. So, because she does what people tell her — she's working on it, though — she answered the phone. Frank, frantic on the other end of the phone call, pleads with Laurel, saying he will do anything. ANYTHING. Laurel, looking very suspicious, says it is too late. WHAT IS TOO LATE?

Frank seems pretty into Laurel. When Laurel turns over some papers to tamper with the jury during this week's trial, Frank refused to tell Annalise it was Laurel specifically. So it seems that he will go to great lengths to cover up for her, but how far will he go? It seems like Laurel might be able to use Frank's eagerness to help her and her friends cover up Sam's murder. And on that note: Laurel called herself a murderer tonight, so she (and probably the other students) definitely had a hand in killing Sam.

Flash forward to Laurel knocking on Frank's door asking him if he really meant he would do anything for her. He says yes, he seems pretty sincere. That's when she pulls out the immunity idol — a.k.a., murder weapon — and says she needs his help. So will Laurel get Frank to help cover up the murder? It seems like it could be heading that way, which would just add one more person to the list of involved suspects in Sam Keating's murder.