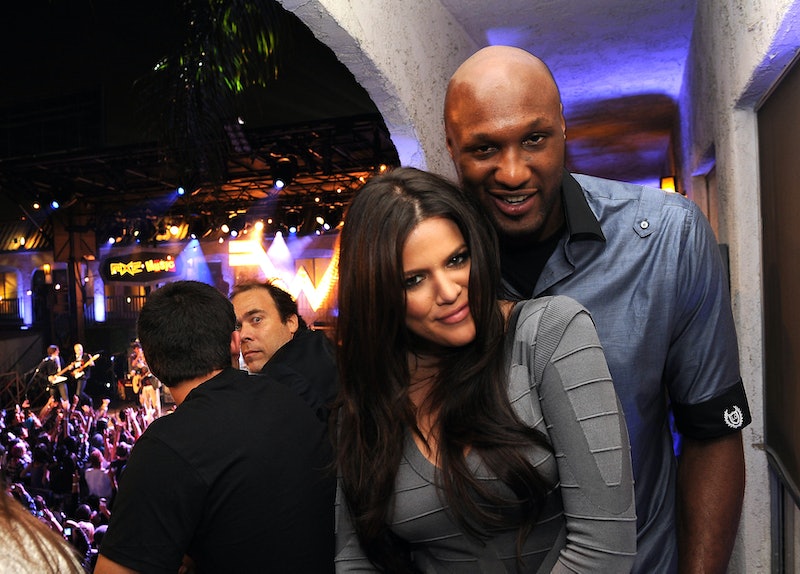 There's good news and bad news for Khloé Kardashian, as if she didn't have enough to deal with after her breakup from French Montana. A brand new rumor revealed that Kardashian couldn't contact Lamar Odom to finalize their divorce because, quite frankly, he had disappeared. Vague sources revealed that he refused to sign that divorce papers and that she was having trouble tracking him down, mainly because he was hoping to reconcile with her now that she is single again. I wasn't the biggest fan of Montana and Kardashian as a couple, but he personally seemed like a better fit for her than Odom by the time they were two seconds from done. However, according to an update from People, Kardashian can still file for divorce from Odom with or without his signature. Really, she only has two options here.

Citing legal papers filed by a Los Angeles judge on October 9, People reveals that Kardashian can file a Request to Enter a Default or a Request for Dismissal. In the former case, a spouse who has been given 30 days to respond to divorce papers is no longer required to participate further in the divorce proceedings. Essentially, Kardashian can finalize the divorce with or without Odom's permission or presence because there are no properties or children between them to negotiate. In the latter case, the Request for Dismissal, Kardashian can choose to cancel the divorce proceedings entirely.

Both parties have at least given the appearance of moving on from their former relationship in the time since they called it quits, but this messy legal issue and/or rumor makes the whole thing ten times more complicated. After all, Kardashian filed for the divorce from Odom ten months ago and it's only now that people are finding out that he hasn't responded at all. Is she unaware that she has the option of a Request to Enter a Default or is she simply trying to be as fair to Odom as possible by allowing him to participate in the proceedings no matter how long she has to wait? Is he really hoping to reunite with her by keeping her legally bound to him or did he quite simply lose the papers and forget about them?

Regardless of why it's taken this long for both parties to agree to separate — or for Kardashian to continue to carry on in the legal separation without him — it's good to know that she at least has options. Being forced to wait until Odom can be tracked down and coerced to sign the divorce papers despite both of them essentially moving on is an unfair position for Kardashian to be in.