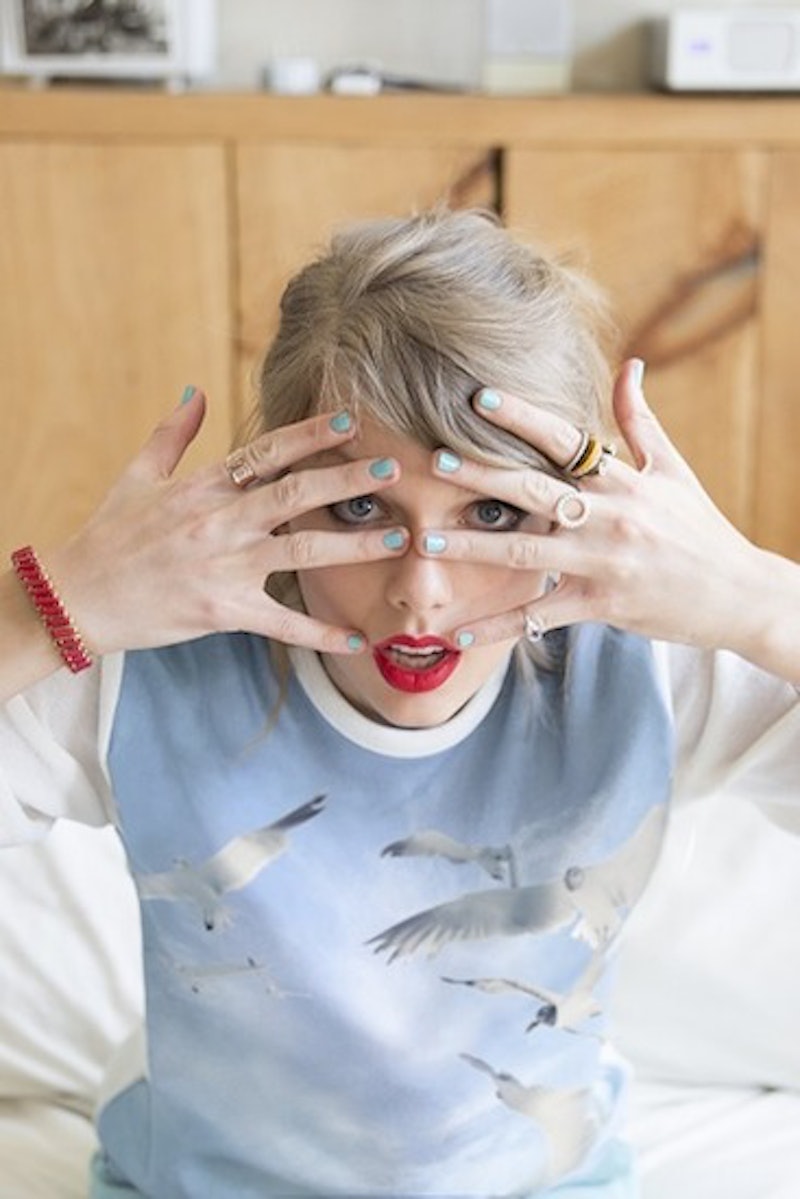 Last night, Taylor Swift's Target commercial caused me to sing and then have a mini panic attack about where to pre-order 1989 . The album is set to drop on iTunes late Sunday night, and I've had it pre-ordered since T. Swift shared the exciting news on Yahoo! in August. I thought I was set. But then I realized there are so many other options out there, including Target's deluxe edition with three bonus tracks and three songwriting "voice memos" and all the packages up on her official site. Thankfully, we're still a few days out from the release, so there's time to cancel my iTunes purchase and get myself a physical copy... and/or the exact seagull shirt she wears on the cover.

If you're in full Sophie's Choice mode about which pre-order to buy, don't worry, I've got you covered. Below, I'll break down all of the options, from the super-cheap digital version that auto-downloads the second Swift decides to release it to the world, to the uber-expensive fan package that has a 1989 backpack, tote bag, and a signed, framed lithograph of Tay herself. And as a bonus, know that wherever you buy it, you can enter to win the SwiftStakes — a.k.a. a chance to get two tickets and a meet and greet to a future show or one of 1,989 other prizes.

1989 costs $12.99 on iTunes and will automatically download new tracks as Swift releases them. You will be the first to get the album when it drops on Oct. 27 — well, likely the night before — and have a dance party.

The deluxe (or as Swift says, "D.L.X.") version of 1989 is exclusive to Target and includes three bonus tracks and three "voice memos" from her songwriting sessions. It rings in at $13.99, which is only $1 more than iTunes.

This is where things get tricky: there are many different packages for 1989 pre-orders in Swift's official store, ranging from a fun "Players Gonna Play" tank top to a huge $198.90 smorgasbord.

The "small package" for 1989 includes the CD, a guitar pick pack with her face on them, and a signed note from Swift. This is just a copy of a note she wrote — it's not personalized to you — but still pretty cool. And affordable!

The price jump is a little crazy from the small to medium, but it does come with a lot more. The "medium package" for 1989 comes with the CD, guitar picks, and note plus a tote bag, key chain, hair ties, and a lithograph of Swift making nine silly faces.

This is by far the ultimate Taylor Swift fan package. The "large package" for 1989 has everything mentioned above plus a backpack and a personally signed and framed lithograph of Swift. This would be perfect for school if I was still a teenager.

For about $20 more than just buying the "small package," you can get the CD and a "Shake It Off" t-shirt to show your Swiftie pride. It comes in unisex and ladies sizing, too, so you and your BFF or boyfriend can match.

Alternatively, you can get a white muscle tank top with "Shake It Off" lyrics. Embrace your inner T. Swift all day, every day.

If you want to be Swift for Halloween, this may work out. The seagull long-sleeved shirt she's wearing on the cover of 1989 is available with your CD pre-order.

More like this
The Very Best Quotes From Dr. Taylor Swift’s NYU Graduation Speech
By Grace Wehniainen
Taylor Swift Is "Spiraling" After Releasing "This Love (Taylor's Version)"
By Jake Viswanath
This Is How Taylor Swift Feels About Joe Alwyn’s Steamy New Series
By Alyssa Lapid
Ashley Judd Wrote About Late Mom Naomi, Choice, & Motherhood In A Powerful Essay
By Grace Wehniainen
Get Even More From Bustle — Sign Up For The Newsletter