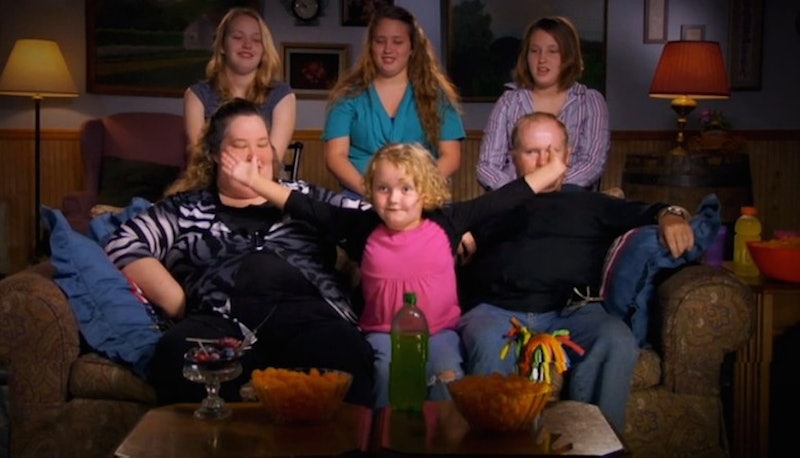 UPDATE: According to Deadline , TLC has now released official confirmation of the decision, saying, "TLC has cancelled the series Here Comes Honey Boo Boo and ended all activities around the series, effective immediately."

PREVIOUS: This story just keeps getting more and more troubling. After rumors broke yesterday that the popular TLC series Here Comes Honey Boo Boo could be in jeopardy because of Mama June's reported new relationship with a convicted child molester, Mama June herself spoke out about her new beau — and, according to her, the reports (which originated on TMZ ) are not true. Though, for the sake of her children, I obviously hope this is the case, it's beginning to seem like it may not be: According to a new report from TMZ, TLC may have just canceled Here Comes Honey Boo Boo in light of the terrible reports.

This news comes just after Mama June posted a statement regarding the rumors on her daughter's Facebook page:

I want to make a post trying to clear up the rumors remember you can't believe everything you read! Ppl sell stories to the tabloid everyday that r false! It isnt true i promise my kids r #1 priority over anything else and I would never put them in danger period over this or anything else they r my life this is my past I left him 10 yrs ago for it and I wouldn't go back

The story, which TMZ originated, basically stated that the man she's been seeing since her separation from husband Sugar Bear is 53-year-old Mark McDaniel, who was convicted of aggravated child molestation in 2004 for horrifically assaulting a relative of Mama June's who was 8 years old at the time — a relative that Mama June still has contact with, apparently.

Though I would really, really like to believe Mama June's statement considering the fact that her young daughter, Alana, is just 9 years old, I have to honestly say that it doesn't read as quite genuine — especially when you consider that she denies it without really giving reasoning as to why the rumors would surface (diversion tactic?) and that TMZ's report included a photo of Mama June with Mark McDaniel in a hotel room two weeks ago. Now, with TLC's reported decision, the rumors seem even more damning.

After the story initially broke, TLC released a statement stating, "TLC is not currently in production on Here Comes Honey Boo Boo. We are very concerned about this new information and are reassessing the future of the series." Now, with TLC's apparent decision to abruptly cancel the series, it seems all too apparent that the rumors are likely true — if there wasn't solid evidence in the network's hands, I find it hard to believe that they would get rid of a show that's been such a success for them in the past.

According to TMZ's updated report, TLC has shot new episodes of the series, but does not plan to air them in light of their decision — they do, however, plan to keep track of the kids to ensure they remain safe at this time. "Supporting the health and welfare of these remarkable children is our only priority. TLC is faithfully committed to the children's ongoing comfort and well-being," a source reportedly told TMZ on behalf of the network, additionally promising that the kids will receive paid-for tutors and counselors on the network's dime.

What a mess. Hopefully, Mama June will see the error of her ways at this point — if not for her own sake, at least for the sake of her children.

More like this
Where Is Armie Hammer’s Ex-Wife Elizabeth Chambers Now After 'House Of Hammer'?
By Grace Wehniainen and Radhika Menon
What Is 'Pretty Wild' Star Tess Taylor Up To Now?
By Morgan Leigh Davies
After The Bling Ring, Nick Prugo Was Embroiled In Another Scandal
By Arya Roshanian
Who Is Nick Cannon Dating & How Many Kids Does He Have?
By Jordyn Tilchen and Radhika Menon
Get Even More From Bustle — Sign Up For The Newsletter