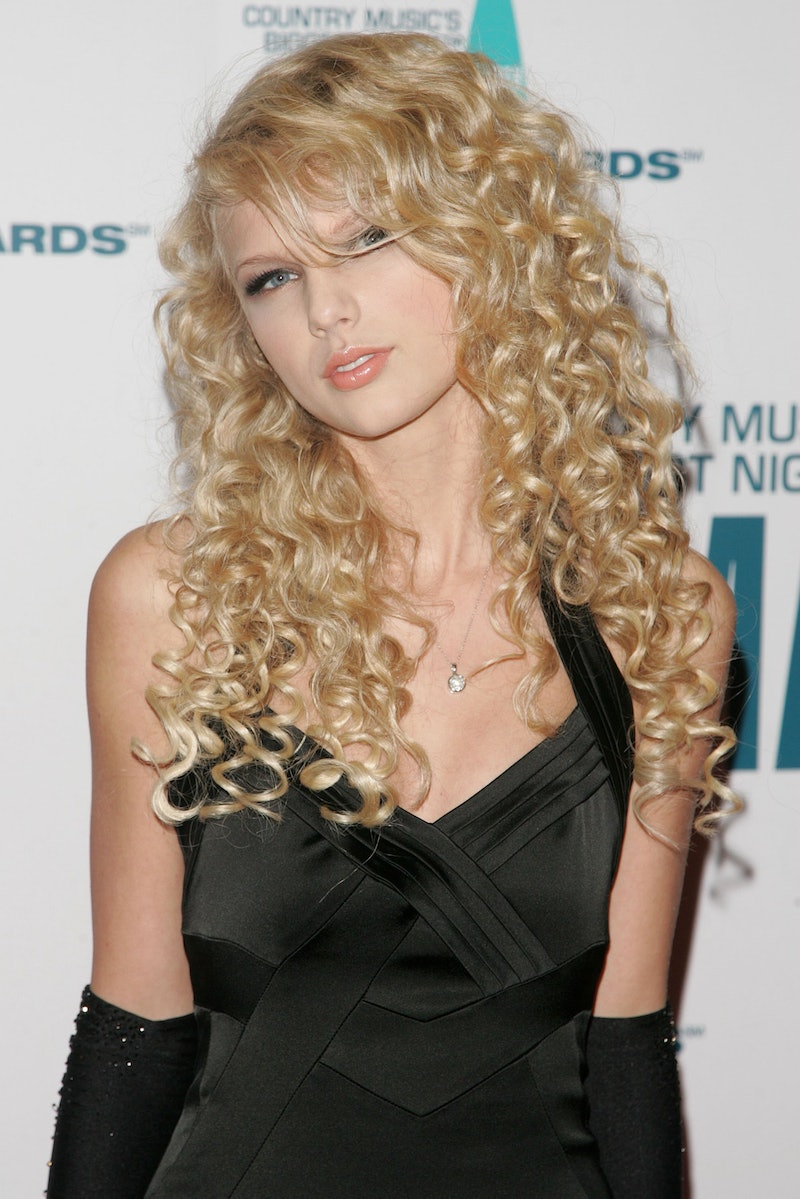 Taylor Swift's transformation is complete. In less than a decade in the industry, she has completely reinvented herself from a wide-eyed, sweet country princess with corkscrew curls to a full-blown pop star. This was solidified in her performance of "Out of the Woods" on Jimmy Kimmel Live ! on October 23, where she rocked hot pants and a matching glitzy bralette and ditched her guitar to dance during the performance. With the release of 1989 just a few days away, it's time to embrace pop-star Swift, but let's not forget about her country roots.

To celebrate the new era of T. Swift, I think it's time to look through her whole transformation. Remember when her self-titled album dropped in 2006 an all she wore onstage were ball-gowns and rhinestone-covered dresses? Over the years, her hair has changed a lot, going from crazy curls to beachy waves to a trendy lob, and she's mastered her signature red lipstick. On stage, she's grown more confident and incorporated some dance moves to performances rather than just standing behind her guitar or sitting at the piano. These changes could have just happened because of growing older — though she's still only 24! — but they also move along with the shifts in her music.

She's always sang about love, but as she endured many relationships (leading to her current "dating hiatus"), the tone of her lyrics changed. And above all else, she moved from country twang to pop-country (especially on Red), and now a full-on pop album, complete with danceable tracks and electronic sounds.

This was Swift's first-ever live band performance at the CMA Festival in 2006, and surprisingly, she kicked off "Picture to Burn" with trash-talking her exes. "If you're gonna break my heart or make me mad, I'm gonna write a song about it," she says before rocking out.

Remember the music video for "Teardrops on My Guitar" costarring Tyler Hilton? Good times, good times. She was still so young and innocent, wearing that glamorous green gown while clutching her guitar in bed. Those rhinestones in her face were kind of a signature look, and she was all about dramatic makeup to complement her big corkscrew curls.

At the 2008 CMA Awards, Swift was literally in the middle of a fairytale. Look at that prince and princess falling in love next to her! And of course, she was wearing a huge purple ball gown that made me feel like I was watching Cinderella. She pulled out a big surprise toward the end of the song, though, changing into a white bridal-inspired dress before the big proposal line of "Love Song."

"This is a song I wrote about a guy who made the choice to cheat on me and probably shouldn't have, because I write songs," Swift says before launching into "Should've Said No." She ditches her guitar midway through the song to rock out with the crowd before getting totally drenched in fake rain at the end. Total rockstar.

Look. At. That. Straightened. Hair. At the 2010 AMA Awards, Swift sat down at the piano with a sleek ponytail and bangs for a rendition of "Back to December." She is wearing a black pantsuit, a far cry from the dresses we always saw her in, and she gets up from the piano to cover OneRepublic's "Apologize" briefly, too. Totally destined for pop stardom.

Though she changed up her hair and her outfits sometimes, her 2011 tour still had all the cute dresses and curls she was known for. But when she brought out Justin Bieber and sang "Baby" with him (remember when they were friends, before the Selena Gomez drama?) she showed she can tackle pop music. He did most of the dancing, though.

Swift put down her guitar and donned a costume for "We Are Never Getting Back Together," and of course, this song also includes her infamous speaking part (which she sometimes speaks in a British accent, cough, Harry Styles). She doesn't have quite as many costume changes as artists like Katy Perry, but since they're feuding, she probably doesn't want to be like her anyway.

I doubt that 2006-era Swift would ever have imagined herself walking down the runway at the Victoria's Secret fashion show or performing in this disco-ball-like silver dress. With sleek, straight hair and a total bombshell look, she looked right at home with her future BFF Karlie Kloss. We've almost reached full pop star status.

Here it is: pop superstar Taylor Swift. For her first performance of "Out of the Woods," she wore sparkly hot pants and a bralette onstage at Jimmy Kimmel Live!, looking smokin' hot and dancing instead of rocking out with her guitar.