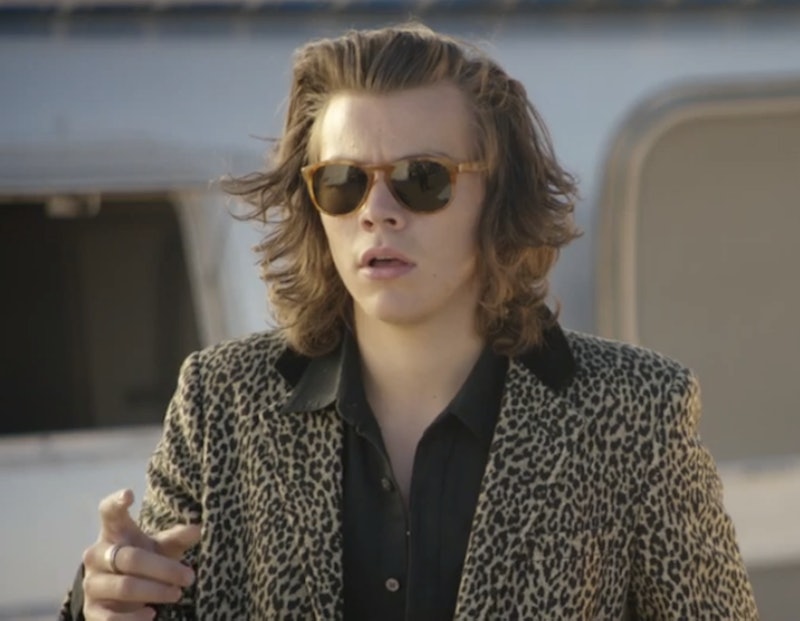 OK, first off: WHO HAS BEEN RECORDING MY DREAMS? And more importantly, who copyright infringed on one of my very best dreams ever to make One Direction's "Steal My Girl" music video guest starring Danny Devito? If you haven't watched yet, it's brilliant swirl of sumo wrestling, Zayn Malik with a chimpanzee, and, of course, Harry Styles' hair looking far better than it ever has.

"NO QUESTIONS!" Devito shouts at the beginning of the video. But I have so many. Like, who decided Styles' couldn't wear his fabulous man bun at all during this video? And may I kiss that person? Because, as it turns out, he's been hiding some luscious, shoulder length locks in all those knots and pretty braids.

There are a lot of really great parts of this music video, but, as per usual, Styles' strands take the GD cake. It flows all over the screen — much like I imagine an angel's would — stealing the scene (somehow) from his leopard print peacoat, not to mention all the balloons and Breaking Bad-esque set they're filming on. But enough talking about his perfectly piece-y strands — let's break down his hair frame by frame, shall we?

The boys step out of their trailer. The majesty of Styles' hair is not yet fully recognizable.

Then, Devito breaks down all their roles. Styles is, naturally, "Love," and we zoom in on his hair.

Don't be shy, Harry. Let's get another close-up.

Honestly, the most majestic thing I've ever seen. Whether he's...

Peeking through a mysterious sky door...

Or ohmigod dancing in the rain with Danny Devito.

Cheers to you and your hair, Mr. Styles

PS: Here's the whole video, if you need it.