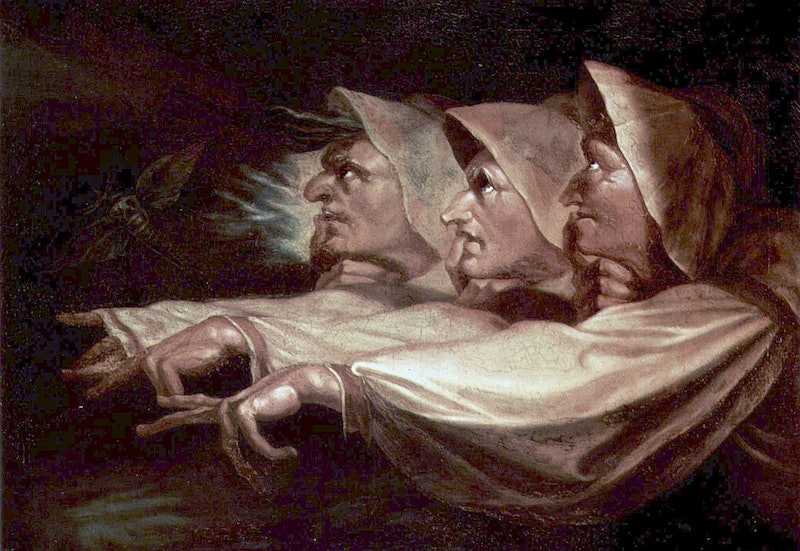 Halloween is here and October is drawing to a close. The leaves are falling, the air is chilly and crisp, and night comes earlier and earlier. That means one thing: the witching season is upon us!

The witch has long been a classic female cultural icon; like all female icons, she's a host of contradictions, complications, and shifting signifiers. If you're like some people, she's terrifying, and unnatural — all the marks of a villain. To others, though, her abilities, independence, and transgressions are a source of empowerment and inspiration. Either way you see her, she's kind of cool.

For some of us, the word “witch” immediately calls to mind the '90s-era sorceresses we grew up on and loved: the Sanderson sisters of Hocus Pocus, Sabrina the Teenage Witch, the goth teens of The Craft , and even our beloved Hermione Granger. Witches are awesome — and many of us wanted to be one or at least hang out with one for basically, like, half of our childhoods. (If not, well, still now.) Look back a little further, however, and you’ll find that classic literature, plays, poetry, and mythology are chock-full of seriously badass witches that will send a chill down your spine. Scary, smart, powerful, and determined, the following seven witches are classics for a reason:

Who they are: When you think “witch,” the first words that probably pop into your head are “double, double toil and trouble/fire burn, and cauldron bubble.” That’s thanks to these three, the witches from Shakespeare’s MacBeth. The sisters predict MacBeth’s rise to king, inspiring his bloody run. Later, though, their words come to haunt him when they misleadingly and eerily portend his downfall.Why they’re classics: MacBeth is a battle-hardened, regicidal social climber with a wife who makes Amy Elliot Dunne look like Doris Day, but it’s these three witches we should fear. Why? Because with just their twisted words, the poison they pour into MacBeth’s ear, they are the ones that start this whole bloody saga.

Wicked Witch of the West, The Wizard of Oz

Who she is: The villain in L. Frank Baum’s The Wizard of Oz, a number of film adaptations of Baum’s books as well as more recently, the TV series Once Upon A Time. She has also popped up as the protagonist of Gregory Maguire’s Wicked. She is the ruler of the hilariously-named Winkie County, but don’t be fooled: this witch is no laughing matter.

Why she’s a classic: If MacBeth’s Weird Sisters give voice to the classic witch of popular imagination, her look is pure West: the green skin, the gaping sneer, the pointed noise and the black hat. The witch herself is pretty easily defeated, but she manages to inspire a lot of fear and do a fair bit of damage before her untimely demise. Plus she leads her own terrifying, airborne simian army. Enough said.

Who she is: A Greek goddess of magic, Circe is basically the Ur-Witch, the O.G. of sorceresses. She was known for her expertise in the areas of potions and herbs, and for her staff, with which she could transform anyone who crossed her into an animal. She lives alone in a thick forest with a pack of wolves she has tamed. Why she’s a classic: In Homer's Odyssey, Circe lures Odysseus away from his quest into her forest, drugs all his men and turns them into pigs, and then he still sleeps with her — and sticks around for a year! This combination of self-sufficient isolation, sexual allure, and the ability to transform powerful and wild creatures into something weak and tame (hello, emasculation metaphor) made Circe a terrifying figure to the men of ancient Greece, but they make her a seriously badass witch.

Who she is: Also known as Morgaine or Morgana (among other things), Morgan LeFay had her start in Arthurian literature as a powerful and mysterious sorceress from the isle of Avalon. Morgan has had a ton of iterations in popular culture, from appearances in Marvel comics to the feminist re imagining of Mists of Avalaon to a series of film appearances (side note: if you have never seen Helen Mirren’s Morgan LeFay deliver her own baby in the cheese-tastic film Excalibur, you wanna do so immediately).Why she’s a classic: Medieval poetry is a genre with more twists and turns than all of Shonda Rimes’ oeuvre combined, but even within this genre Morgan stands out: pupil of Merlin, healer of Avalon, seducer of Knights of the Round Table, exposer of Guinevere and Lancelot’s affair, and alternately ally and adversary to Arthur. Basically, Morgan LeFay is a woman who acts for herself, with a complex and shifting series of motivations.

The White Witch, The Lion, the Witch, and the Wardrobe

Who she is: Also known as Jadis, the White Witch is one of the titular characters of C.S. Lewis’ The Lion, the Witch, and the Wardrobe. With echoes of Eve, the White Witch eats the Fruit of Everlasting Life and gains immortality as well as her immaculate, Wintour-approved coloring.

Why she’s classic: Long before anyone had heard of Elsa, Jadis was responsible for transforming an entire world into perpetual winter. She’s also a witch who won’t back down: Leader of a brutal rebellion against her own sister, she opted to destroy all life in her own realm of Charn rather than admit defeat. Talk about taking the nuclear option!

Who she is: Also known as Wanda Maximoff, the Scarlet Witch debuted in X-Men #4 in March of 1964 and has been a staple of Marvel Comics ever since (and soon you’ll see her come to life in The Avengers 2: The Age of Ultron). Like all X-Men, the Scarlet Witch is a mutant, but her powers have evolved over the decades from “hexes” that alter probabilities to straight-up chaos magic. Why she’s a classic: You gotta love a woman you just can’t pin down. Daughter of uber-baddie Magneto, the Scarlet Witch started out as foe to the X-Men but was recruited as a hero for The Avengers, who she has worked with and against throughout her five-decade history. Always powerful but never predictable, she’s a witch to be reckoned with.

The Grand High Witch, The Witches

Who she is: The arch-villainess of Roald Dahl’s delightfully twisted children’s novel, The Witches. There are a lot of witches in Dahl’s universe, but this one truly takes the cake. In the film adaptation, the Grand High Witch is played by Anjelica Houston, no stranger herself to fairy-tale evil or the gothic. Why she’s a classic: She’s not just a witch, she’s a seriously bad bitch. The Grand High Witch incinerates one of her own deputy witches (and you thought your boss was bad!) and unveils the most sinister witchy plan of all time: for all English witches to buy candy stores, with which to lure children so that they can be turned into mice and ultimately killed. Merciless, bloodthirsty, and creative, the Grand High Witch lives up to her title.