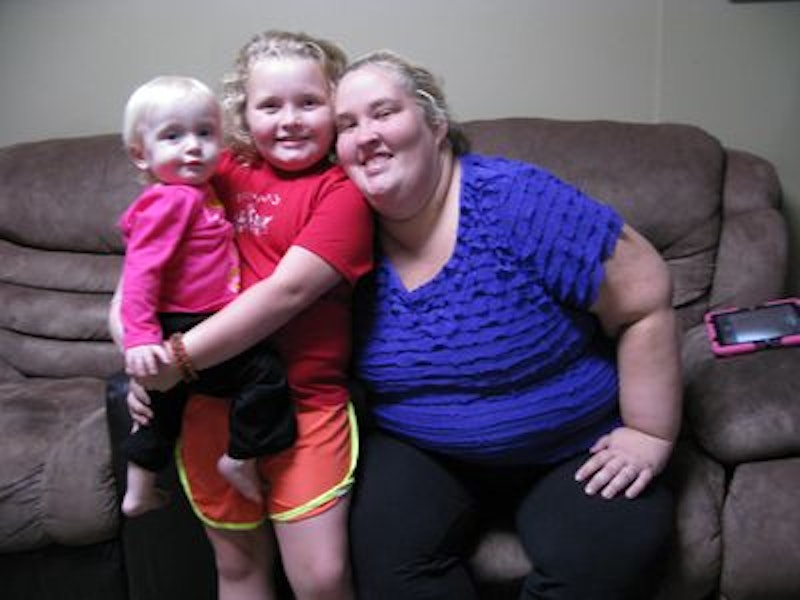 On Friday morning, TLC announced the cancellation of Here Comes Honey Boo Boo amid reports that Mama June is dating a registered sex offender. On Thursday, the claims were first made, after several sites reported that Mama June (aka June Shannon) was once again dating a former flame named Mark McDaniel. Apparently, he was just released after serving a 10-year sentence for aggravated child molestation, after he molested an 8-year-old child, who is supposedly related to June. Immediately, concern brewed, especially for the safety of June's four daughters. Should the show go on? Well, we now all know how TLC feels.

With the news of Honey Boo Boo's status, Mama June decided to speak out via a "truth video" she posted on Facebook soon after cancellation reports came out. She seems very solemn, sorrowful, and appreciative of her fans' support in the video. As you can see for yourself below, June denies that she's currently dating McDaniel, who she refers to as "Pumpkin." She admits to dating him 10 years ago, but is holding firm that she is not seeing this man and any and all reports are "totally untrue." She even notes McDaniel himself says that the two are not together. June also assures everyone that she would never put her children in any danger because she loves them too much.

With all of this said and done, one question keeps popping up: Did TLC make the right call? Should the network have canned a family reality show, because of June's dating situation? When the reports first came out, I had to give it some thought, but, if all of this does turn out to be true, then, yes, I think so. As TLC said in their statement,

TLC has cancelled the series Here Comes Honey Boo Boo and ended all activities around the series, effective immediately. Supporting the health and welfare of these remarkable children is our only priority. TLC is faithfully committed to the children’s ongoing comfort and well-being.

Can you really be angry at a network for trying to protect children? No, I don't think so. And, if true, why should TLC "support" June for dating someone who's committed such horrific and disgusting acts toward children? This is something that should not be taken lightly, especially when it involves the safety of kids.

After TLC's decision, I'm sure another question is now coming to mind: If these claims are proven to be false, will TLC bring Mama June and her family back? Should they be given another chance? In my opinion, I don't think we'll ever learn the truth and it's better to be safe than sorry. More than likely the show will not return, and it's probably for the best.