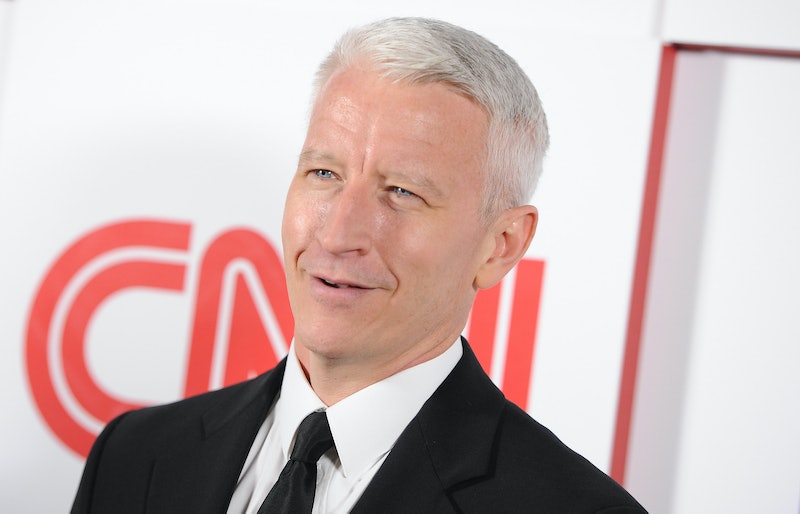 Reporting from the scene of the tragic shootings in Ottawa last night, Anderson Cooper classily rejected another journalist's request to take a selfie. Selfies, generally, are indiscriminate and sometimes obnoxious, and with trends like "funeral selfies" running rampant they really do toe the line of bad taste. But Anderson Cooper, forever our hero was dignified when put in a tough spot by someone who obviously lacked the same dignity. Vandon Gene, of the Sun News Network, approached the silver fox at the site where a soldier was killed, and when Anderson said no, Vandon was dickishly incredulous about it.

You can watch a video of the incident below. Please note that Vandon uploaded the video to the Internet; to what, have people side with him? Have his 15 seconds of fame? Gross. In the video, Anderson firmly (and terrifyingly, given that his wrath is equal to his grace) tells Vandon he would not be taking a photo with the rookie reporter "on a day where someone was killed." Anderson calls the suggestion of a photo at that moment "wildly inappropriate," and I am in complete agreement. Tragedy is not a time for self aggrandizement and celebrity spotting. I sincerely hope Vandon learned a valuable lesson from the clearly far more rational and empathetic Anderson: your social media likes are never as important as real life, especially when that real life involves the unspeakably horrific death of innocent people.

Vandon also released a tirade of Tweets against Anderson, but they've since been deleted in probably the only sensible move Vandon has made throughout this whole affair. Anderson Cooper, however, not needing a reason to back down in the face of complete lunacy, went for Vandon's jugular with his own completely justified Tweets:

The second lesson in all of this? Don't mess with Anderson Cooper on serious business.