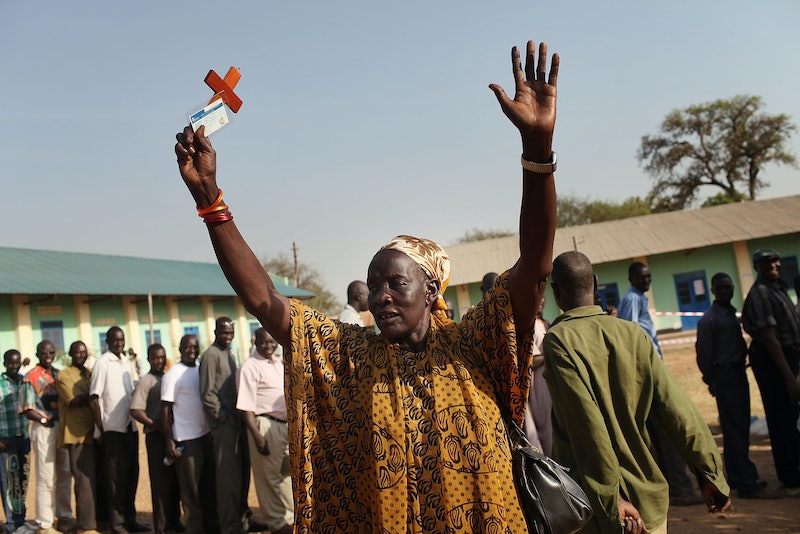 The current conflict between South Sudan's government troops and rebel forces doesn't seem to be going anywhere, and the country has been embroiled in crisis after crisis since it gained independence from Sudan in 2011. Now, South Sudanese women have proposed a sex strike to restore peace to South Sudan.

A group of roughly 90 female peace activists, including parliamentary members, passed the resolution the week before at a meeting in the nation's capital, Juba — one of several congregations aimed at drawing attention from the international community to end the conflict, according to a report from local paper Sudan Tribune.

In a statement released on Thursday, organizers said of peace efforts:

A key suggestion was to mobilize all women in South Sudan to deny their husbands conjugal rights until they ensure that peace returns.

According to the Sudan Tribune, former Deputy Minister for Gender, Child and Social Welfare Priscila Nyanyang also told reporters that the group planned to arrange meetings with the wives of leaders of both sides in the conflict to personally “ask them to join the search for peace and reconciliation by impressing upon their husbands to stop the war."

Nyanyang, who is also the lead coordinator of the event, added that it was necessary to involve the wives of the combating leaders, because they played "a big role" in bringing peace to the country.

The 10-month-long crisis in South Sudan has displaced 1.4 million people internally, said a UN report. Back in January, David Blair at The Telegraph reported that "at least 17,000 refugees live on about 45 acres of sun-baked ground" that was the UN base until people fleeing the war flooded the area, making it one of the most densely populated places in the world.

Sex strikes aren't new — women in Liberia, Colombia, Togo and the Philippines have denied their husbands "conjugal rights" as part of a non-violent form of protest. Liberia's sex strike in 2003 was led by Leymah Gbowee, who went on to win a Nobel Peace Prize for her efforts. In an interview with Huffington Post, Gbowee conceded that sex strikes may not be effective in a practical sense, but it certainly works to "get people's attention."

Good men outnumber evil men, but why are they silent? Our strategy helps the good men because it gives them a reason to take action... We withheld sex from our spouses to get attention, and our husbands obviously noticed what we were doing. We said, "we need you to take a stand." And they did.

Jane Kane, a women's rights activist based in the U.S. suggested that Liberian women adopt other approaches such as peaceful demonstrations, sit-ins and occupying government and military institutions, major streets or bridges and venues of peace talks, the Sudanese paper reported.

The viability of a sex strike in South Sudan is questionable to me, personally, not only because of the education disparity in genders — education being a huge factor in empowering women — but also in light of remarks by Zainab Bangura (the UN Secretary General's Special Envoy on Sexual Violence) that women and children in South Sudan are victims of the worst sexual violence she's ever seen.

The report also noted that after visiting a UN camp in Bentiu, a town in South Sudan, in early October, Bangura said of the sexual violence in the beleaguered country:

While refusing their spouses sex as a form of protest might call attention to the pressing need to end the conflict, the women of South Sudan could also use the momentum generated from the strike to push for peace through other approaches.