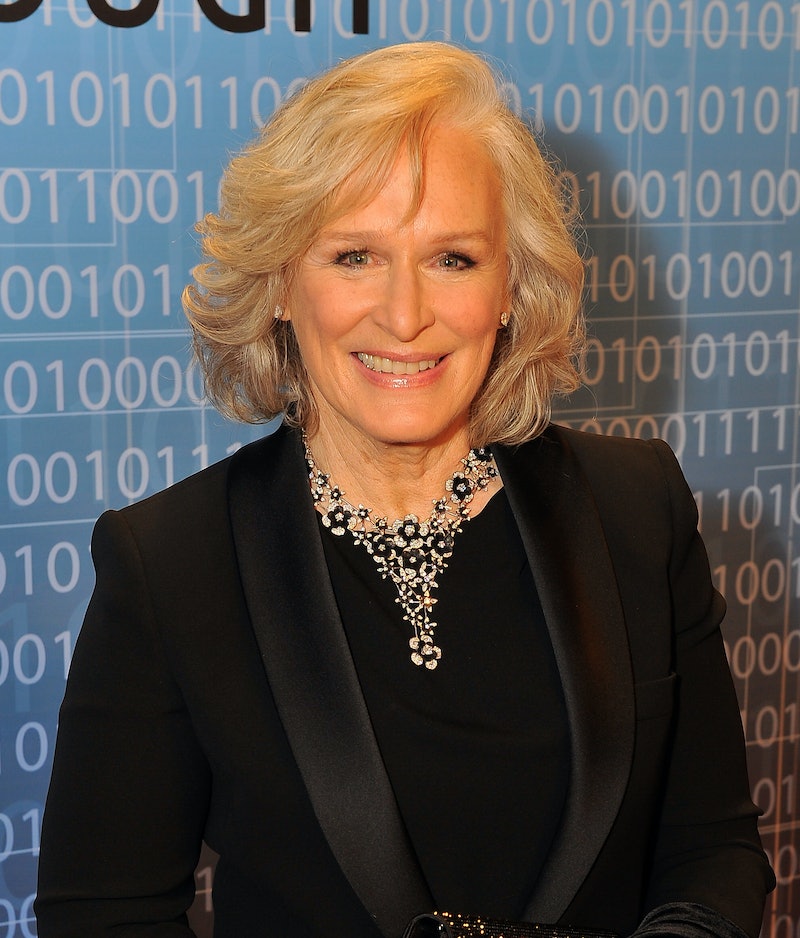 Academy Award-nominated actress Glenn Close poses a very good question about mental illness: "Why in the hell don't we talk about it?" Close is sick of people sweeping such a serious issue under the rug, so she's taking a stand by talking about it herself, specifically her family members who suffer from bipolar disorder and schizophrenia, in an exclusive interview with People. Mental illness is something Close's family has dealt with for generations — they've even bonded over it — but when her sister, Jessie said, "I can't stop thinking of killing myself," that really shifted things into perspective.

Upon hearing that, Close experienced a range of emotions, including shock, relief, and sadness. To hear that her sister was in that much pain, Close found her the help needed and soon enough, Jessie was diagnosed with bipolar disorder at 51 (she's now 61). The Close family has a long history of mental illness, including an uncle who committed suicide, another uncle who suffered from schizophrenia, and Jessie's own son who was diagnosed schizoaffective disorder (bipolar with symptoms of schizophrenia).

In 2010, Close knew she had to take a stand and do something to help her family and others suffering from mental illness, so Close created Bring Change 2 Mind. The organization counters the silence and stigmas surrounding mental illness. Close told People, "One in four people are diagnosed with a mental illness at some point in their lifetime," which brings us back to that very first quote above, "So why in the hell don't we talk about it?"

It's true. When difficult issues are brought up, some people choose to ignore it completely, run and hide, and act as if nothing is wrong. This doesn't fix the situation, and, thankfully, we have people like Close willing to do something about it.

As of lately, more celebrities have been spreading the word, like Demi Lovato who deals with depression, and Zelda Williams who's father Robin Williams committed suicide and suffered from severe depression. Similar to Lovato and Williams, Close is facing her family's history, which has been both painful and healing. She chooses to look at it positively, rather than dwelling on the negative.

"I remember once reading a study how many creative families have mental illness," Close said. "And Jessie said to me one day, 'Well, I guess I am the sacrificial lamb.' And you know, that's hard. It's sad and it's a struggle." Despite that, Close added, "I do think it has brought us closer together as a family."