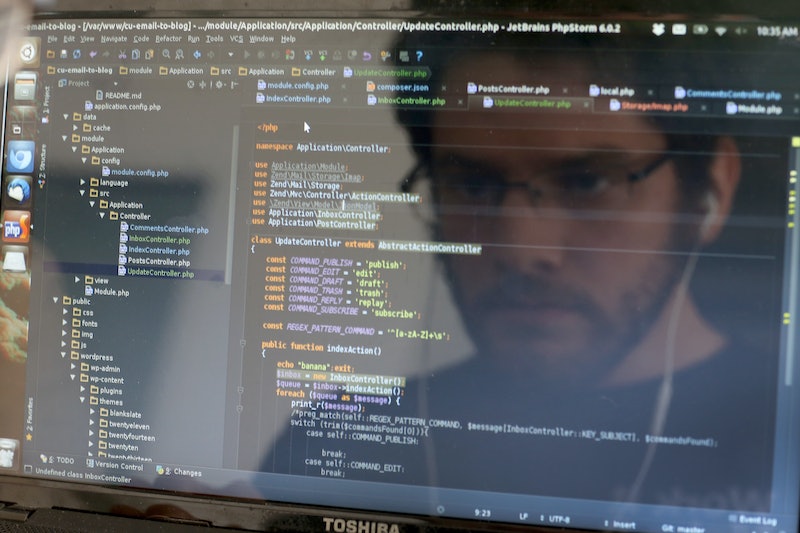 Men outnumber women by a margin of seven to three when it comes to tech jobs in the United States. In New York, an overwhelming 80 percent of software developers are men. Today, women comprise a mere 17 percent of computer science majors in college. But it wasn't always like this. 50 years ago, half of computer programmers were women. What happened? Indiegogo documentary Code wants to know why women stopped coding, and if we want to fix this ridiculous seven to three gender gap, we need answers now.

The tech industry is undeniably male dominated, and has departed from its geeky reputation and evolved into a culture of "brogrammers," a frightening concept that combines the inherently sexist attitude of frat stars with an ability to "bro down and crush some code." On Quora, one of the more popular answers to the question, "How does a programmer become a brogrammer?" reads,

Lots of red meat, push-ups on one hand, while coding on the other, sunglasses at all times, a tan is important, popped collar is a must. It's important that you can squash anyone who might call you "geek" or "nerd" and that you can pick up girls, but also equally important that you know the Star Wars movies byheart, and understand programming ideas, like recursion and inheritance.

While this is a facetious answer to a (hopefully) joking question, the fact remains that the brogrammer is not only a real person, but also a widely perpetuated stereotype of an exclusive, misogynistic, all boys club tech industry. In a 2012 piece for Mother Jones, Tasneem Raja reported attending a South By Southwest conference in which Matt Van Horn, a young executive at social media company Path, told his audience that he'd landed a job at Digg by sending them "bikini shots" from a "nudie calendar" he created by aggregating photos of his classmates in swimsuits. He also referenced "gang bang interviews," and drew parallels between the company hiring process and the methods his fraternity used to "attract the hottest girls" on campus.

It hasn't gotten any better either — 2014 saw the release of a series of horribly sexist emails from Snapchat CEO Evan Spiegel, as well as a lawsuit against Tinder co-founders Justin Mateen and Sean Rad for a "barrage of horrendously sexist, racist, and otherwise inappropriate comments, emails and text messages." And we wonder why there aren't enough women in tech.

a need for answers

Did this backwards, sexist mentality develop because of the lack of women in tech, or was it the other way around? What happened between 1960 and 2014 that made the number of female computer scientists take a nosedive? And most importantly, how do we turn things around?

Robin Hauser Reynolds has raised nearly $90,000 to find answers through her upcoming documentary, Code. With the the U.S. Bureau of Labor Statistics predicting that there will be 1.4 million computer science jobs by 2020, and only 400,000 computer scientists, Reynolds' timing couldn't be better. We are in a prime position to reclaim a field that was once run by women.

Nathan Ensmenger, author of The Computer Boys Take Over, found that in the 1940's, six women operated the University of Pennsylvania's ENIAC machine, one of the first computers in the world. A couple decades later, up to 50 percent of computer science jobs were held by women. More surprising still, Fast Company points out, was the societal encouragement of women to pursue computer science, and not in today's remedial let's-fix-this-gender-gap sense.

In 1967, Cosmopolitan ran an article entitled "The Computer Girls," praising computer science as the perfect field for young women. The article read,

Now have come the big, dazzling computers--and a whole new kind of work for women: programming. Telling the miracle machines what to do and how to do it. Anything from predicting the weather to sending out billing notices from the local department store. And if it doesn't sound like women's work — well, it just is.

the rise of the personal computer

What changed? According to NPR, the reason is simple — computers became popular. In a recent segment, they point out, "The share of women in computer science started falling at roughly the same moment when personal computers started showing up in US homes in significant numbers." And they were geared almost exclusively towards young boys and men. A 1980's commercial for these new PC's portrays young boys fascinated by computers, but not a single girl is shown using the device.

That became the norm — parents bought computers for their boys, and Barbies for their girls. Women were socialized to shy away from technology, and were effectively discouraged from developing an interest in computers. And this childhood trend presented a huge problem for women as they began to enter colleges and universities. By the 1980's, NPR reports, professors began assuming that their students came into the classroom with computer experience. After all, the male students did, so why wouldn't the girls, too?

Patricia Ordóñez recalled one of her first computer science classes at Johns Hopkins University in the 1980s to NPR:

I remember this one time I asked a question and the professor stopped and looked at me and said, 'You should know that by now,' " she recalls. "And I thought 'I am never going to excel.'

Ordóñez, like many other women, set a self-fulfilling prophecy for herself. She received a C in her class, and abandoned the idea of majoring in computer science. Many years later, she returned to the subject, and now has a Ph.D. in computer science and teaches at the University of Puerto Rico.

But she's one of the lucky ones. For other women, those who are assumed to be better at reading than at science, the stereotype threat, which Fast Company describes as a "psychological pressure from a negative stereotype that can actually damage performance," is a very real impediment to progress. Women who are told that their gender affects their abilities have been shown to perform considerably worse on tests than women who are not.

And considering that Code discovered that "across 34 countries, 70 percent of men and women view science as more male than female," the barriers to female entry to computer science and other STEM fields looks increasingly systemic.

So what can be done? Code finds that even small things in tech workplaces, like changing decorations to deemphasize typically male, computer-science related objects like Star Trek posters might help. There are also female coding academies like Hackbright that attempt to place more women in software development positions. And then, of course, there are projects like Code, which actively seek to unpack the reasons behind this enormous disparity between men and women in tech. And hopefully, if we're interested enough in the problem, we'll be motivated enough to find a solution.