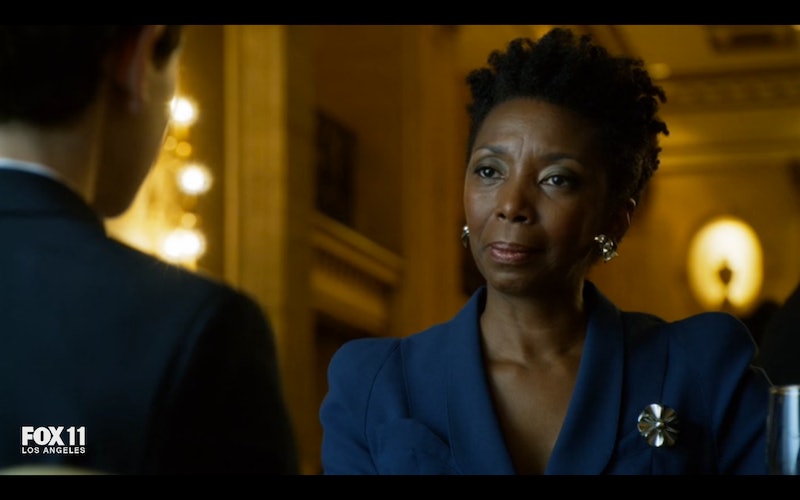 Last week's Gotham episode actually left some questions lingering, because even though Stan Potolsky was carted off in a body bag, his drug is still in the hands of Miss Mathis. But who is Gotham 's Miss Mathis? We know she's an associate of the Viper-dispensing Potolsky, and that she must succeed at least a little because "Viper" was a version of Venom, which is the drug that Bane uses to juice his supernaturally strong muscles. But she doesn't work for WellZyn, the drug company that housed Potolsky and the facility where he developed Venom/Viper. Instead, she works at Wayne Enterprises, the company owned and, until their deaths, managed, by Thomas and Martha Wayne.

She calls herself mere "middle management," downplaying her power and influence, in favor of "the board," but the final scene of her sitting in the car outside of Warehouse 39 (a nod to the first ever Batman comic's publication in 1939?), handling the Viper disposal, points to her having more power than she's admitting to. Whether she's doing the board's dirty work or they're just puppets and she's the one pulling the strings from her position midway down the totem pole, she knows something. And judging from her call at the end of the episode, she's keeping a close eye on Harvey Bullock and James Gordon, who believe the Potolsky Viper trail to be dried up.

And we know that the young Bruce Wayne is on her tail, and determined to uncover whatever corrupt conspiracy is attempting to turn the altruistic Wayne Enterprises into a big business that's under Falcone's control and barely resembles what the progressive-minded Waynes would have wanted. And something tells me that Miss Mathis may be the first of many people bested by Bruce, the future World's Greatest Detective.

Sharon Washington, the actress who plays Molly Mathis, has done a good number of procedurals like Law & Order: SVU before (she's played five different SVU characters over the years). She's also a Broadway veteran, and has been in countless plays and musicals. Until Halloween, she's starring in While I Yet Live , a play about growing up in Pittsburgh. And if you really love Miss Mathis, Washington has a pottery studio where she sells some very nice ceramics. So far, her website only says that she's been booked for "Viper," that single episode, but as with everything on Gotham, there's no way to tell whether or not she'll return.