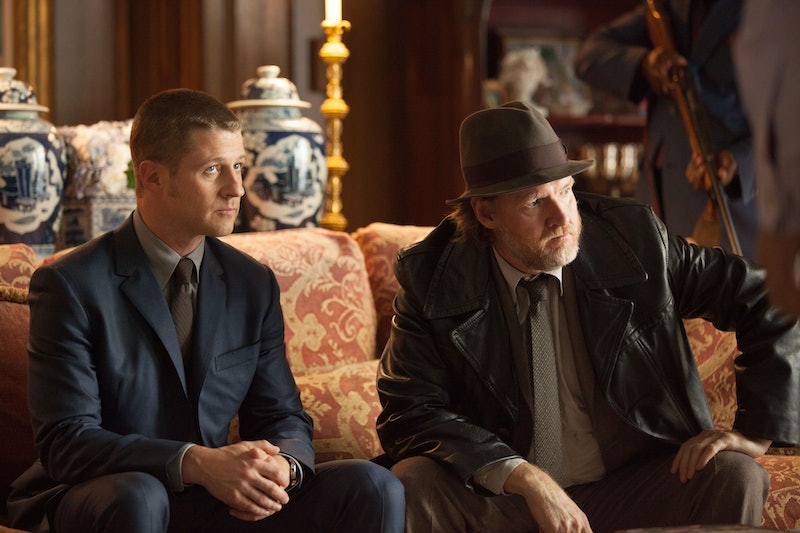 Not even 20 minutes into Monday's episode of Gotham , the mystery of the week took a turn for the gross. Gotham was introduced to a drug called Viper that gave every user super strength and a super hunger for milk — just before the drug rapidly killed them. And it didn't just kill them. Their bones collapsed inside them and their bodies collapsed along with them. You could literally hear the bones cracking as they dissolved inside people's bodies. It was gross. That sound will haunt me forever. But why did Stan Potolsky give out the Viper drug? And will the drug return thanks to Wayne Enterprises? The suspicious actions of an employee currently known only as Miss Mathis makes that practically a guarantee.

During the episode, Potolsky didn't even try to be discreet in his distribution of the drug. After testing it on a random, guitar-playing homeless man, he then started handing it out en masse to Gotham's homeless population. This resulted in some pretty sticky situations for the Gotham Police Department, who suddenly had to deal with a bunch of angry, super-powered vagrants who would go crazy on the streets and in the cells and then abruptly drop dead. By the end of the episode, it was revealed that Potolsky's endgame was to take down Wayne Enterprises. Prior to the death of Thomas and Martha Wayne, Potolsky had successfully gotten the program to develop Viper as a biowarfare drug shut down, but Wayne Enterprises revived the project right after the Wayne murders.

It turns out that Viper is the prototype to Venom, a prototype that Potolsky had a large enough batch of to distribute in small vials to people in the streets and then have enough left over to carry a revenge vat of the stuff to a Wayne Enterprises charity event. For that reason, there's a good chance that we can expect to see it back either later in Season 1 or in future seasons of Gotham. After all, not every person that Potolsky gave a vial to could have actually taken the drug. The vat that he brought to the charity event might not have been the entire batch of Viper that he had. Even worse, Potolsky had left some of the drug with a friend, which means there are other friends he could have throughout the city that are sitting on small vials of the drug.

And even if this is the last we'll see of Viper, Wayne Enterprises is still in possession of the finalized Venom drug. In fact, one Wayne Enterprises employee in particular is going to a lot of trouble to make sure the drug and any evidence thereof stays buried. When Jim Gordon and Harvey Bullock went to investigate a mysterious warehouse on the recommendation of Potolsky, they found it empty but didn't notice Miss Mathis sitting in a car nearby and talking to a stranger about how their continued investigation won't be a problem... yet. All this secrecy and conspiracy makes it seem like Wayne Enterprises might have more terrifying plans for the Venom drug than anything we saw from Viper. And considering what we did see, that's a horrible thought.