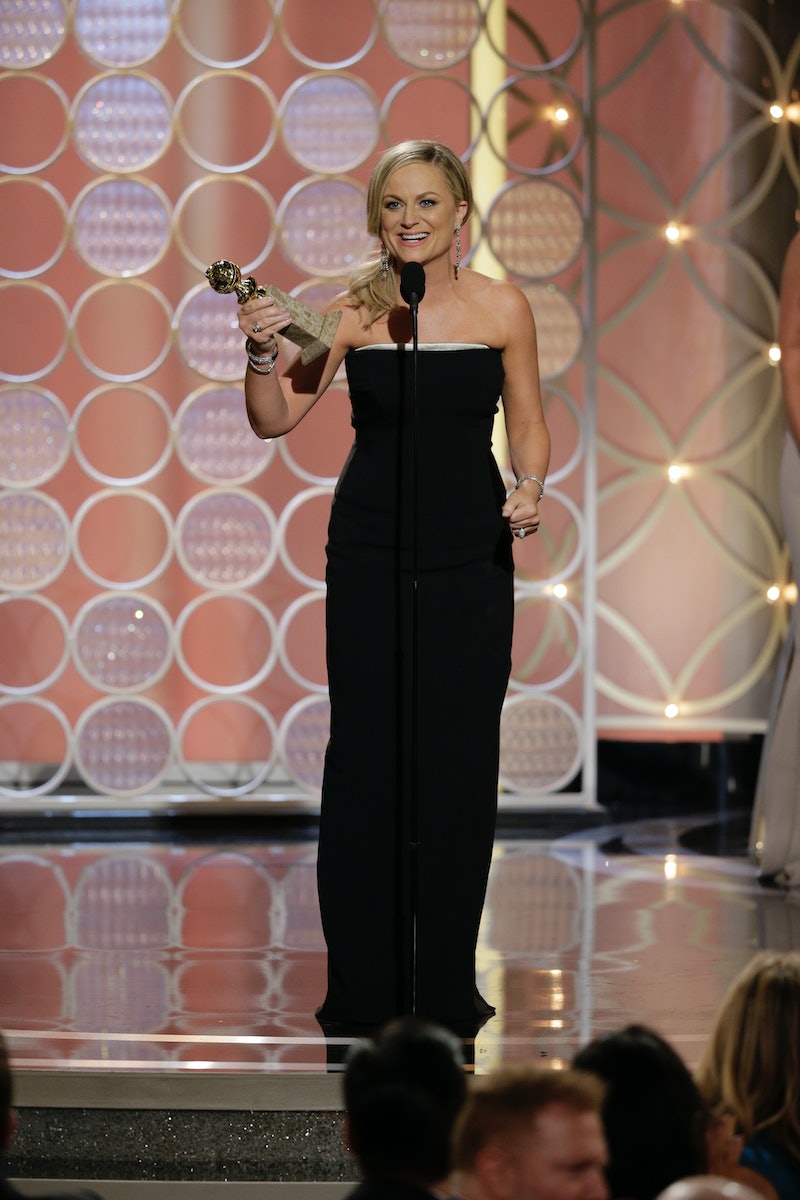 I know I've been singing the praises of Amy Poehler a lot this week, as the actor, screenwriter, and producer adds "published author" to her list of accomplishments with her new memoir/advice book, Yes Please. And not without good reason. Yes Please is an entertaining read full of humor and heart, advice and encouragement, just as one would expect from the woman behind the Ask Amy advice series. There are plenty of funny behind-the-scenes stories from Saturday Night Live and Parks and Recreation, and we get to learn more about Poehler's development as a comedian and actor. Great stuff.

But there was one moment in the book that struck a sour note with me, much as I hate to admit it. In chapter two, "Plain Girl vs. the Demon," Poehler tackles body image issues, characterizing that nasty, negative voice in our heads that tells us we're fat or ugly as "the demon." She describes how, for her, "the demon" arrived in her life in high school, and through all of her success, relationships and red carpet appearances, it's never really gone away. She catalogs all of the things she doesn't like about her body (and some things that she does), but more focuses on the negative. And as I read this chapter, my reaction wavered between disappointment and a frustration that I know she would understand.

To be clear, I wasn't disappointed or frustrated with Poehler herself. It's her book; she can write about whatever she wants. With any luck, someday, someone will ask me to write a book, and I might devote a chapter to Backstreet Boys fan fiction or my deep-seated fear of roller coasters. Whatever. When you're the author, it's your prerogative.

And I mean, I get it. I know why Poehler did this, just like Tina Fey did in Bossypants and Mindy Kaling in Is Everyone Hanging Out Without Me, and plenty of other women, comedians or otherwise, do in their memoirs. This is the moment when the glamorous movie star gets to tell the ordinary person reading her book, "I understand that there are things you hate about your body, and there are days you feel ugly, because even though I'm on TV and in movies and magazines looking GORGEOUS, I have those feelings and those days too. But don't let it get you down, know that you are a beautiful special snowflake, inside and out."

No, the source of my disappointed and frustration is the culture in which we live, the culture that compels smart, funny, multi-talented, accomplished women like Poehler, Fey, and Kaling to address their appearances in the first place. The culture that insists to women, "You can be intelligent and ambitious, but you better not think you're too sexy as well. You can't go thinking you can have it all."

Do women really still have to apologize for their success by confessing that in spite of the awards, accolades and personal achievements they've collected, they still have trouble looking at themselves in a mirror and liking what they see? Can you imagine a man dedicating a chapter in his book to how he hates how big his thighs are, and that he worries about the wrinkles that are starting to creep up around his eyes? Because I have a damn good imagination, and even I can't conjure that.

Sure, there's power in acknowledging one's insecurities and flaws, but there's also power in steering the conversation in a different direction. In Yes Please, Poehler had the opportunity to leave her appearance out of the equation, and be judged on her considerable merits alone. The fact that she did choose to include a conversation about body image (both her own and the readers') is telling. Women still have a long way to go before the playing field is level, and a woman's physical appearance is not entangled with her other accomplishments.

If I may invoke a certain influential 20th century leader, I have a dream. I have a dream that one day, women will be judged by the content of their character, and not the flawlessness of their skin. I have a dream that an ambitious woman will not feel the need to temper her success with laments about her ass being too big or her boobs being too small. I have a dream that a powerful woman will be able to acknowledge her power, and the fact that she thinks she's damn sexy as well. Or, better yet, not feel the need to say anything about her appearance at all. Ladies, if that's the kind of world you want to live in, just say Yes, Please. Because I believe if anybody can make this change happen, Amy Poehler can.