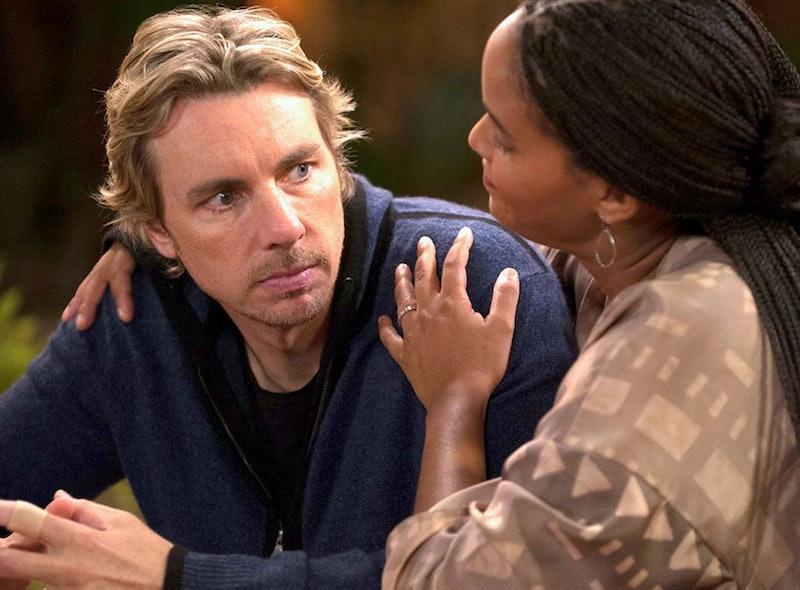 Is it just me, or is this season of Parenthood unusually cryptic? It's been a death season all along, so a bit of that was bound to happen — but they're really piling on the possibilities for horrific drama that will undoubtedly tear bits of this family apart. Every promo seems to support this, especially this week's, wherein Jasmine approaches Crosby with a tentative and scared "What did you do?" and Crosby looks on with tears in his eyes. What is going on???

The promo (below) says that this is "Parenthood at its best," showing us a (probably?) drunk Ruby and a teary Crosby. But what exactly will this episode's drama serve up? Will the season's death be introduced this episode? Or will this be something entirely unforeseen? Let's try to foresee it anyway. Here are some options for what Crosby did:

Lied about his health (Or found out something bad)

Is Crosby going to die of internal bleeding from that motorcycle accident and prove our hopefully crackpot theory from earlier this season right? It's possible that Crosby either 1) lied last episode when he was talking to his dad about his motorcycle accident and has really been dealing with his mortality after finding out that he's slowly dying, or 2) found out something bad during a check-up and is now slowly dying. Neither sound particularly cheery, but they certainly warrant cheers.

Did something bad with the Luncheonette

Did Crosby embezzle? Beat up Oliver Rome in a way that'll get his business with Adam sued to high heaven?

Killed someone with his motorcycle

Considering this did wrecked them the first time he did it, it's unlikely his relationship with Jasmine could survive another go-round. But Crosby's been in one of his immature slumps and feeling "castrated" (ugh, get over it), and that's pretty much the exact mindset he was in last time around. This time, though, he's got another kid and a life that's a lot harder to put through a divorce, so here's to hoping Crosby didn't stray.

Here's to hoping that whatever Crosby has to say is really anti-climactic.