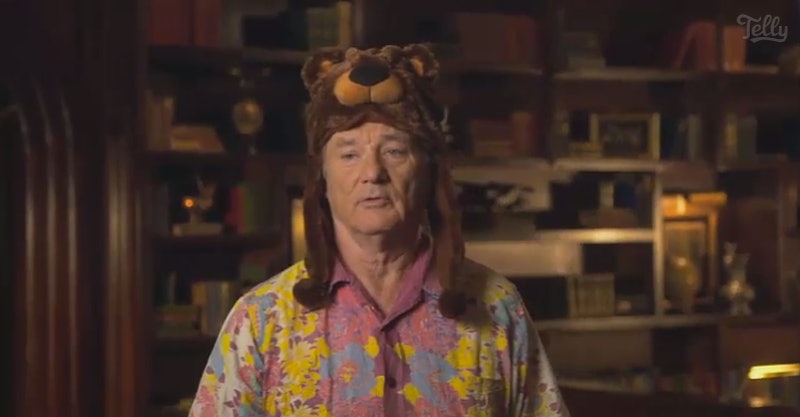 In case you aren't a football person, I'll catch you up: Today, London's Wembley Stadium was host to an NFL game between the Atlanta Falcons and the Detroit Lions. Personally, I'm not really into football, but I do love Bill Murray. And I love Bill Murray talking about football, so I guess that’s as close I’ll get to loving football. Whether football is your entire life or the thought of sports and throwing inanimate objects around makes you want to die a little bit, I promise that watching Bill Murray's video introduction to the NFL game in London will make your heart feel fuzzy. While I don’t know enough about football life to understand why it’s being played in London (see? I’m useless, I’m sorry), this all sounds very epic and exciting, even if Murray is announcing everything in his monotone (read: perfect) voice.

Murray, flawlessly wearing a bear hat and psychedelic floral shirt, first announces that the game in London is between the Falcons and Lions: “If I were an Englishman and I heard the Falcons were going to fight the Lions in public, it would sound a little too cruel for me. I would stay inside and drink beer and tea, like they do.” You speak wise words, Bill Murray.

Next, Murray tells us about the game here in the US between the Eagles and the Cardinals, whom he calls “fantastic bird teams.” Which bird does Murray prefer? The Cardinals. Obviously. Because they make great bird calls that would “strike fear in an Eagle’s heart.” A very valid reason to choose teams; I am on board with you so far, dude.

And lastly, there’s a game between the Patriots and the Bears Murray wants to know about. Which is why he’s wearing the bear hat. Ah, I understand everything 100 percent now.