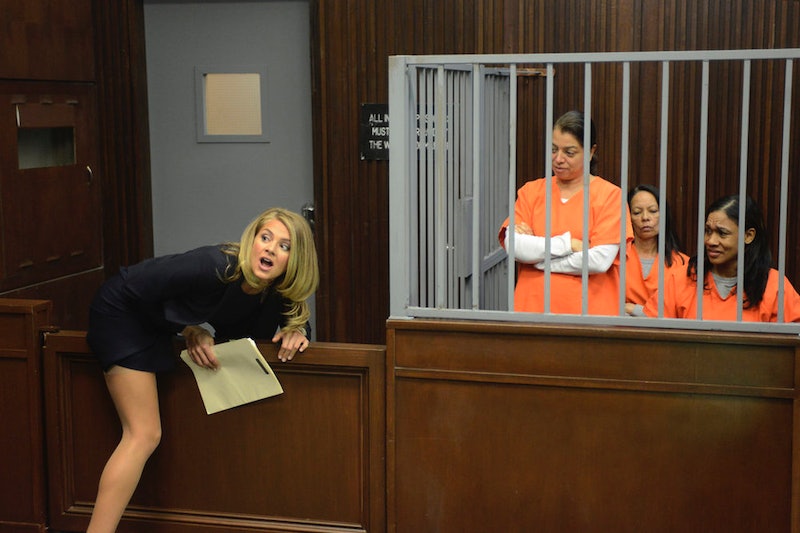 Anyone else remember a time when the USA network was all about wrestling? I promise I'm not making this up. The logo was an American flag and I wrote the channel off as being something I would never watch, because wrestling wasn't my thing. But now I'm all about USA, from the recently concluded Psych, to Suits and this summer's sitcom Playing House. The network is gearing up to premier another new snow that I promise is in now way about wrestling. USA's new fall show, Benched , is all about the chaos of a courtroom, but not just any courtroom. Happy Endings' Eliza Coupe stars as Nina who is having a small string of bad luck, not only professionally, but personally, too.We first meet Nina on what appears to be the worst day of her life — not only does her former fiancé call to tell her that he's marrying someone else, but then she's passed over for a promotion. After destroying all the breakable objects in the office, Nina quits and heads out to begin a new law career somewhere else.But, with Nina's luck she ends up working as a public defender — a far cry from her prior job at a big law firm — with a motely crew of others lawyers. She is none to pleased to be there with what appears to be the clear B team of the department, but tries not to let it get to her. That us, until in true comedic fashion, she winds up in the court room opposite her former fiancé, the judge's golden boy. The question we're left asking ourselves is whether or not Nina will be able to make this new life work.Rounding out the cast is Jay Harrington, The Office's Oscar Nunez, and Drop Dead Diva's Carter MacIntyre. Clearly, the show will follow in USA's footsteps for smart situational comedy in a very specific setting. So far, there have been twelve episodes ordered for the first season, and let's hope they renew it faster than they've have Playing House.