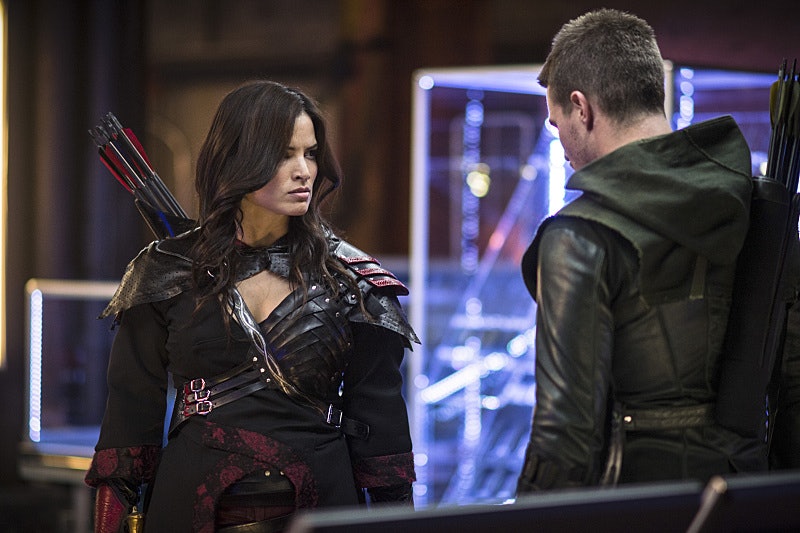 So here's the thing about Ra's al Ghul joining Arrow Season 3 — he hasn't really crossed paths with Green Arrow before. Just like we all have our own groups of friends, masked vigilantes all have their own group of super villains. For the last 50 years or so, Ra's has strictly belonged to Batman. Sure, he's popped up every very now and then in different comics for different heroes, but for the most part, Ra's is a Gotham guy. So what's he doing meddling in the affairs of Oliver Queen?

Just because the two haven't crossed paths before doesn't mean Ra's has never been a part of the Green Arrow universe. At one point, Ra's and Black Canary meet (the Laurel Lance version, not the TV-made Sara Lance version) and the two of them actually strike up a short-lived relationship. It's done and over with before anything major comes of it, and Laurel and Oliver continue being soulmates forever (because the comics don't ship our love of Oliver and Felicity, sadly enough).

Ra's army of minions, or as we know it, the League of Assassins, has made a few appearances in the a Green Arrow comics, but never with Ra's in tow. The only ruling member they sometimes have with them has been Ra's daughter, Nyssa al Ghul. And hey, she's back on Arrow now! We don't yet know where she stands with her dad — whether they're on good terms or bad terms or even if she's still part of the League — so it'll be interesting to find that out. Could she, potentially, turn into an Arrow villain herself?

It's going to be interesting to see how they integrate this character into the series, and how he's established for all future episodes, and seasons, and maybe even other TV shows too. Could Ra's make a stop at The Flash next? They're already planning crossover episodes as it is, so sharing villains seems to be the next logical step — unless Oliver sends Ra's running back home before he has the chance to take a trip to Central City.