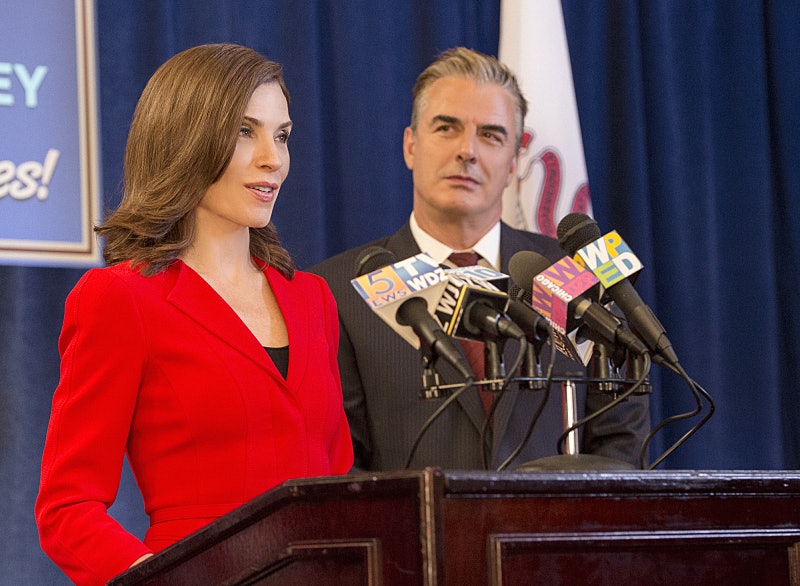 Uh oh, Alicia Florrick's got God problems. On Sunday night's new episode of The Good Wife, "Old Spice," Alicia's campaign manager told her that she needed to find religion. According to Alicia's campaign manager, Jonathan Elfman, the public simply won't vote for an atheist. Alicia maintains that her religious beliefs are none of the public's business, but deep down, she knows that's not how this stuff works. She's running for political office now! Sometimes, you just have to "play the game"...right?

During an interview with Pastor Jeremiah, a prominent Chicago religious figure, Alicia fudges the truth a bit and says that she's "open" to having people talk to her about God. Her segment ends with a prayer. Afterwards, Jonathan is pleased, but Alicia expresses concern over having to pretend to be something that she's not. Should Alicia continue to act like she's no longer an atheist in order to help out her campaign for state's attorney?

No, I don't think so. Being honest about her atheism might not be a "smart" political move, but in some ways, Alicia really is "St. Alicia" — she's just not comfortable lying about this sort of thing. Well, not yet, anyway. Maybe that will change if she ends up winning the election and spends a couple of years immersed in the corrupt Chicago political scene...

But I don't think that Alicia stands much of a chance in this election if she's forced to hide who she is. It just doesn't feel good to her. In reality, she probably wouldn't even want to win that way. It would be disingenuous. Besides, I doubt that she's prepared to keep up the charade for the entire time that she's in office. That's a pretty big commitment.

We don't know what Alicia's next move will be in regard to her religious beliefs, but I think that this is one situation where honesty truly is the best policy.