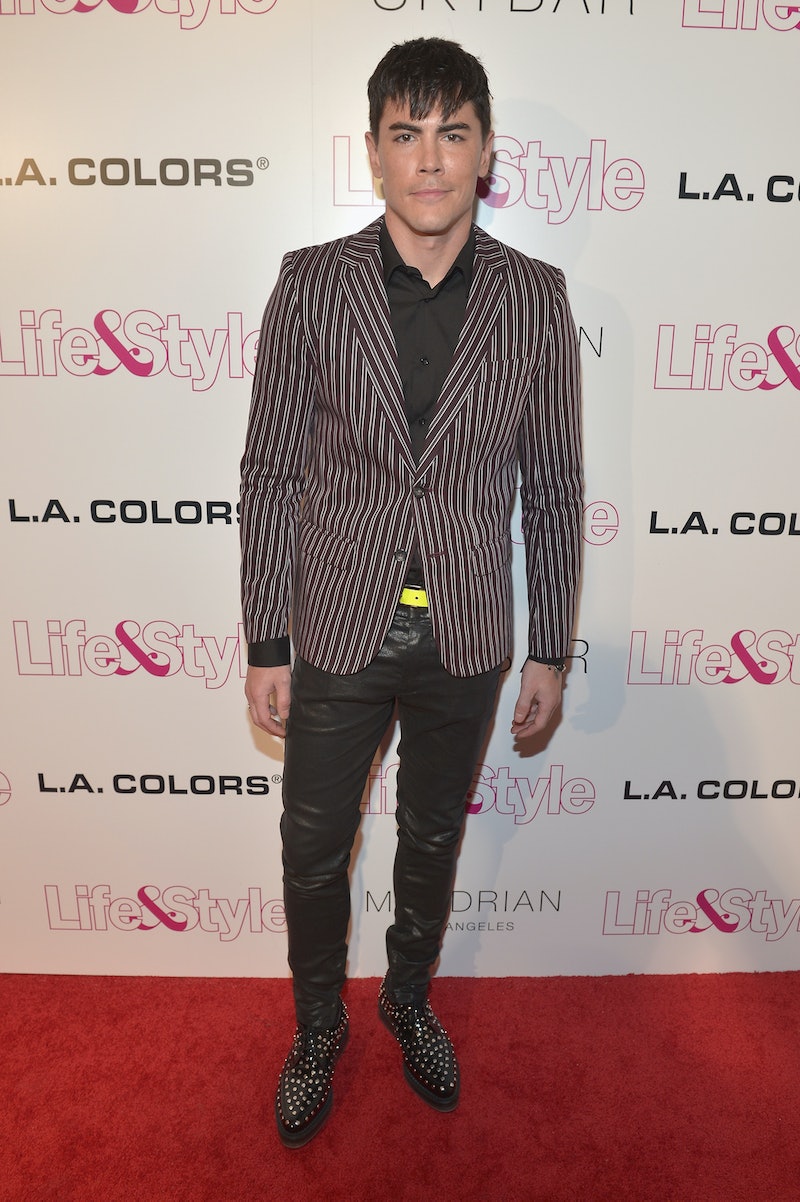 Although I can't get behind his new hairstyle, Tom Sandoval has always been Vanderpump Rules cool guy, especially once he and Kristen broke off their explosive relationship. Last season, he was put through the ringer when he and Stassi learned that their significant others (Kristen and Jax, respectively) had hooked up multiple times during their relationships (well, they say when they were both on "breaks" but I say no). Then, Tom shocked us all (me) when he and fellow coworker, Ariana, were going strong during the Season 2 reunion (I dare these cast members to date outside of their place of employment). So when we left him, he seemed to be in a healthy relationship with Ariana, and happy, but is that still the case, as we round the corner into Season 3?

The promos for Season 3 make it look like Tom might have gotten himself in some hot water. Before we get to the alleged cheating — because it isn't a season of Vanderpump Rules if one cast member didn't cheat on another cast member with another server at the restaurant — let's focus on Tom's relationship with Ariana. It seems to be going strong, although Kristen still seems to have an opinion in their relationship, because of course. And now to the fun part, did Tom cheat on Ariana in Miami? Because a girl — who I'm sure will be in Season 4, if she plays her cards right — is seen accusing Tom in the promo, which he vehemently denies. But as the entire cast says, the truth will indeed come out — and maybe even in a FaceTime call where Tom can be seen crying apologizing for something. Crazy kids.

Here's what Tom Sandoval has been up to recently, and what we can see from him in Season 3.

As I mentioned before, Tom and Ariana seem to still be going strong, so whatever happened in Miami must be reconcilable. They seem to be doing so well that Tom has been inspired to write iPhone poetry. Hey, when the inspiration hits you, you got to jot those ideas down.

He and Jax are friends?

After the crazy Season 2 finale when Jax admitted to sleeping with Kristen, and the even crazier Watch What Happens Live when Tom called in and tore into Jax's bizarre person, there is this. The caption makes it seem like Jax is the "old" that is being sent "out," but who can really decipher those V Pump cast members' Instagram captions.

Kudos to Tom for being famous enough to throw out the first pitch at a St. Louis Cardinal's game.

According to this Instagram and IMDB, Tom is starring in a new TV show called Social Status . The plot line for the show describes the show as: "3 recent college grads, and long time best friends embark on the real world punching a time card while trying to find their dream job, make a living, and spice up their social life." Does that sound familiar to you? Because to me it screams Workaholics, but what do I know about television shows? Either way, this could be Tom's big break, assuming the show gets picked up and sold to a network.