Cohen told Sandoval that after Taylor watched the aforementioned episode, he finally felt bad about hooking up with Kristen Doute. Watching that ep is what it took for the ol' Jax-bot to feel things. Cohen asked Sandoval if he believes that Taylor is guilt-ridden. Sandoval said yes. Taylor apologized for sleeping with Doute. Sandoval apologized for bloodying Taylor's face. They wept. I wept. It was beautiful.

Oh, nope. That's maybe the opposite of what happened. What actually went down: Sandoval laid into Taylor for being a feelings-less cyborg with a secret backstory. YES!!!! Who needs resolution, anyway? I hope this conflict/this show lasts until the end of time.

“Well, no, I don’t [believe Taylor feels guilty],” Sandoval said. “I think maybe Lisa did some talking to Jax and said, ‘Hey, listen. You’re going to look like an asshole if you don’t maybe say that.’” Classic Sandoval. Always running with a theory!

“No, not at all. Hey, listen. He’s on his own with this one,” Vanderpump interjected. “You saw at the reunion, I was like, ‘Do you feel remorse? Come on, I want to see it if you feel it.’”

Taylor could've been singing "The Lonely Goatheard," but Sandoval wouldn't have noticed. Sandoval was not paying attention. Sandoval had too much stuff to get off of his chest to listen to Taylor's words.

“You know, Jax, the whole season, you pretty much made it your job to throw me under the bus,” Sandoval interrupted. “And you know I have all this dirt and all this stuff about you…”

Vanderpump began massaging her temples. The phone call was beginning to take its toll on the Queen of SUR.

“I’m curious if you wanna answer the question why you moved to L.A. from Miami and changed your name from Jason to Jax?” I'M CURIOUS, TOO. Thank you for the hard-hitting question, Sandoval. I’ve been wondering about Taylor/Miami for a while. ("A while" = "A week.") WHY DID HE MOVE AND CHANGE HIS NAME? What’s he hiding? What’s his secret? What's his deal? What made him the probably-sociopath that he is? I'm ITCHING for answers.

Who Is Jason From Miami & What's His Secret?

Sandoval's vague accusation made Taylor visibly uncomfortable. Even so, Taylor and Vanderpump dismissed Sandoval’s remark. Unfortunately, I cannot dismiss Sandoval's remark. My new mission in life is to unearth the Jason/Jax origin story. I will not rest until I know the truth.

When asked if he feels bad for slugging Taylor, Sandoval said he doesn’t.

“You made him feel something. Right,” Cohen finished. Cohen was DONE with the call.

Sandoval did not take Cohen’s hint. Sandoval continued talking. Cohen attempted to cut him off again. But again, Cohen's hints were useless. He kept talking over Cohen. Cohen tried to throw to commercial. Sandoval’s voice only grew louder. The commercial throw could not go on. Taylor looked STEAMED. Cohen realized he’d lost control of the Clubhouse. This was Sandoval's Clubhouse now.

Or was it? Aha! Cohen had a plan. He did the only thing he could do in a time like this: give double finger guns to the camera and say, “I gotta go to break, my brother.” It worked! Control of the Clubhouse had been regained. 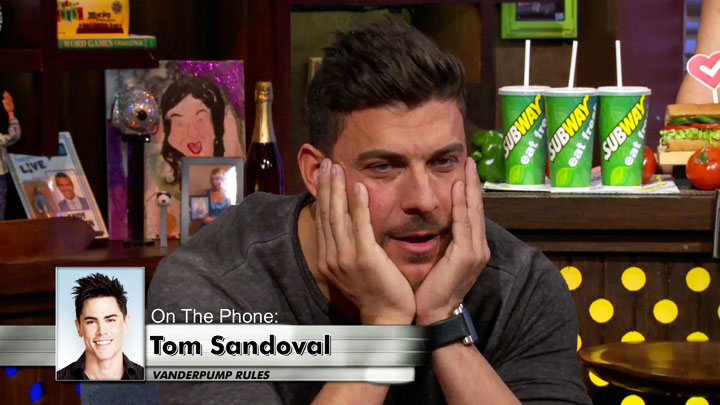