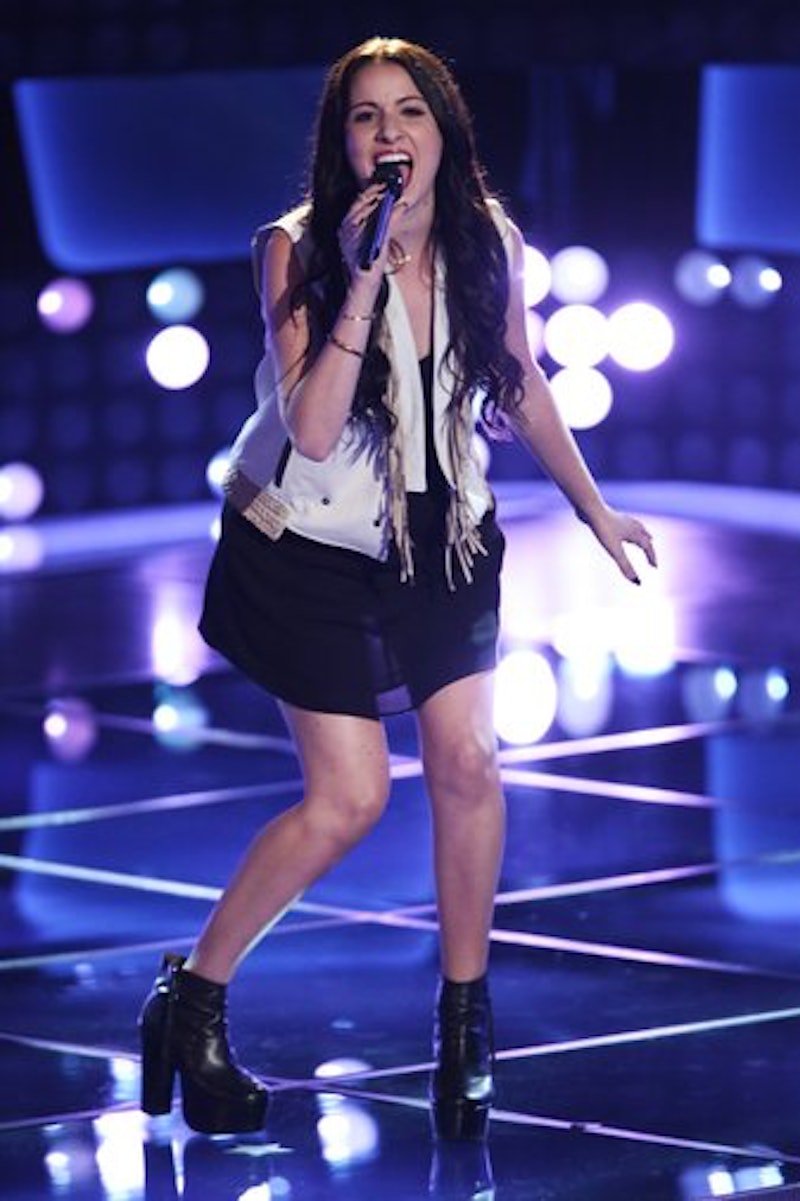 When Sugar Joans, an L.A. native with a massive personality, breaks out Beyonce's Love On Top for The Voice's knockout round, there is not one doubt in my mind that she will bring the house down. Sugar Joans' blind audition might have been one of the most shocking two-chair turns I've ever seen — not because I was surprised two coaches turned for her, but because I cannot believe they didn't all turn. And even still, Blake Shelton and Gwen Stefani didn't turn for Sugar until it was almost too late. Upon meeting Sugar Joans, I immediately admired the courage it must have taken to choose such a big song, and then for her version of Chain of Fools to seem so effortless was especially inspiring. Heading into the knockouts, Team Gwen would be at a serious loss not to stick with Sugar.

Even more notable than her two flawless performances so far is her determination to make it in the industry without her father's resources. Sugar's most admirable quality is that her father has had a long and successful career in music, and yet she insists on designing her own path and doing so on her own terms. Despite the show's premise to be primarily about the "voice," no one can deny that at some point we as the voters eventually look at the whole package and Sugar has exactly that.

SHE MOST DEFINITELY HAS THE VOICE

Everyone likes a little rasp and Sugar's tone is undeniably sexy. From the first note she sang on the show, you can tell the girl's got raw talent and plenty of training. She already knows how to control the growl in her voice and hits notes that immediately lift some hairs off your arms. The world needs a little more R&B nowadays and Sugar has a unique enough voice to make it there. With Gwen's direction, Sugar could end up being an unstoppable force on the show.

SHE HAS A NAME MEANT TO BE IN FLASHING LIGHTS

Admittedly, I know Sugar isn't actually her name because her YouTube channel is suspiciously labeled "Sophia Louise," but come on: Sugar Joans?! She already sounds like a famous girl and the name couldn't suit her more perfectly. If you want to make a name for yourself, don't let anyone forget your name. With 24 contestants left going into knockouts, of course it's hard to keep track. But I'm willing to bet this is one of the only Voice names you'll recognize this week without having to see her picture. Now, that's what I call quite literally making a name for yourself.

SHE HAS A LEGACY SHE'S READY TO CARRY OUT

I don't want to sound redundant by restating the obvious: how cool it is that she wants to make it without her famous dad's help. Instead, I'll elaborate by saying she has a leg up regardless of whether the coaches knew about her father. Hailing from a musical family, she came into this competition already every coach's dream contestant. She knows her influences: Stevie Wonder, Otis Redding, Aretha Franklin, The Beatles. She knows her avenue: R&B and soul. And finally, her performances are tight and flawless. Sixty seconds into her audition, no one had turned for her, and yet she kept the audience on her side. She had no intention of giving up then and she most certainly isn't going to now.