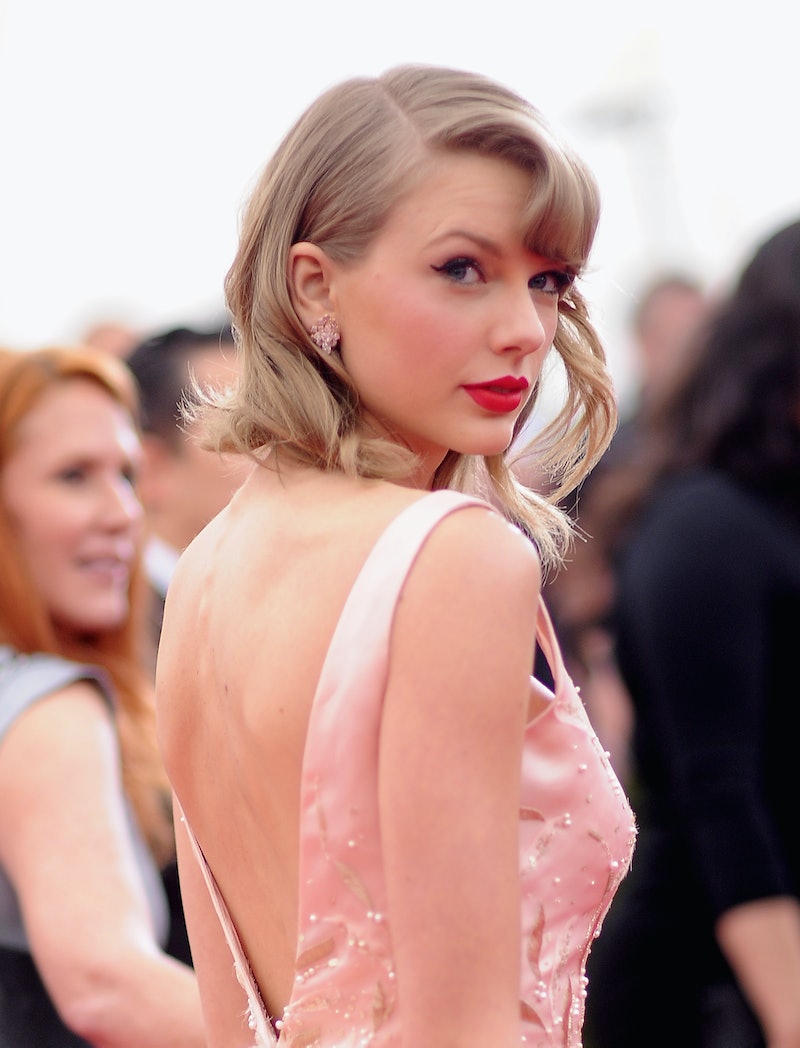 Let it never be said that Harry Styles isn't inspirational. Although Taylor Swift herself has stopped naming names, there are at least four songs on her brand new album 1989 that seem to be entirely about, or vaguely inspired by, Styles: "Out of the Woods," "Style," "Blank Space," and possibly bonus track "Wonderland." However, in addition to an album full of songs we'll all have on repeat for the rest of the year, Swift also shared 1989 hidden messages in the album booklet for those who cared to flip through it. I don't know about you, but having read all of the messages, I'm starting to think that she's making another allusion here. But are Swift's 1989 secret messages about Styles? It's highly likely.

Here is the story that the secret messages tell.

We begin our story in New York. There once was a girl known by everyone and no one. Her heart belonged to someone who couldn’t stay. They loved each other recklessly. They paid the price. She danced to forget him. He drove past her street each night. She made friends and enemies. He only saw her in his dreams. Then one day he came back. Timing is a funny thing. And everyone was watching. She lost him but she found herself and somehow that was everything.

Each sentence corresponds with one of the 13 tracks on the album, from "Welcome to New York" to "Clean." So is this story about Styles? Well, maybe. Swift and Styles first met backstage at the Kids' Choice Awards in California in early 2012, but their love story really gained traction when the two were seen taking a walk through Central Park together. That's certainly one way to begin your story in New York about a girl known by everyone and no one.

Even more damning is the fact that the description of Styles as "someone who couldn't stay" would fit even if their relationship hadn't been short-lived. Both Styles and Swift are incredibly famous pop stars, which means that between their tours and both their reputations for bouncing in and out of relationships — whether or not those reputations are justified — any relationship between the two of them would have been difficult to make work. That could be the real reason that they paid the price and she had to dance to forget him, rather than any of the rumors that flew at the time about Styles dumping Swift for being a "prude". (Does he seem like that type? Really?)

However, the rest of the story from there is more open-ended. As far as we know, there has been no great reunion between Swift and Styles — or has there been? After all, when "Out of the Woods" was released and rumored to be about Styles, some fans might have expected this to be another one of Swift's incisive ex songs detailing everything that was wrong with the relationship. However, it was sweet and surprisingly poignant, perhaps even a bit hopeful about their future. Then came the rumor that Styles had written "I Love You" about Swift, a song that is equally sweet and poignant. Combine that with the snowmobile accident line from "Out of the Woods" that Swift said was there to show that a lot goes on in her life that people have no idea about and it seems pretty likely that these two estranged exes have definitely met up and buried the hatchet somehow.

Do these secret messages indicate that a Haylor reunion is in our future? I would doubt it, honestly. Swift might have (possibly) devoted a whopping four songs and a hidden story to him and her relationship with him, but it's more than likely because he was her last romantic encounter rather than because she wants him back. She has always drawn the material from her songs from her own diary pages and experiences and Haylor seems to have been quite a whirlwind experience for her if all of this new music is any indication. If I had to guess, I would say that these songs are Swift's way of sorting out her own emotions about the entire affair now that she can look back on it with some objective clarity. After all, "she lost him but she found herself and somehow that was everything."