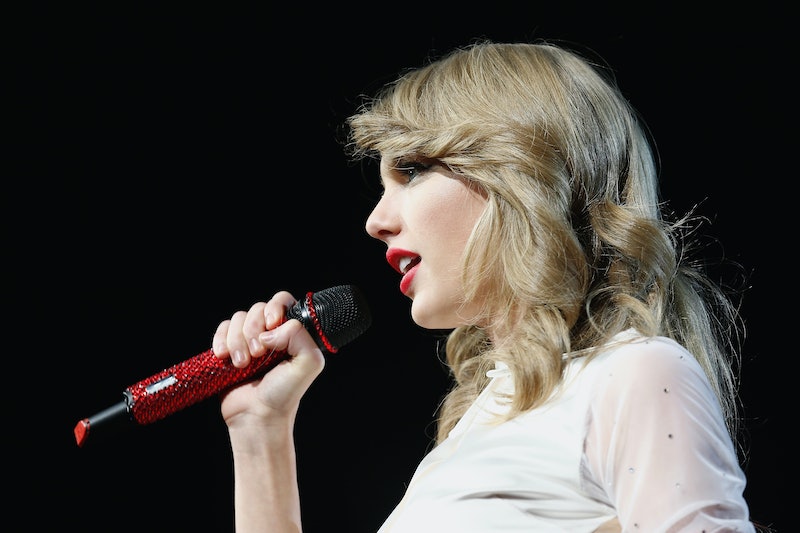 Every time that Taylor Swift announces that another song from her upcoming album 1989 is headed our way, everyone waits with feverish excitement. Even if you weren't a fan of Swift before, 1989 is proving to be unlike any album she has ever done, and thus each of her songs is worth checking out just to see what her new sound will be like. Her next song is called "Out of the Woods"; it isn't her second single, but it has been trending on Twitter since its release late Monday night. But does it answer the question on everyone's minds? Is "Out of the Woods" about Harry Styles?

But as to whether or not she's talking about her relationship with Styles specifically, that's anyone's guess. The hypothesis was first put forth by Rolling Stone writer Josh Eells, likely because Styles is one of Swift's exes that she has yet to write an explicit song about yet. However, "Out of the Woods" remains pretty general except for references to seven specific events during the lyrics. Do they have any connection to Styles? The answer is yes.

"We were lying on your couch, I remember. You took a Polaroid of us."

Is Styles a huge fan of Polaroids? I'm not Directioner enough to know for sure. There was that one time, at a One Direction concert in 2014, where a fan threw a Polaroid camera onstage that Styles proceeded to use to take a picture of his butt, but I'm not sure that counts. Then again, I suppose it could have been Swift's Polaroid camera.

"Last December, we were built to fall apart."

Swift and Styles' relationship — the rumors and the confirmation — happened mostly during the fall and winter of 2012. Very, very coincidental, wouldn't you say?

"Your necklace hanging from my neck."

In November 2012, rumors of the relationship between the two was further fueled when Swift and Styles began wearing matching necklaces. It's practically the modern-day equivalent of wearing a Letterman jacket and his class ring.

"We decided to move the furniture so we could dance."

We all know how much Swift loves to dance. Her first single, "Shake It Off," was all about that after all. Styles himself isn't much of a dancer, as he and the other boys of One Direction are prone more to walking around the stage and eating in between songs than they are to complicated dance numbers. However, his personality seems in line with moving furniture around to dance.

Remember when I just mentioned that Swift and Styles were wearing matching necklaces? The necklaces were paper airplane pendants. We may as well stop right here, because this is pretty much all the proof we need that Styles was the inspiration for "Out of the Woods."

"Remember when you hit the brakes too soon, twenty stitches in a hospital room."

This is a mystery event that we can't confirm or deny either way, since it was specifically noted by Swift as having been put in to show there are parts of her life that her fans don't know about. Sounds painful, though.

The details about Swift's split with Styles are pretty unclear. One rumor states that he broke up with her because Swift was too, shall we say, wholesome, while another rumor states that she broke up with him when Swift suspected Styles of cheating on her. Although the two haven't hung out much since, they've seemed amicable enough. "Out of the Woods" isn't the wrathful song of a woman scorned, so it's quite possible both rumors are untrue and this is the real truth. Swift broke up with Styles for both of their goods.

So it's safe to say that "Out of the Woods" is definitely going out to Styles, but listen to the song over at JustJared and decide for yourself.